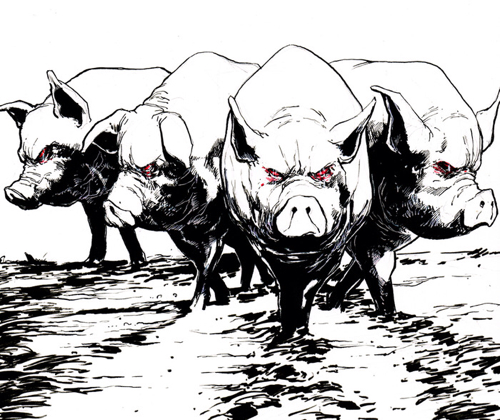 Zombies. How many more permutations can there be?

The Walking Dead and Dead Roots are just two examples of this horror staple translated into fine comics that we’ve mentioned here recently on downthetubes, but there are many more… 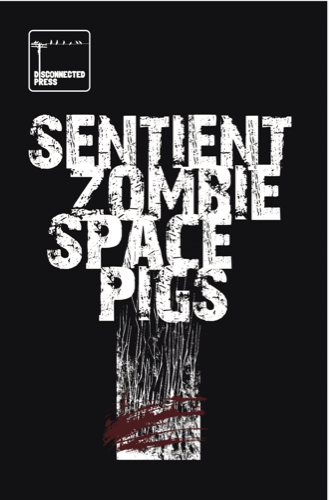 — although none, perhaps, as well realized and as superbly delivered as Sentient Zombie Space Pigs, the latest title from British indie publisher Disconnected Press, written by Lizzie Boyle and drawn by partner Conor Boyle.

I bumped into the pair of them this weekend at London Film and Comic Con, and Conor, whose work some of you should know from ace indie anthologies such as Zarjaz and Futurequake, kindly gave me a copy of what he described as their latest “serious” work… And then he and Lizzie burst into uncontrolled laughter.

As will you, I hope, when you buy a copy of this hilarious dark humour horror title – and I strongly do urge you to buy it, because it’s one of the best-realized black and white indie titles I have read in a while.

When old Harlan finds an intruder on his property… Well, they’re intrudin’ on his property. He exercises his right to defend his family and farm, and sets off a chain of events that the local community wouldn’t ever dream of. Mostly because they’re a bit stupid.

Sentient Zombie Space Pigs is a hilarious cautionary tale about being nice to strangers and watching what you eat. It’s also a tongue-in-cheek salute to some projects that perhaps look to make a profit before making something worthwhile. Other than that, it does what it says on the tin.

Lizzie Boyle is a writer of comics and fiction. She produced Lost: Boys and How To Kill Bears for Disconnected Press and has also been published in FutureQuake’s Something Wicked, target=”_blank”Hallowscream, Dr WTF!? and Disconnected, Volume 1.

Her short fiction was published in the Bristol Short Story Prize anthology in July 2012, and she has been shortlisted for the Fish Publishing Short Story Prize, the Frome Short Story Competition and the Flash500 Flash Fiction Competition. Her comics work will soon feature in Unseen Shadows, Into The Woods 2 and Zarjaz, and in Do Aliens Play Basketball?, due out from Disconnected Press in November 2013.

Conor Boyle‘s debut graphic novel Who On Earth Was Thaddeus Mist? was published by Accent UK in 2012. A second, Pirates of the Lost World, will be published by Markosia in 2013. He is part of the artistic team for Barry Nugent’s Tales of the Fallen, drew Dark Judgements 1 and 2 for FutureQuake Press, and has contributed to Disconnected, Volume 1, The Psychedelic Journal of Time Travel and, of course, the fantastic-looking shared worlds zombie anthology Dead Roots.

I’m very pleased to learn that he’s currently working on a graphic novel for the National Trust for Scotland due out in 2014.

Happily poking holes in every single zombie and horror trope you can think of, this comic tingles with its combination of crisp, well nuanced script and some of Conor’s finest art to date. (Conor is one of those artists who really should be paid to draw more often, and, having thoroughly enjoyed Space Pigs, I definitely want to read more of Lizzie’s stories).

Yes, you’ve guessed it – there is nothing serious in the slightest about Sentient Zombie Space Pigs. But it’s a cracking comic nevertheless, with a darn fine script and fantastic art. So what are you waiting for? Head over to the Disconnected Press web site now and buy a copy!