Marvel’s Revolutionary War – Dakin, Elson and Erskine on board 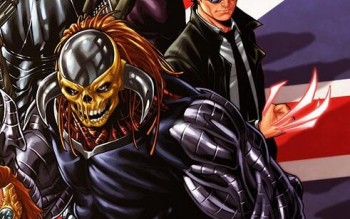 The London Film and Comic Con featured two Marvel UK-related panels, the first a general celebration of the company’s US comics projects such as Death’s Head II and Warheads, attended by Stephen Baskerville, Alan Cowsill, John Freeman, Simon Furman, Andy Lanning, Geoff Senior and Steve White. We covered some of that in our earlier report.

The second panel, reported extensively by Jon Carpenter on Starlogged, focused more on the revival of those characters in next year’s limited series Revolutionary War, the brainchild of Andy Lanning and Alan Cowsill.

The pair broke the news that both Death’s Head characters will feature, in a special team up that will also see appearances by all the major Marvel UK characters created back in the 1990s.

Andy and Alan are the writers on the opening and closing books of the series (titled Alpha and Omega), to be drawn by Richard Elson, and the project will be edited by Stephen Wacker, who has said he wants to retain the UK feel of the original.

Setting the scene for the new series, Andy explained that an undefined period of time has passed since the original sub-universe and the heroes main protagonist in the original stories, the mysterious Illuminati-styled MyS-TECH organisation, have been defeated.

In a parallel with the real world events at Marvel UK following the company’s collapse and absorption by Panini, S.H.I.E.L.D have crossed the Atlantic and Nick Fury has cherry-picked the heroes he wants to work with – such as Captain Britain and MI-13  – and S.H.I.E.L.D has shut down the rest.

Since the weekend, Andy has told me the running order for the books between Alpha and Omega has not been confirmed (but will probably be after New York Comic Con). But the creators on the other individual books are Glenn Dakin on Motormouth (who wrote issues of the original series) and Lanning and Cowsill on Warheads (drawn by Gary Erskine, who drew the original series first two issues and designed the look of the book).

Andy will also write Death’s Head, which will be drawn by Nick Roche, while Dark Angel will be written by Iron Man scribe Kieron Gillen and Knights of Pendragon and Super Soldiers by 2000AD writer Rob Williams.

Mark Brooks will provide the main covers for the series but each issue will also have alternate covers with Dave Gibbons drawing the Super Soldiers cover and Liam Sharp drawing a Death’s Head cover. 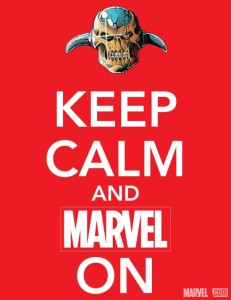 Andy and Alan say they’ve been given free rein on the project, working with the other writers involved on its overall direction.
If the series is a success, Andy hopes Marvel may revisit the characters (and look again at Marvel UK continuity, which dates back to the 1970s.
He also hinted that reprints of the original material might be on the cards.
At the celebration panel, Steve White, now Senior Editor at Titan Comics, expressed his hope for a fuller revivals of Knights of Pendragon, while artist Stephen Baskerville suggested Gene Dogs, which was originally written by John Freeman and drawn by Dave Taylor.
• Jon Carpenter’s original report is here on his Starlogged blog
Post Views: 1,047

‹ This World Has Teeth: A Chat with Ian Edginton
Top 10 Most Popular Stories so far this week ›