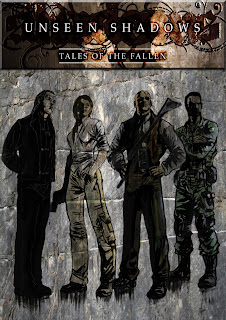 Barry Nugent’s rapidly expanding Unseen Shadows universe, which encompasses novels, comics and audio drama, has another addition on the way – a Tales of the Fallen anthology, hopefully due for release at the Thought Bubble in Leeds in November.

Barry tells us artwork is coming in from left, right and centre for the book which will come wrapped in a cover by Rob Carey (right). Writer Cy Dethan also offers this synopsis of the book:

They are murderers, martyrs and mercenaries in the no-man’s-land between adventure and crusade – soldiers of fate and fierce honour, bound together in mystery, darkness and blood. Their enemies are shadows haunting the outermost borders of a darkening world, and as night approaches the shadows grow long.

They are the Fallen, and these are their stories.

The Unseen Shadows universe kicked off with the Fallen Heroes novel – a follow-up, Forgotten Warriors, is on the way. It’s a project that has also spanned comics, CDs and even, soon, a series of live action web episodes is currently being planned in conjunction with Zzizzl Media. 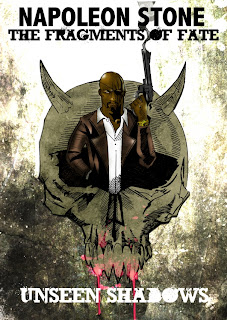 “Originally Fallen Heroes was called Unseen Shadows but the more I worked on the story the more I felt that the title was a little too overarching to fit one book,” says Barry of the project. “I knew I was going to tell this one huge adventure spread over three books and so Unseen Shadows became the overall theme for that story.

“Now with the ongoing work to expand the world and characters I’ve created via the mediums of comics, audio and live action it made sense to bring the term ‘Unseen Shadows’ more to the forefront. I know a lot of people, myself included sometimes, still refer to everything involved with the project as Fallen Heroes but in truth everything being worked on is part of the Unseen Shadows universe. It was one of the reasons I decided to launch a new website to try to reinforce that message.

“The really exciting thing for me is how the spin-off work has affected me as I work on the second book in the trilogy, Forgotten Warriors,” he continues. “I found myself subconsciously referencing events in the spin-off scripts as if they were canon and then the thought occurred to me ‘Why don’t I just make them canon’.

“So now every member of the creative team knows that their material is 100 per cent a part of the Unseen Shadows universe and not just a nice little side story with no impact on the events surrounding it.”

“The spin-offs expand and enhance the characters lives and relationships within the novels,” says Barry. “Although the books and the spin offs can be read and enjoyed independently of each other you will get more insights into the characters by experiencing all the stories across the Unseen Shadows universe. At least that is the plan we are all working towards.

“You want to know more about the how the Reverend was trained to become the man we see in Fallen Heroes? Then you Cy Dethan’s The Reverend: Wrath of God comic. If you’ve ever wondered how did a decorated solider like Clancy become a mercenary then Dan Thompson’s Clancy Wallencheck: Band of Butchers is for you. Desperate to learn about the inner working of the Icarus Foundation? Alan White’s Tales of the Fallen: Empire of Blood audio drama is the place to begin your education.”