Home › downthetubes News › downthetubes Comics News › Comics By Country › British Comics › Roll Up for Roll Out with Furman, Senior and more this Sunday

Roll Up for Roll Out with Furman, Senior and more this Sunday 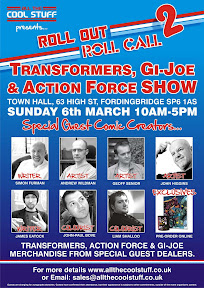 “I can’t remember the last time Geoff, Andy and I were all together at an event,” says Simon, “and John Higgins (who provided amazing Transformers covers and posters — anyone remember that amazing snowy Dinobots scene he painted for TF-UK?). It makes it a line-up not to be missed.”

Simon’s work with Transformers has spanned across Marvel UK, US, Dreamwave, Titan Magazines and IDW comics, while both Geoff Senior and Andrew Wildman have helped visualize some of Simon’s best known work.  Both Geoff and Simon were the creative force behind Simon’s cult bounty hunter character creator Deaths’ Head, and Andrew worked on many other MUK favourites including Galaxy Rangers, The Real Ghostbusters and Thundercats.

All three worked on Action Force during the ‘International Heroes’ era.

John Higgins might best known for his work on 2000AD and as the colourist for Watchmen, however he was also involved with Marvel UK’s bid for Action Force during the Palitoy years and, as Simon notes, provided many covers for the Marvel UK Transformer comics.

A late addition to the line up is artist Martin Griffiths, a legend for the Marvel UK Thundercats comic, but who also worked on Transformers.

Joining them will be colourists Liam Shalloo and John-Paul Bove, the current regulars for IDW comics, having worked on Transformers titles. 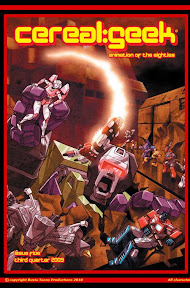 Also at the event will be James Eatock, the editor of cereal:geek magazine (currently hyping its upcoming seventh issue) and the fountain of all knowledge on cartoons of the 1980’s, who will be on hand to showcase the publication and its truly amazing artwork.

• Tickets for the event will be available on the door. For more information on event art exclusives and trading affiliates, check out the All The Cool Stuff site here