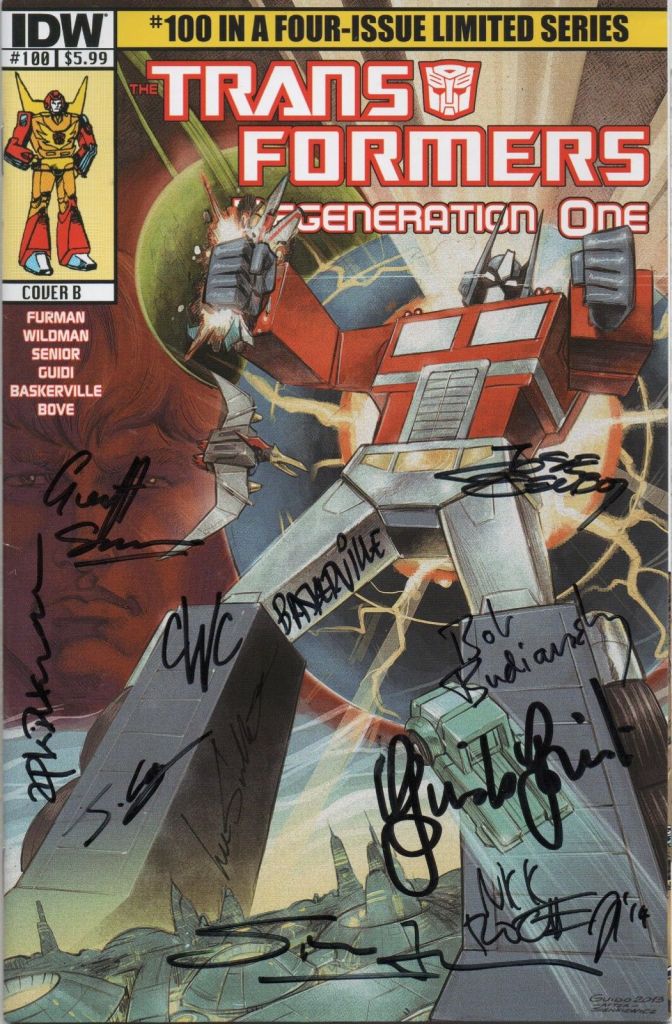 Key comic creators involved in bringing Transformers to the comic book page, some over the past three decades, have banded together to offer a special Transformers #100 very limited multi-signed issue, to raise funds to aid US comic author Bill Mantlo.

This a very special auction of the IDW-published #100, to raise funds for the ongoing healthcare of the former writer, who wrote the original Transformers book published by Marvel Comics in 1984. As a mark of respect and affection for Bill in this 30th year of Transformers they are offering thirty signed copies of the Transformers Regeneration One ‘Issue One homage’ cover with art by Guido Guidi via eBay.

Each will come with a numbered Certificate Of Authenticity.

William Timothy Mantlo (born 9th November 1951) is best known for his work at Marvel Comics, on two licensed toy properties whose adventures occurred in the Marvel Universe: the Eagle Award winning Micronauts and the long running Rom, as well as co-creating the original character, Rocket Raccoon who these days features in both the Guardians of the Galaxy comic and film.

An attorney who worked as a public defender, Mantlo was the victim of a hit-and-run accident in 1992 and has been in institutional care ever since.

• Last year, artist Greg Pak posted a tribute to Bill on his web site, urging Guardians of the Galaxy fans to support the fund raising efforts co-ordinated by the writer’s brother, Mike. If you’re not a Transformers fan, please consider donating via the link below:

In February this year, Bleeding Cool reported that Bill’s brother Mike has said, “Bill was treated in an exceptionally fair manner by Marvel/Disney” and that Marvel “has made incredibly generous gestures,” to hep him. But the cost of Bill’s care remains enormous and any donations you care make will be greatly appreciated by the family.

Cards, letters or donations to Bill Mantlo can be sent to: