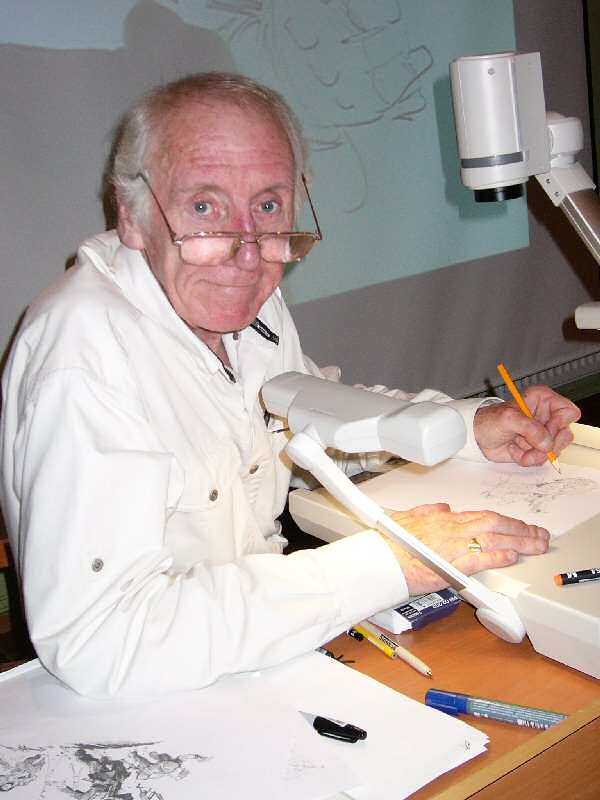 John Cooper at the Raptus convention in Bergen in 2003.

We’re sorry to report the passing of British comics artist John Cooper, who died after a short illness on Sunday 22nd February. His huge and influential list of credits include work for numerous titles, including TV Century 21, Valiant, 2000AD, the 1990s Eagle and many other titles.

Younger readers than me should remember him for his long run on the “Action Force” strip in Battle, when the weekly title was Battle Action Force prior to Marvel UK getting the licence.

I met John and his partner, Lesley, just once, having persuaded him to travel to Bergen in Norway for the annual Raptus Comic Festival in 2003. It proved a thoroughly enjoyable encounter. I was never able to work with him as an editor, although we came close on occasion to doing just that.

I’m sorry that we’ll now not get that chance and my condolences to his family and friends at this sad time. He will be much missed.

Born in Featherstone, West Yorkshire in 1942, John divided his time between running the family pub and attending Wakefield Art College in his early years, before getting a job with a design studio in Leeds.

“I began drawing as early as I can remember,” he told Terry Hooper of Comic Bits Online, “and I read comics as soon as I could read.” 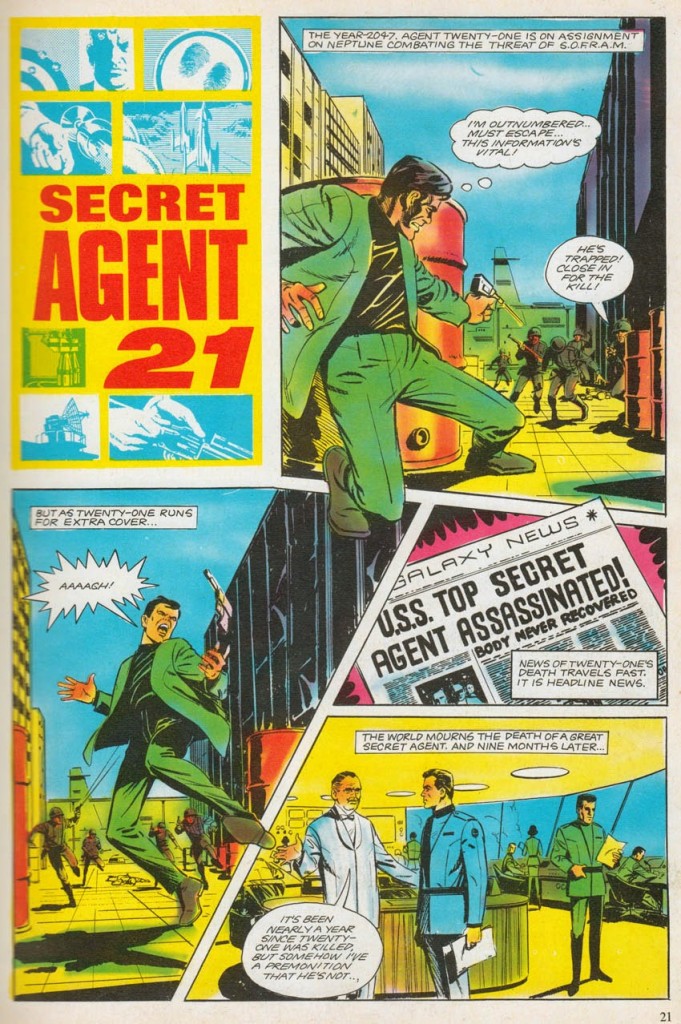 He went freelance in 1963, aged 21, signing for Billie M. Cooper, an agent in London (who was no relation). Although he had numerous humour strips published in the early 1960s, his first published adventure strip work was a “Secret Agent 21” for the 1968 TV Century 21 annual. He worked regularly ion the title between 1966 and 1969, drawing strips such as “Captain Scarlet” and “Thunderbirds” and the title strip for Lady Penelope comic. 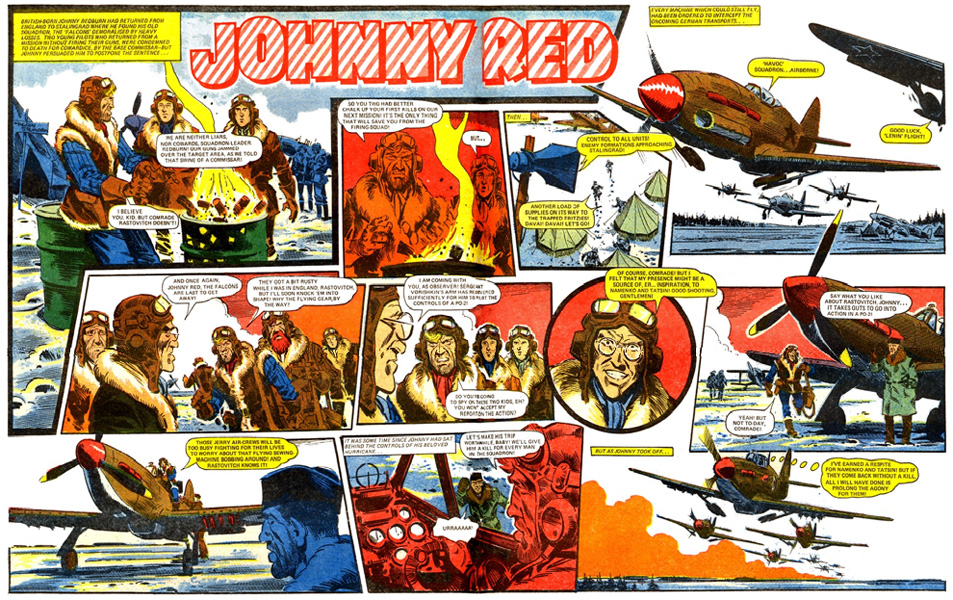 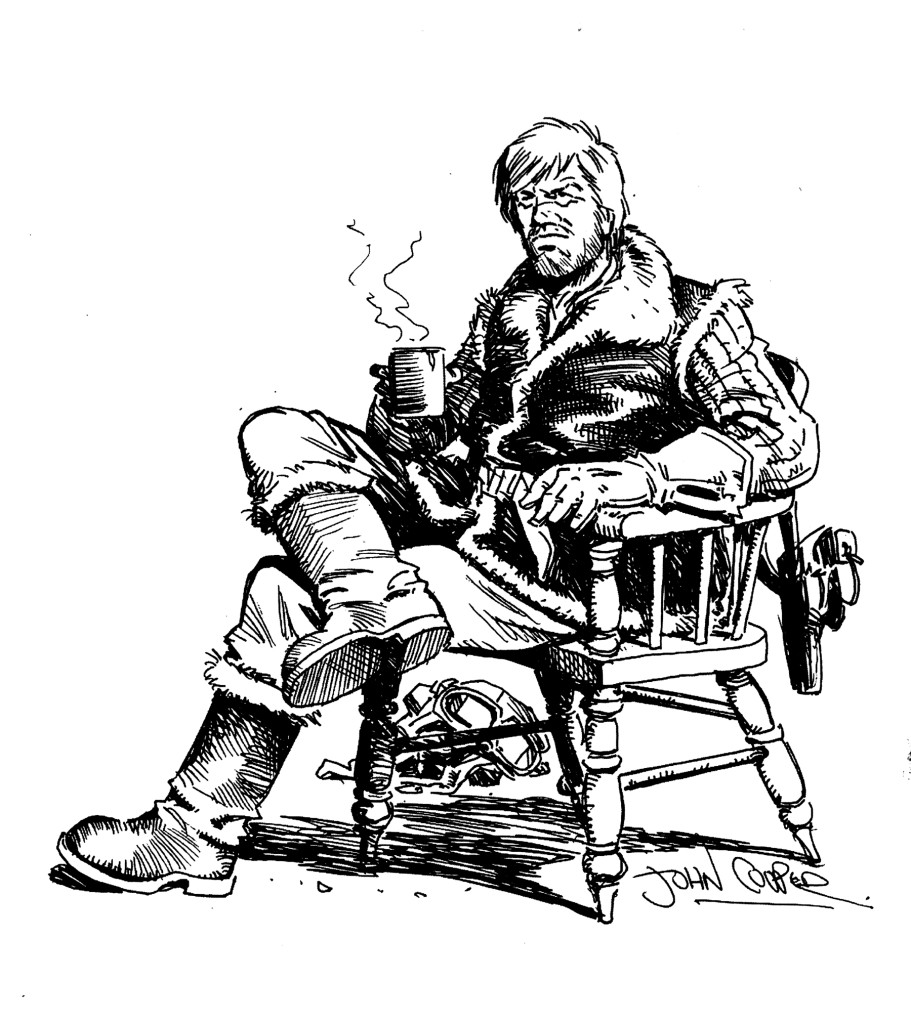 John Cooper’s portrait of Johnny Red, drawn for the a Raptus Festival program.

Although he worked for DC Thomson, drawing for titles as diverse as Bullet and Wendy, and on TV Comic, most of his work in the 1970s was for IPC/Fleetway. He’s perhaps best remembered for the strip “One-Eyed Jack” for Valiant, and, later, Battle when the titles merged; and the World War Two strip “Johnny Red” which he took over from Joe Colquhoun.

“John was arguable the artist most identified with Johnny Red,” notes archivist Moose Harris, who runs the Falcon Squadron site dedicated to the character and has been one of the key figures in ensuring the best representation of some of Battle‘s strips in Titan Books various collections in recent years. “He worked on the strip from 1979 to 1984, producing over 1100 pages of art throughout his 303 episodes in the weekly comic, summer specials and annuals. His run on the strip was later reprinted following Battle‘s merger with the revived Eagle.”

“I really loved drawing ‘Johnny Red’,” John enthused to Terry Hooper. “At one point in the 1970s I was drawing eleven pages a week,including four to five ‘Johnny Reds’.   Some strips got a bit boring now and then, but never ‘Johnny Red’!”

He also drew “Gaunt” and “Dredger” (which he previously drew for Action) and “The General Dies at Dawn”, the latter republished in its entirety in the Titan Books collection Garth Ennis Presents – Battle Classics. 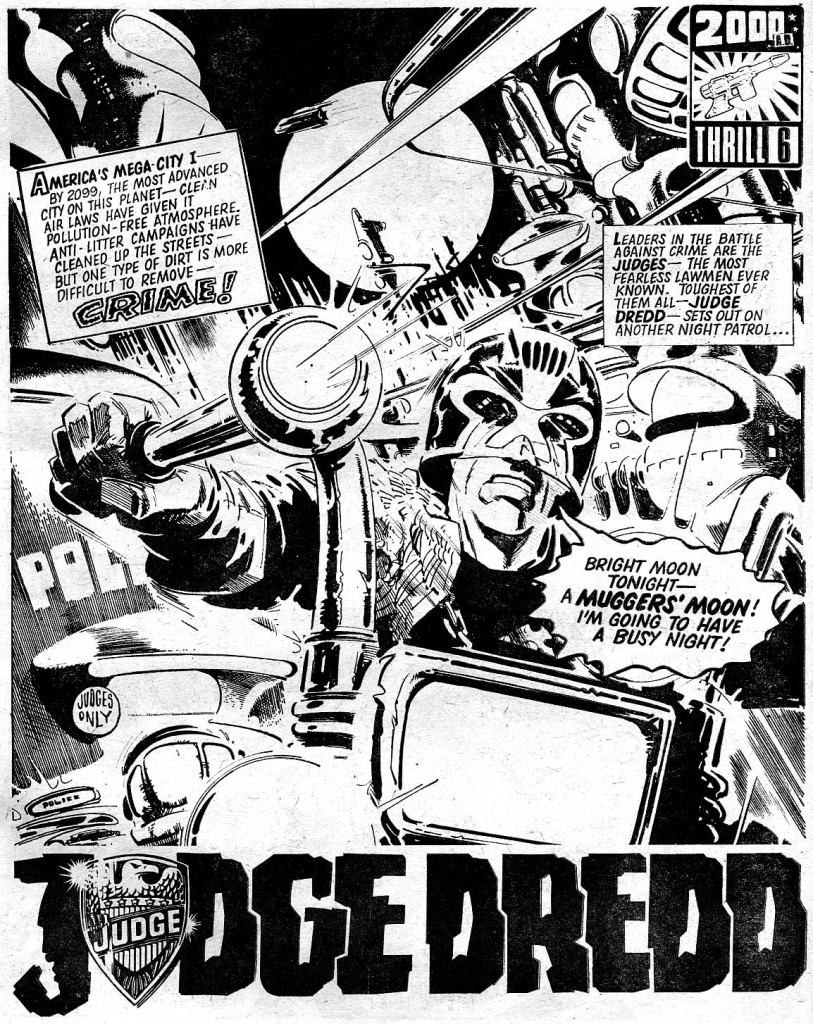 John also worked on 2000AD, drawing the first “Judge Dredd” strip commissioned after Carlos Ezquerra work creating the character, although it was held back until Prog 19. “It was not published until later on because it was thought too violent,” John recalled, noting the character as one of his favourites to draw, “so I ‘tamed it down’.  I went on to draw about twenty Dredd stories.” 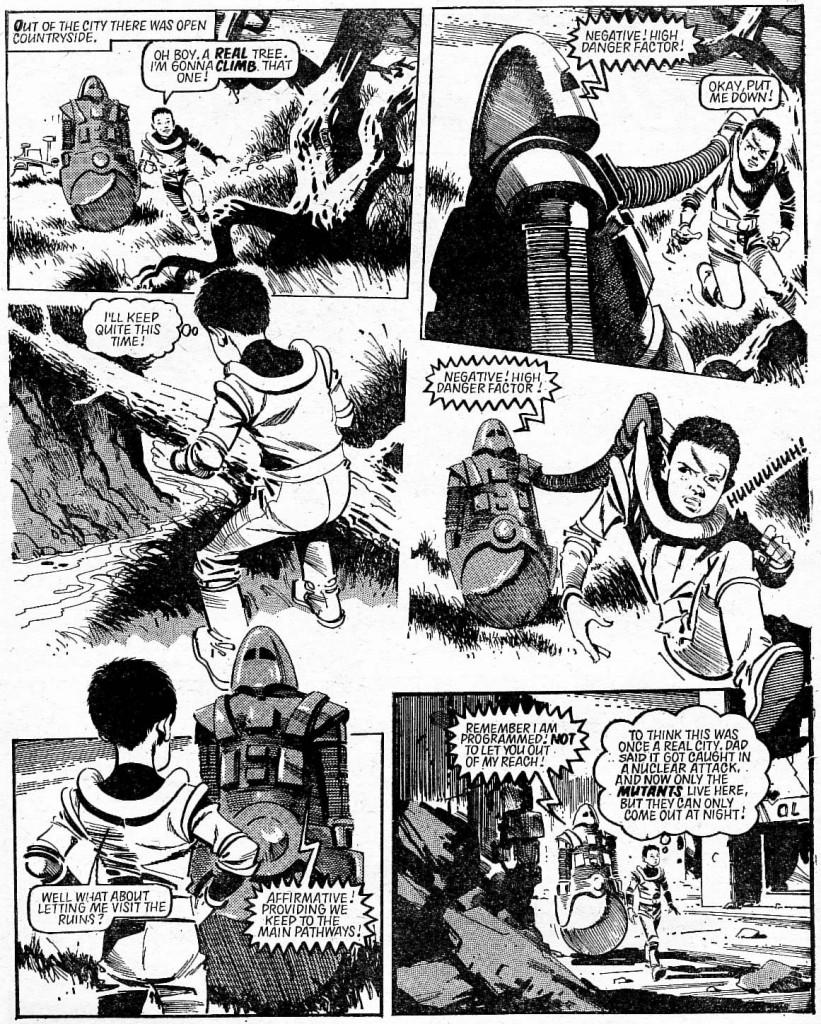 A page from the Tharg Future Shock, “The Guardian”, published in Prog 50.

John also drew “M.A.C.H. 1”, some of Alan Moore’s “Abelard Snazz” strips and numerous one-offs, including “The Guardian”, in Prog 50, described on Twitter by artist Chris Weston, paying tribute to John, as ” the best Future Shock ever.” He made a return to the world of Dredd in 2008 to draw “Armitage” for Issues 266 and 267 of Judge Dredd Megazine.

For the 2000AD “stable mate” titles, he drew “Timequake” for Starlord, and “The Lawless Touch” for Tornado.

In the 1980s, John worked for Marvel UK on Blake’s 7, “Trakker”, Doctor Who and Biker Mice from Mars  in 1981-95, and many strips for ITV’s Junior TV Times title, Look-In, drawing The Fall Guy,  the fondly remembered Wurzel Gummidge, CHiPs, Murphy’s Mob, Streethawk, Knight Rider, The A-Team and Airwolf in 1981-87.

He was a major contributor to the revived Eagle titles, drawing strips such as  “The Amstor Computer” and “Computer Warrior” and “Mask and Venom” , with much of his older work reprinted in the comic in its later years.

He turned his hand to football strips in the 1990s, drawing “Goalmouth” for Roy of the Rovers, Striker for The Sun newspaper, and satirical football strips, usually called “Roy of the (something topical)s”, for Private Eye.

“John drew Striker for me in the mid-to-late nineties and was always so dependable – and quick!” recalls Striker‘s creator Pete Nash. “There were times when I’d send him a script and the finished product would be done within three or four hours!

“As well as being a very talented comic artist he was also an accomplished painter who loved to paint harbour scenes from around his home town of Bridlington and received many commissions.” 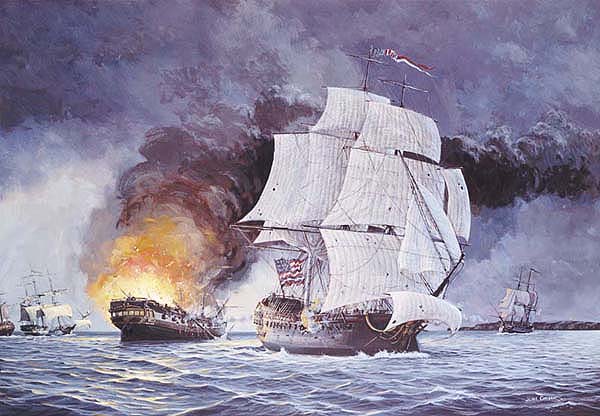 John’s painting of the USS Bonhomme Richard, commanded by John Paul Jones at The Battle of Flamborough Head

Although family matters and, later his own battle with emphysema saw him move away from comics in his later years, he worked for clients such as Channel 4 News providing occasional comic strip interpretations of news events and spent some time as a court room artist.

“I particularly remember his cheery, enthusiastic voice,” Pete Nash recalls. “Nothing was ever too much trouble for him, even when scripts arrived later than he would have liked. A top artist and a top gentleman who will be sadly missed.”

Sadly, John will also miss both the revival of the Battle character with whom he is most associated – Johnny Red – and a collection of the first of the character’s stories he worked on for the comic, to be published later this year by Titan Books.

Garth Ennis, a longtime fan of “Johnny Red”, who is writing Titan’s revival comic, has kindly given us this tribute to John.

“I never actually met John, just spoke to him on the phone, but that’s only one of the regrets I have about his passing,” he says. “He won’t get to see the forthcoming Johnny Red Volume IV, which will begin the collection of his run on the series. He won’t see the new Johnny Red story I’ve been working on with Keith Burns, either. I genuinely thought he’d get a kick out of both, and I think that represents my greatest regret of all: I worry that there’s a sizable number of British comics artists and writers who go to their graves without fully realising what a huge difference their work made to readers, and even worse, lacking due recognition for the incredible material they created. Joe Colquhoun, Mike Western, Tom Tully, Phil Gascoine, Geoff Campion, and now John Cooper.

“A good number of the guys who worked on 2000AD in its classic period, particularly those who made the leap to American comics, are rightly respected and remembered for what they did. But too many from other British titles fade into obscurity, fondly remembered only by a few aficionados. In John’s case I think that would be a great shame: his work combined energy, humour and characterisation with an admirable facility for portraying sudden, violent action that I still find utterly breathtaking. Like many of the true greats he made it all look so very easy, when of course it isn’t at all. John’s work on Johnny Red was a huge part of my comics-reading childhood; I recall his art on the strip just as fondly as I do Mike McMahon on Judge Dredd, Dave Gibbons on Dan Dare, or Ian Gibson on Robo-Hunter.

“Take a look at Moose Harris’ superb Falcon Squadron site and you’ll see what so many of us loved about John drawing Johnny Red. Read the Flying Gun saga in 1979, or the magnificently bizarre Ghost Fighter story a year later, or the attack on the Porcupine Bridge in late ’81. You’ll see Johnny Redburn very human one minute and impressively savage the next, formations of fighters wading into one another like scattering birds, exhausted pilots trudging away from their bullet-riddled craft through ghostly winter twilight. You’ll see that Hurricane, one of the strips’ great constants, soaking up ridiculous amounts of lead as its pilot does his best to fly it through an inferno. You’ll see art that matches perfectly the action, tragedy and occasionally demented glee of the scripts: well, that’s John Cooper, making it all look easy.

“There are plans afoot to collect a goodly chunk of John’s run on the strip, as well as a number of other stories in the Battle Classics series. This is still quite tentative and will certainly take some time, but will I think be a fitting tribute to a generation of British creators who gave their readership so much enjoyment, and who deserve so much more than to be simply forgotten. I’m delighted that John’s superb work on ‘The General Dies At Dawn’ is now back in print, but there’s plenty more by him and by others that ought to be rescued from limbo. It seems to me the least we can do.

“My condolences to John’s wife and family, and my thanks to one of the very, very best.”

I’d like to echo Pete and John’s tribute to a fine man. John will be much missed and the world of British comics is a lot smaller for the loss of another of its greats.

As fellow Eagle artist David Pugh noted of John’s death yesterday, “It is a pity that so many artists worked in anonymity in Britain, unlike America. So many children would have enjoyed John’s work and will never hear of his passing.” 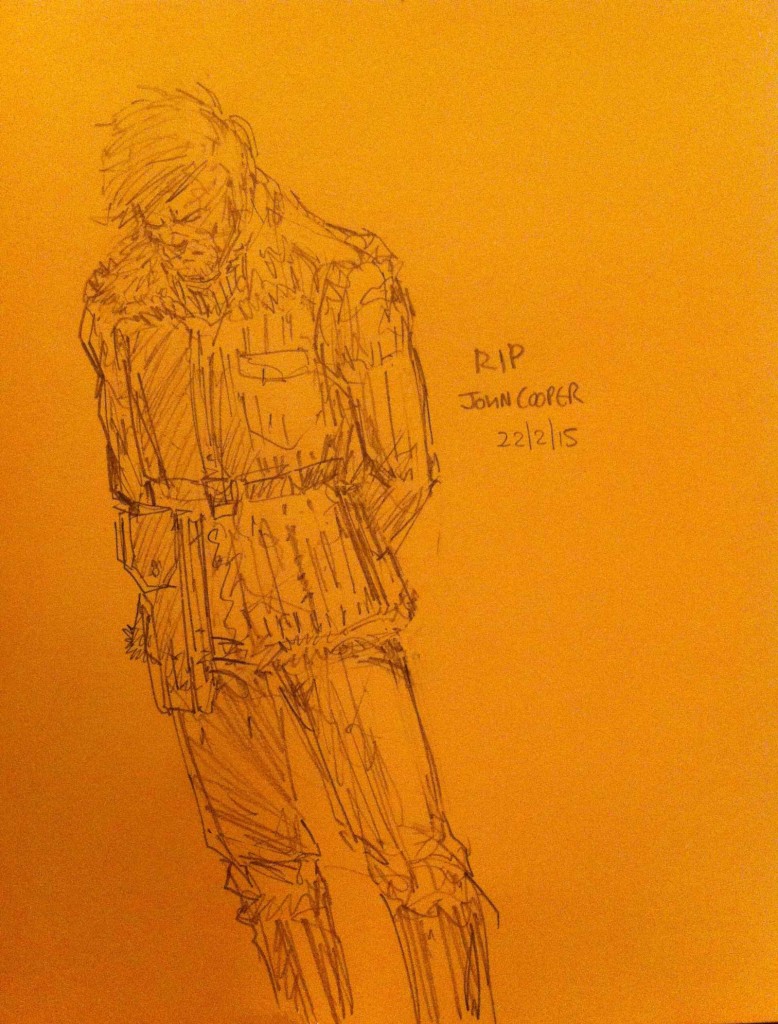 • Bridlington Free Press: Brid’s comic king passes away
John Coper’s hometown newspaper paid tribute to John in its 13th March 2015 edition, covering not only his comics work but his support for the RNLI