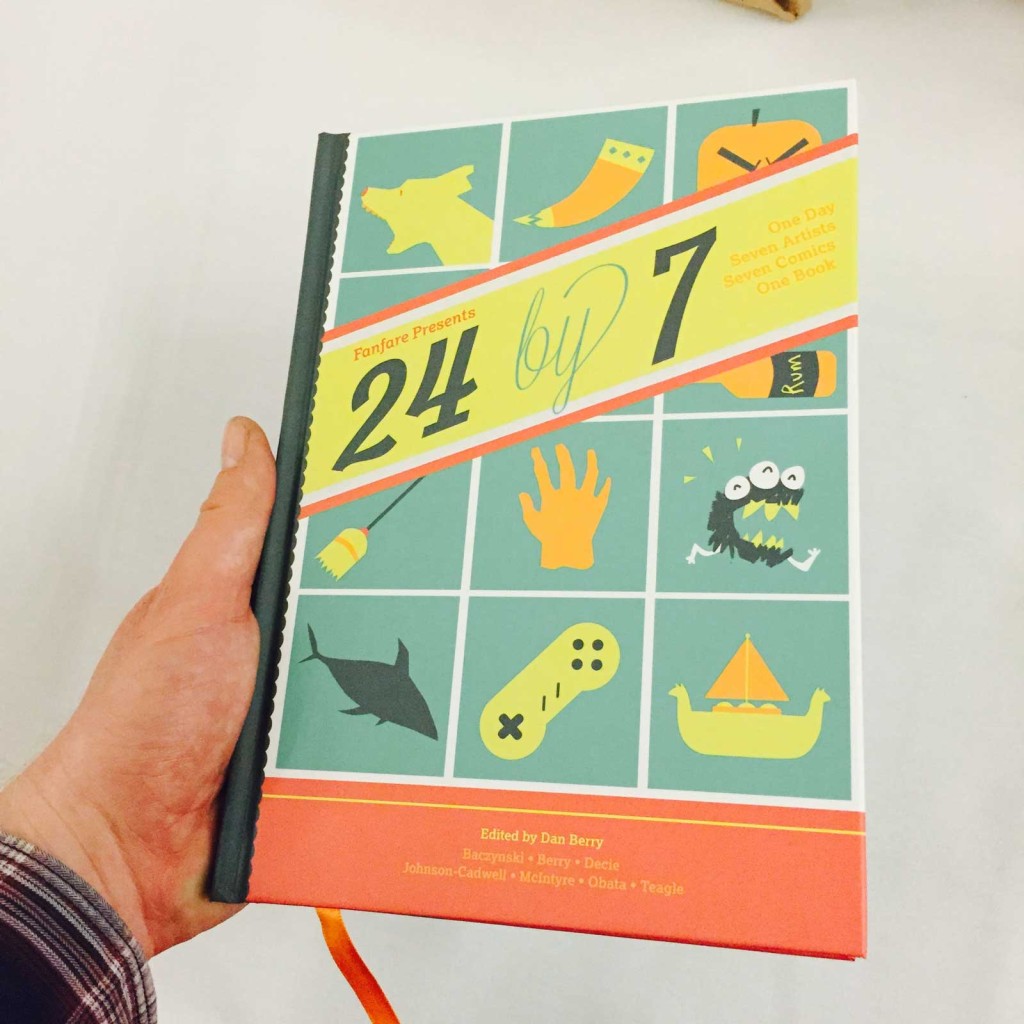 The Book: At 3.00pm on Thursday, 16th October 2014 in the small British market town of Kendal on the edge of the Lake District National Park, seven artists entered a room and started to draw. By 9.00pm the following day, seven comic books were being collected from the printer to form part of the Lakes International Comics Art Festival taking place throughout the town that weekend.

The inventor of the 24 hour comic marathon, creator and commentator Scott McCloud (Understanding Comics, The Sculptor), was in attendance as was Festival patron Bryan Talbot (Tale of One Bad Rat, Grandville) and other show guests.

The artists worked around the clock on coffee and smiles to produce “a spread of seven comics as diverse as they are witty as they are beautiful to behold”. From witches to scribbles, paperclips to salty tales, hand-me-downs to chance encounters and doomed love, all drawn in 24 hours by quality artists (in order of appearance) Sarah McIntyre, Joe Decie, Kristyna Baczynski, Fumio Obata, Jack Teagle, Warwick Johnson-Cadwell and, finally, curator and editor Dan Berry.

Scott said of the event: “My favourite memory of the supremely memorable Lakes Festival was the intrepid band of 24-Hour comics heroes, toiling round the clock in the business centre of our hotel. Their fantastic work was the true heart of the festival for me.”

Fanfare and Lancaster-based book publisher and distributorGazelle part sponsored the event at the show and have now collected these seven stories and present them in a beautiful hardcover anthology, complete with a 16-page gallery of photos by Katie White of the day. 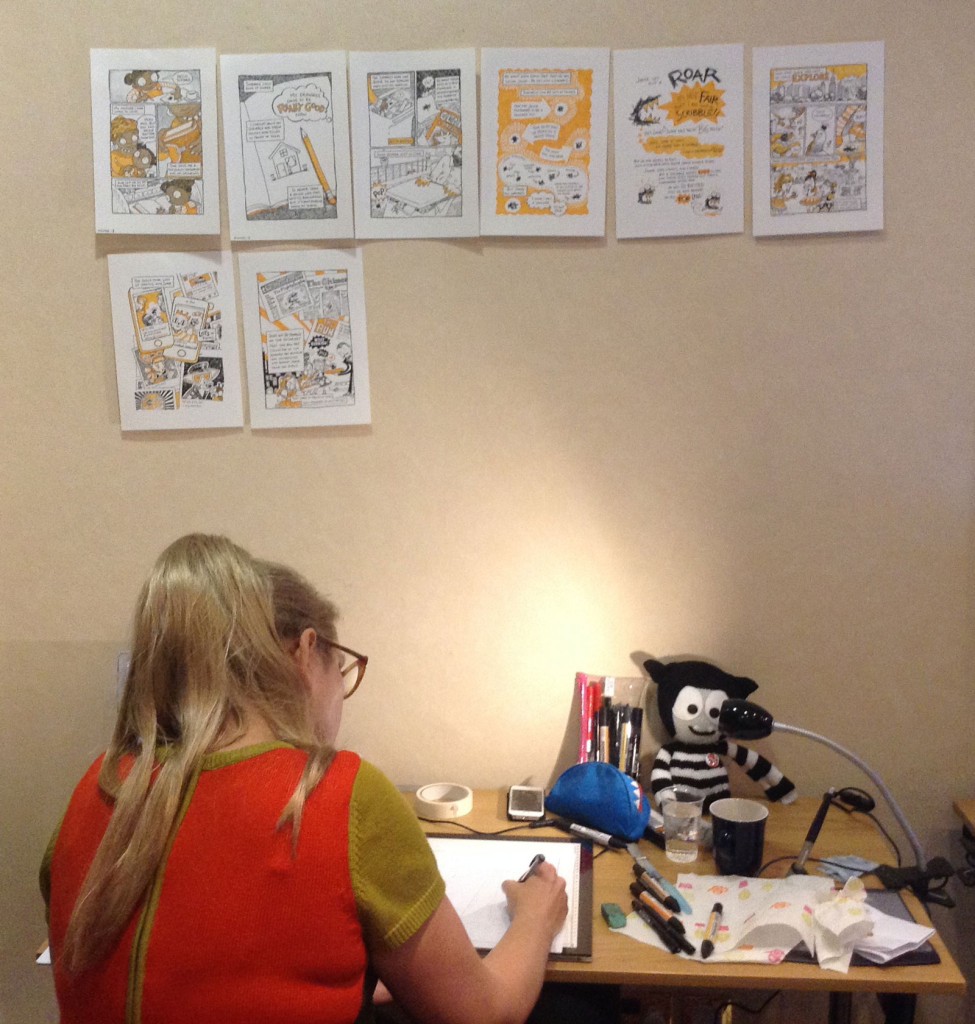 The Review: One of the things that makes the Lakes International Comic Art Festival distinct from other British comics events are its numerous comic publishing initiatives, promoting both established as well as up and coming creators beyond what some might see as the confines of the comics community. The work they’ve released so far, working with Manchester-based Oliver East, has gained a lot of deserved praise, and the seven 24 Hour comics, drawn and printed over last year’s festival weekend were equally enthused about, by creators and readers alike.

That said, the print runs for the comics was of necessity quite small and the cover price quite high as a result. Although some of the creators have published those 24 Hour comics on their respective web sites, an easily obtainable collection of all seven strips wasn’t part of the original plan for the project.

Enter Fanfare Press, aka Fanfare / Ponent Mon, a working liaison between two people with one aim – to bring quality storytelling in the comic medium from wherever it is found to everywhere it should be. Formed in 2003 they first focused on the French and Japanese alternative scene through Frédéric Boilet’s “Nouvelle Manga” movement, but have since widened their scope and geography with the newer titles. With twelve Eisner and a two Ignatz nominations in the past few years plus a list of press reviews to die for, their choice of titles is virtually peerless. 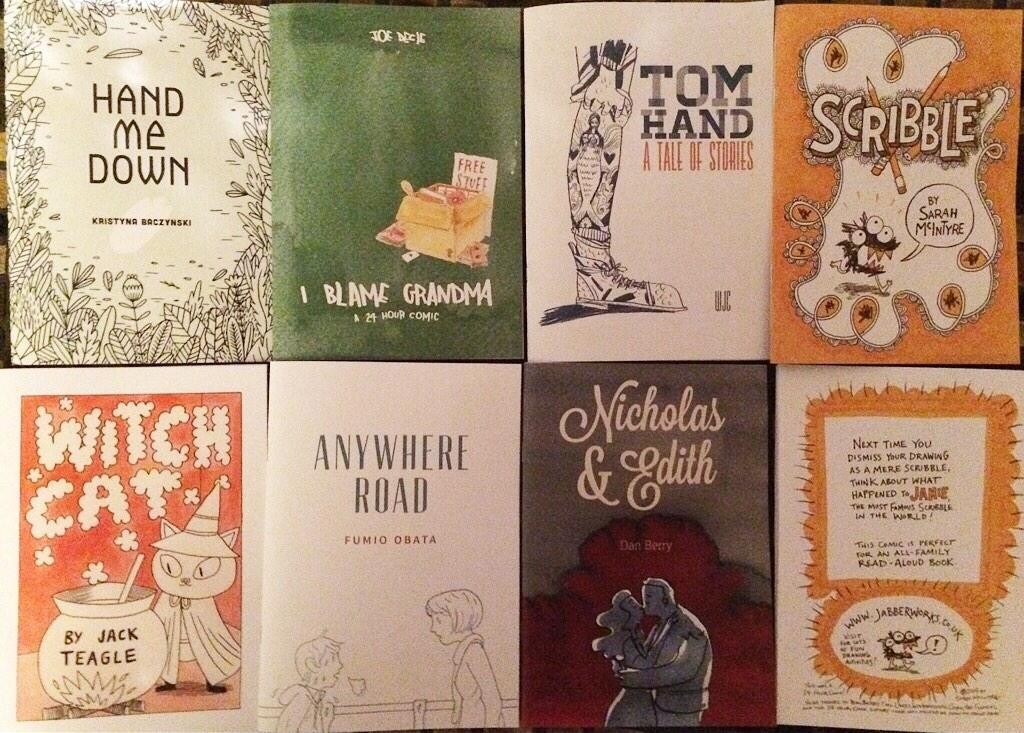 All seven of the 2014 LICAF 24-Hour Comic Marathon comics! (The eighth is the back cover of “Scribble” by Sarah McIntyre). Photo: Sarah McIntyre

As you can imagine, with that kind of pedigree, their interest in publishing a collection of the much-praised comics was very much welcomed by the LICAF team– and, hopefully, you’ll be equally keen to grab a copy of this first “Lakes” comic hardback. The quality extends beyond the strips into the book’s production values, even including a ribbon bookmark for a mere £14,99 that not only makes it a great read but also a wonderful way to introduce your cat to comics, as I discovered last night while trying to read the book. 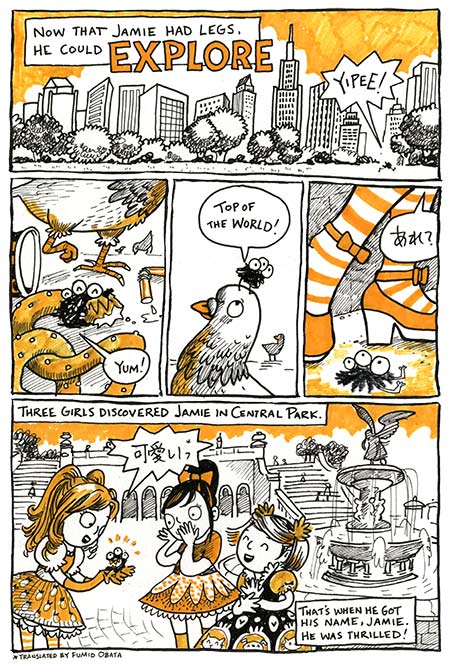 A scribble escapes from a drawing and rises to fame in Sarah McIntyre’s tale for 24 x 7.

As you’d expect from such a diverse range of talent, this collection has some equally diverse tales, some planned out in detail before the actual drawing began, others less so. It’s a little difficult to talk too much about such short stories without revealing some spoilers, but for your hard-earned cash you’ll get, in order of publication,  Sarah McIntyre’s “Scribble” – hilarious silliness about living, er scribbles; Joe Decie’s “I Blame Grandma” – which until its final page had me about to Google the origins of paper clips; Kristina Bacynski’s marvellous “Hand Me Down” – a beautiful wordless and poignant story spanning millennia; Fumio Obata’s edgy relationship-driven tale “Anywhere Road”; Jack Teagle’s “Witch Cat”,  a very silly story in which we also meet a Bananasaurus with strange powers; Warwick Johnson-Cadwell’s “Tom Hand” – offering some highly fishy stories about a sea-faring gentleman or ill repute; and, finally, Dan Berry’s “Nicholas and Edith”, a beautifully told but tragic love story. 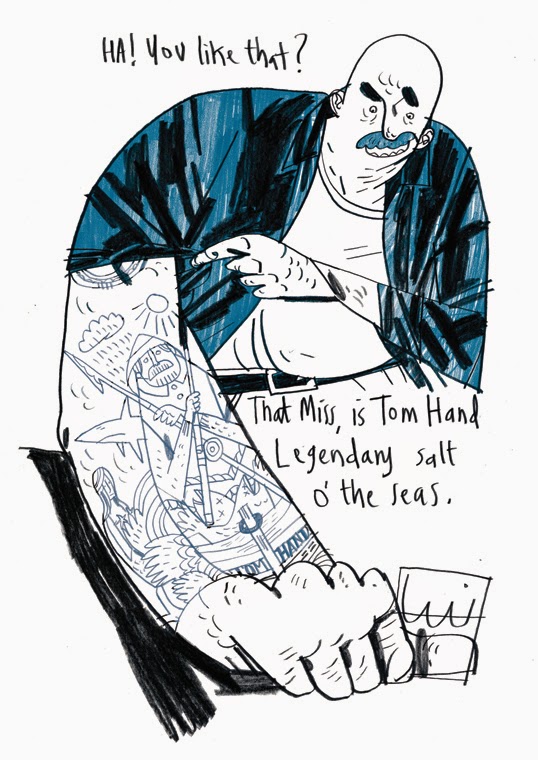 A page from “Tom Hand” by Warwick Johnson-Cadwell

The range of art is, as I said, varied, and, as I always say about any anthology, each reader will have their own favourites but the quality of all seven featured makes it impossible for me to pick any single one over the other (I tried, but each are stand outs for different reasons and will resonate depending on your mood when reading).

Even with the pre-planning that went into these strips (joyously described as “cheating” by Dan Berry in his foreword), the speed at which these seven high quality tales were produced was simply astonishing, especially when you consider that Joe Decie, for example, freely admits that it normally takes him about eight hours to draw a comics page (“if you include all the procrastination and mucking about on Twitter”).

If you’re the kind of comics reader who likes to sample new creators work, then 24 x 7, like anthologies such as Nelson, provides a perfect opportunity to enjoy creators you may not be familiar with, and enjoy some smashing storytelling to boot. Track this down.

• 24 x 7 is being sold by the book’s individual creators at comics events and will be on sale at Lancaster Comics Day on Sunday 14th June. The creators for the 24 Hour Marathon at the Lakes International Comic Art Festival 2015 will be announced next month.

• 24 Hour Comic Day happens every year and will take place in 2015 from 12 noon on Saturday 4th October and 12 noon on Sunday 5th October. Creators of all ages will be given the opportunity to create a 24 page comic. Check out www.24hourcomicsday.com, the Facebook page or follow 24 Hour Comic Day on Twitter @24hcd

• If you want to know how to approach creating your own, then 24 x 7 editor and Marathon co-ordinator Dan Berry has this very handy guidance here on his web site