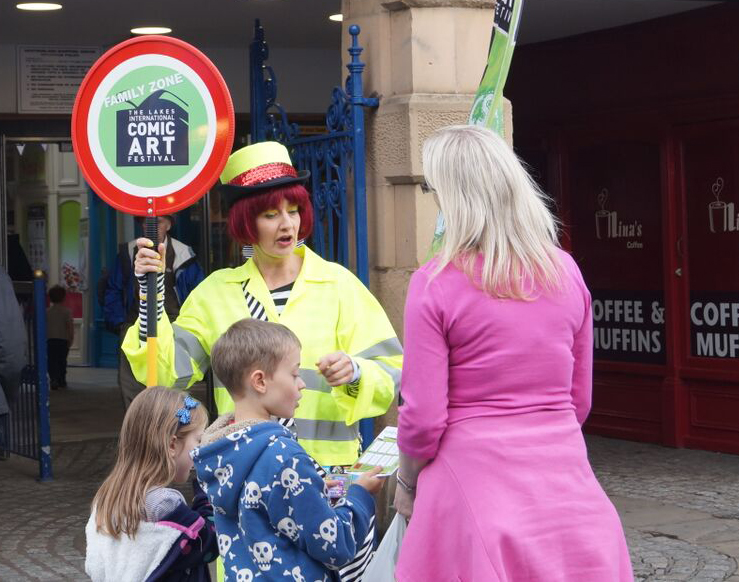 Children (of all ages) will find the amazing world of comics to discover and explore at the Family Zone, part of this year’s Lakes International Comic Art Festival  (Saturday 17th – Sunday 18th October 2015).

Special events and workshops will offer a thrilling journey into the world of comics over the weekend. Race through the snows of the frozen north, stop off in Japan for a etaanga makeover, then jump aboard the hyperspace railway! Along the way you can meet and work with professional comic creators, develop art and story telling skills, discover new artists and comics and have loads of fun!

“The Lakes Festival’s Family Zone is for kids and their parents,” explains Family Zone producer Angela Diggle. “This year, it’s taking place across three venues (the Westmorland Shopping Centre, Kendal Library and the Brewery Arts Centre) and we have workshops, presentations, comic jams, storytelling, comic-making, crafting, games, a special trail and much more…

“Our aim is to encourage kids to engage with comics as readers and creators, introducing them to the incredible range of comics that are out there while helping them develop their own creative talents. 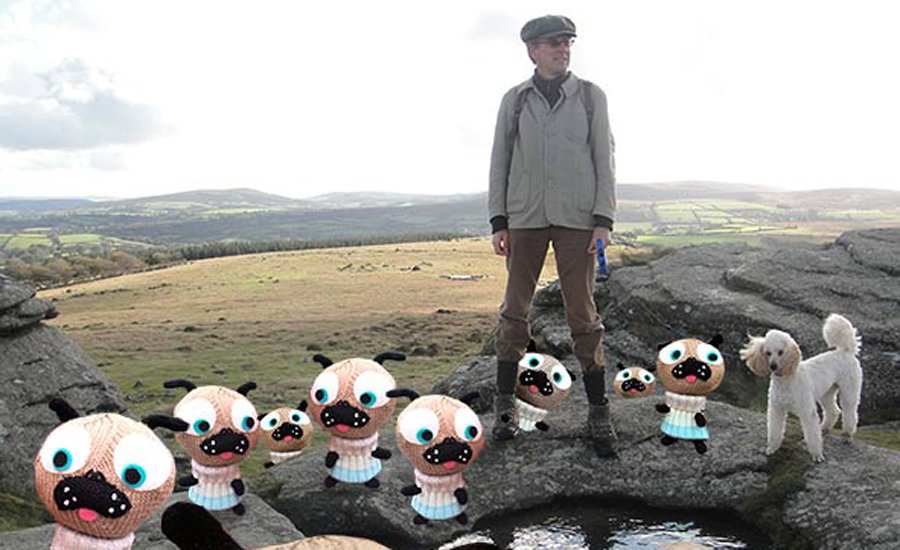 At the Lakes this year: Author/illustrator Philip Reeve (creator of Mortal Engines) .

The Family Zone –  a major part of the Festival programme, which has proved hugely popular in previous years – is an incredible opportunity for kids to meet and work with a wide range of award-winning and supremely talented professional artists and writers such as: author/illustrator Philip Reeve (creator of Mortal Engines) whose new novel Railhead is soon to be a major Hollywood movie; the flamboyantly fabulous writer/illustrator Sarah McIntyre (Vern and Lettuce, Jampires); Laura Howell, trailblazing her way as the first female artist ever to work for The Beano; all the way from Springfield, The Simpsons artist Bill Morrison; inspirational concept artist Ian McQue (Grand Theft Auto); critically acclaimed duo Metaphrog (Louis); and rising star Zoom Rockman (Skanky Pigeon).

A firm festival friend, The Phoenix comic is back in Kendal this year. The highly-acclaimed weekly children’s comics workshops are always a huge hit and this year will be no exception, with two of the best artists and storytellers in the UK, Neill Cameron (Mega Robo Bros) and Laura Anderson (Evil Emperor Penguin). With workshops containing pirates, dinosaurs, robots, disco pigs, cakes and general comic awesomeness you can’t go wrong! 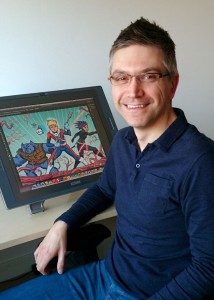 Drop-in workshops include last year’s mega hit We Draw U Draw, where you can sit with a professional comic artist and have them draw your favourite comic character – as long as you draw something for them in return. With Robert Deas (Troy Trailblazer), Paul Harrison-Davies (Boo!, Astro Dog) and numerous artists from across the festival!

Comic artist Sally Kindberg will show you how to draw cheeky animals including dinosaurs and the mysterious Lakeland Tizzie Wizzie. The Felt Mistress, aka Louise Evans, will show you how to make finger puppets of Poblin and the rest of the Lakes Gang and Jonathan Edwards (illustrator, comic artist and of course the designer of Poblin and The Lakes Gang) will be doing monster portraits.

There will also be a special comic jam session, Poblin’s Bedtime Comic Jam, where you can join professional artists to help create a giant comic art quilt for Poblin! When everyone is tucked up in bed on Saturday night the Premier Inn elves will stitch all the panels together to auction for charity on Sunday.

“For the first time this year we have exhibitor tables aimed firmly at the family market,” says Angela, “with guests including Joe Matthews, publisher of Funny Monsters Comic, Nigel Parkinson and Nika from The Beano, who will be demonstrating how to draw Dennis The Menace and company; extraordinary emerging talents Jordan Vigay (Red Crow) and Jonathan Holmes (Crystal Orb), the Print Wagon, and temporary superhero tattoos by Jack Knight.

“We also have mini-Harajuku makeovers from festival face-painting favourites, the irrepressible Bunny and Chip!

“The theme of the Family Zone this year is ‘Discover and Explore”” she reveals, “and we’re aiming to be accessible to everyone, from avid fans and aficionados to those who have never picked up a comic in their life. So we’ll have recommended reads and talks to get people enthused about comics in general or perhaps new artists and writers they’ve never heard of. Dr Mel Gibson will share some of the best graphic novels and comics for young people and their families and, if you wish really hard, perhaps our very own Fairy Geekmother who will turn up, just like magic, to find just the book for you!”

• For the latest news on the 2015 Lakes International Comic Art Festival visit: www.comicartfestival.com

• Sign up for the Festival’s newsletter here for the latest news! 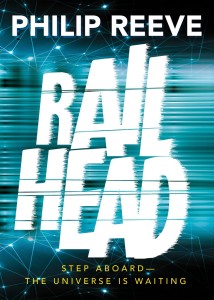 Philip Reeve’s new novel Railhead – out in October from Oxford University Press – is a story of thieves and androids, exiles and emperors, insects and intelligent trains, and takes place in a far future society linked by a hyperspace railway. In this session Philip and Ian McQue will talk about creating worlds through words and pictures, and Ian will create some images based on readings from Railhead.

RAWR!!! What happens when a hungry T-Rex goes on the rampage in the pizza factory? Can Dinoville’s police force bring this rascal to justice? Join picture book writer and illustrator Sarah McIntyre for a wild and interactive dinosaur story time! Learn how to draw your own cartoon dinosaur so you can go away and make your own stories and comics!

Comics and Fairy Tales with Metaphrog

Join the mighty Metaphrog on a journey through comics and fairy tales! Find out all about their brilliant new graphic novel launching at the festival: The Red Shoes and Other Tales, adapting the Hans Christian Andersen classic. Learn how to make your own comics! Create your own characters! 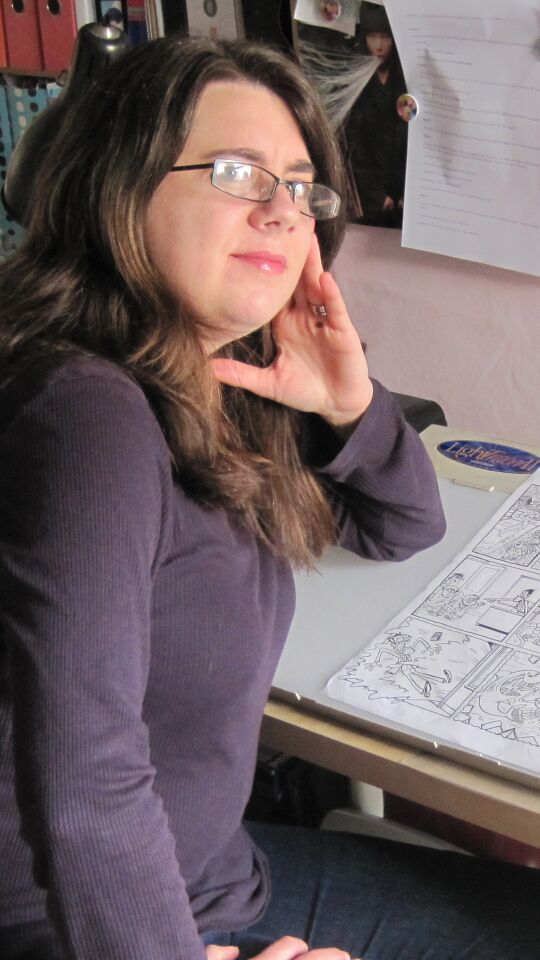 Learn the basics of creating a comic page with The Beano‘s Laura Howell. Starting with simple shape-based drawings and building up your skills as the hour goes on, you’ll soon be creating your own characters and seeing your story ideas come to life on the page in front of you. You’ll also get a behind-the-scenes look at how real comic pages are created, as well as discovering the surprisingly simple secrets to drawing famous cartoon characters. 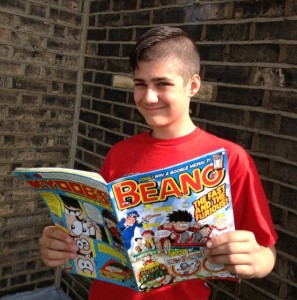 Fire Skanky Burgers using Zoom’s Skanky Burger Catapult and have a go at winning yourself an Unhappy meal! Then take a seat at the Takeaway Table to think up and draw your own funny comic characters. Zoom will also be running workshops where you’ll learn how to create a comic strip starring Skanky Pigeon from The Beano!

Join Stephen White (The Beano, The Dandy, The Broons, Oor Wullie), aka Stref, for an exhilarating hour of storytelling and live drawing as we journey to Neverland and look at the elements that go into writing and illustrating a thrilling fairy story crammed with heroes, villains and magic.

Fans of the anarchic animated adventures of The Simpsons will be able to enjoy a stroll through Springfield with award-winning Simpsons Comics artist Bill Morrison as he sketches and signs comics.

Join writer/illustrator double-act Reeve & McIntyre on a magical journey to the Frozen North, in the company of brave sled-racers, noodle-eating yetis and sixty six pugs. Learn how to draw your own cartoon, find out how to defeat a hungry Kraken, and discover the secrets of the Fifty Different Kinds of Snow.

‹ Birmingham Comics Festival – back by popular demand in 2016
Lancaster Comics Day 2015: A Grand Day Out ›