In Review: It’s Ghastly, the untimely demise of “Scream!” (Not for the nervous…) 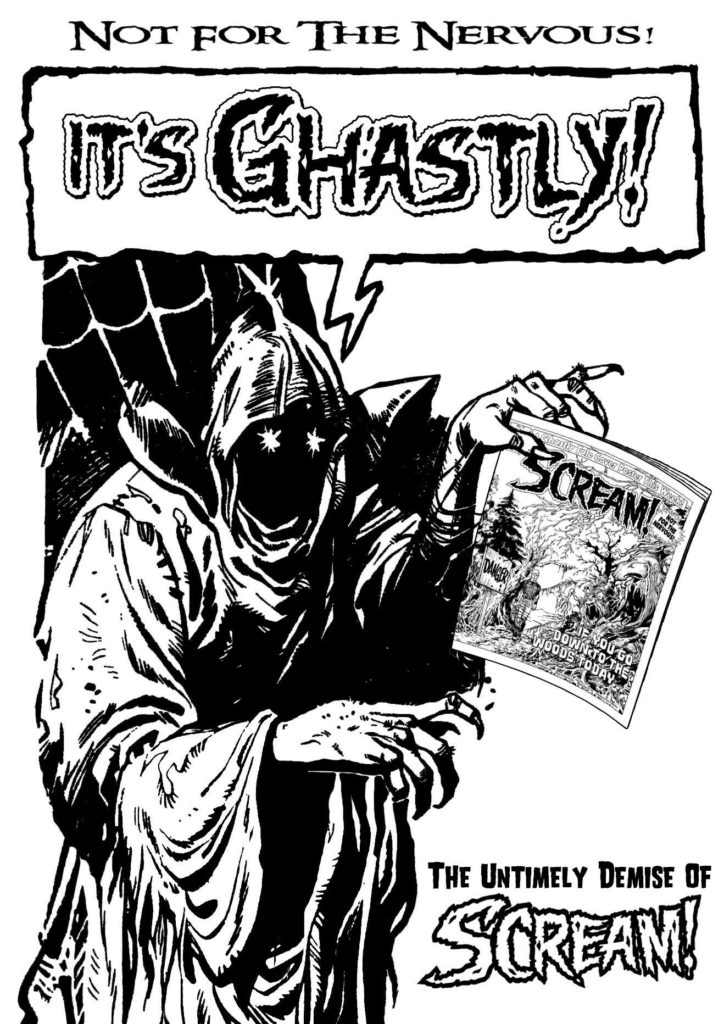 Greetings mortals! Don’t expect an objective review of It’s Ghastly, the new Comic Archive from Hibernia Comics (their third), because I’ve been waiting for this publication for over 30 years.

I was absolutely the right age to be into Fleetway Editions short-lived weekly horror comic, Scream!, when it first came out and I devoured each issue with eager anticipation. When it ceased to appear on news-stands after only 15 issues, with no explanation I was hugely disappointed. Whilst the subsequent holiday specials and continuation of two of Scream!’s most popular stories in Eagle and Scream!, did help a little, Scream! has always felt like unfinished business. What would that 16th issue had been like? What horrors would it have contained?

Somewhere out there, there’s an alternative universe where Scream! ran for years and years, but in this universe we’ve always had to wonder about what might have been. Now, with the publication of It’s Ghastly! from the ever-reliable Hibernia, it’s time for us to find out!

But first, let’s get you in the mood, thanks to this tribute from M Starlored…

Two things about It’s Ghastly! strike me as being rather remarkable. Firstly, just how much unseen Scream! material the publishers have been able to assemble. When you consider that most of the Scream! ‘leftovers’ were used in the subsequent holiday specials, it’s incredible that Hibernia have been able to find even more.

The main highlights for me are the various recreations of the Scream! covers that we never got to see – and they are frankly rather astonishing. To me and other Scream! fans, they are the comics equivalent of finding a previously lost episode of Doctor Who or The Avengers. The story of how these covers were re-assembled is really quite amazing. 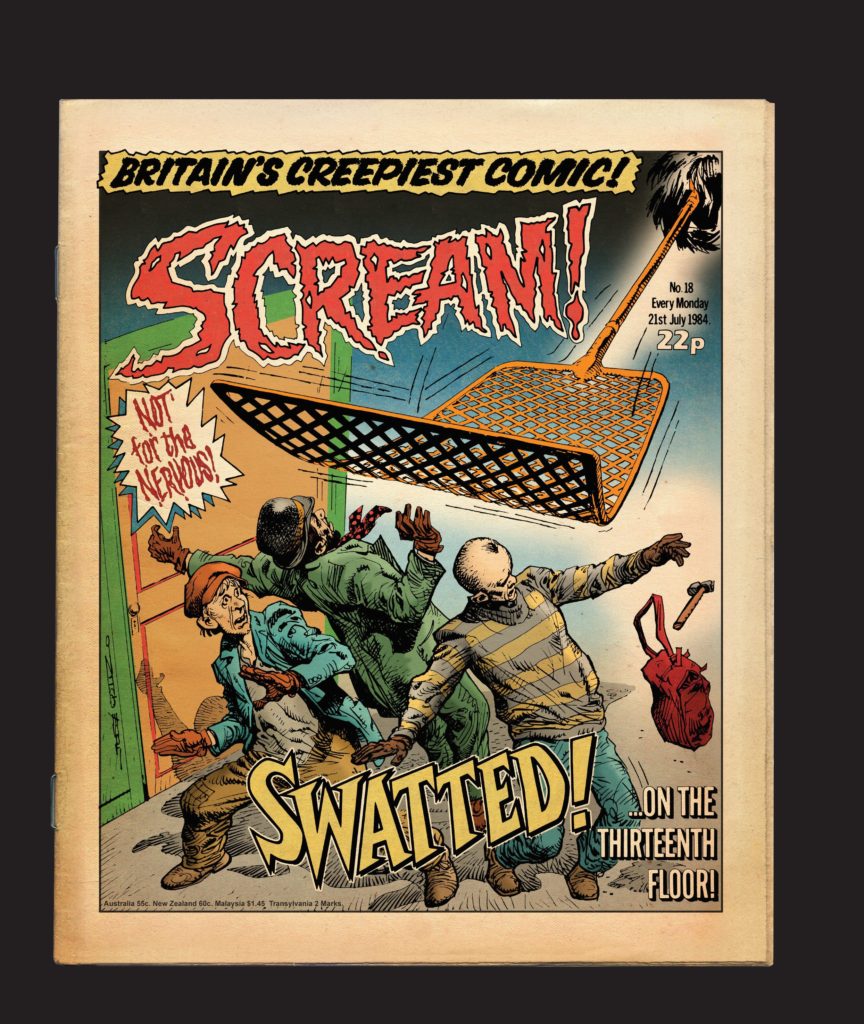 One of Michael Carroll’s “Might Have Been” Scream! covers

The second thing It’s Ghastly! highlights is that it’s frankly astonishing that even 15 issues of Scream! got produced, when you consider just how many people needed to ‘OK’ the material before it went to press. Here, you’ll read about the hoops that the Scream! editorial team had to jump through to get the publication out on the news-stands.

You can kind of appreciate where the executives were coming from – there’d have been plenty of people happy to hang the publishers out to dry if there had been masses of parental complaints about the comic’s content. This was, after all, only a short time after TVAM had criticised violence in the Eagle comic. But even so, it left the editorial team in a virtually impossible position when it came to the practicalities of actually putting a weekly comic together. As a monthly, it might have had more of a chance. 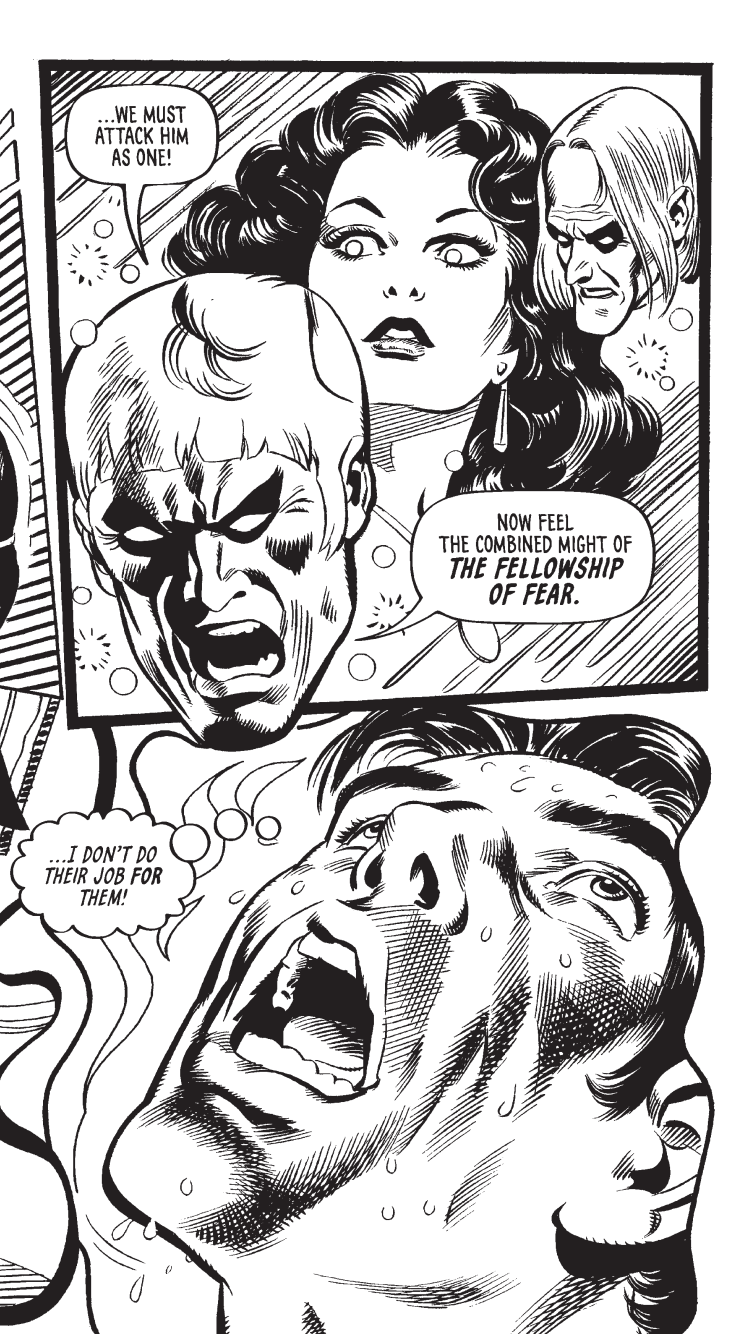 Panels from the re-discovered episode of “The Nightcomers” featured in Hiberna’s third Scream-dedicated Comic Archive. Script by Simon Furman, art by José Gonzales

In addition to the unpublished covers, we also have unseen episodes of “The Nightcomers“, details of stories that never were and the recollections of some of the main players responsible for creating Scream! – Barrie Tomlinson, Ian Rimmer and Simon Furman.

It’s clear the material was put together a while ago as Fleetway executive Gil Page, who is the subject of a mini-interview, has since sadly passed away and the Rebellion Monster collection, the work of, initially, Alan Moore but more down to John Wagner and the artists involved on the strip, is referred to as though it is yet to be published. But this is a minor quibble and I know that the Hibernia team have worked very hard to make this publication a reality.

Is there any more Scream! material left for comic historians to find? Well, there’s the infamous Scream! TV commercial (which did happen because I saw it, but unlike many 2000AD promotions, seems to have so far escaped YouTube’s collective hive mind) and surely there must be a record somewhere of which marketing company was responsible for making it. Until then, this superb publication is more than enough to keep me going.

Ten tombstones out of ten for this superb publication which is possibly the best thing I’ll ever read.

And if you want to grab my copy off me, you’re going to have to wrestle it from my cold, dead hands…

• It’s Ghastly, the untimely demise of Scream! is available now from www.comicsy.co.uk/hibernia | 64 pages (10 in colour)