From 1940s Hollywood occult to kicking Tolkien – 2000AD’s Christmas special is out next week! 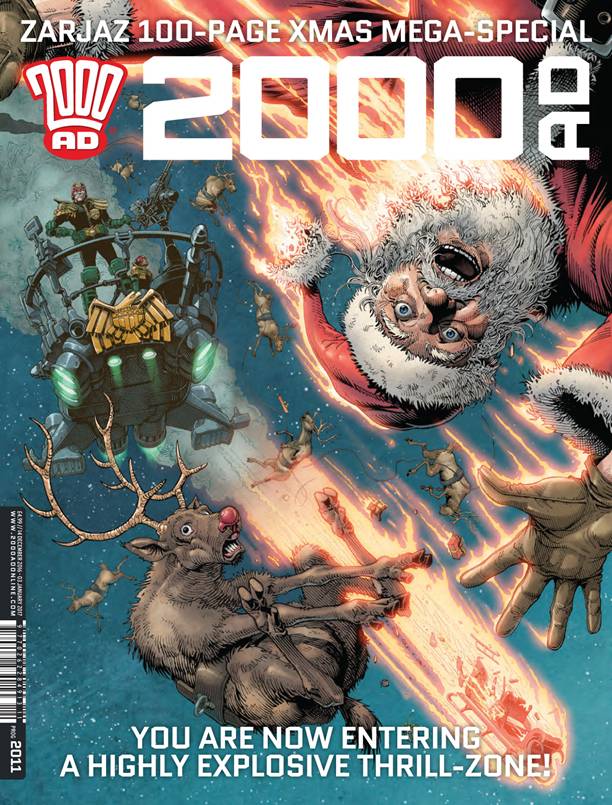 Once upon a time, 2000AD annuals would languish beneath the Christmas tree until the big day, creating an agonising delay before readers could tuck into the Thrill-powered delights inside…

But these days, publishers Rebellion don’t force readers to wait until 25th December to unwrap their presents – the 2000AD Christmas Special is out next week!

2000AD Prog 2011 sees the return of Chris Weston (The Invisibles) to “Judge Dredd” and a brand new cover by veteran artist Cliff Robinson, plus everything from everyone behaving themselves in Mega-City One (briefly) to giant trans-dimensional worms and the continued rise of the Dark Judges!

We’ll have a review for you on day of release, but we can reveal this bumper 100-page issue is a veritable festive selection box of Thrill-powered treats, including traditional staples like “Judge Dredd’ and “Ace Trucking Co.” alongside new favourites such as “Aquila”, “Kingdom”, “The Order” and “The Fall of Deadworld”.

In noir magical thriller “Hope” by writer Guy Adams (Goldtiger), artist Jimmy Broxton (Knight and Squire) and letterer Simon Bowland (James Bond), it’s a 1940s Hollywood where victory in World War Two was achieved by occult means. Magic is now a part of daily life, but the costs can be high – especially for Mallory Hope, a magician and private investigator who only wants to find his wife and son.

And, last but not least, there’s a history of the 1980s’ ‘horror comic for girls’, Misty, as well as a special preview of “Read Em and Weep”, the new serial killer novel by Pat Mills set in the world of British comics, with illustrations by Kevin O’Neill (League of Extraordinary Gentlemen)!

2000AD Prog 2011 is priced at £4.99/$9.99 and will be available from all good newsagents and comic book stores in the UK and Ireland on 14th December 2016, and all good comic book stores in North America next month. It will also be available digitally worldwide from the 14th from the 2000AD DRM-free webshop and the Apple, Android, and Windows 10 apps!

‹ Step aside WWE, here’s Johnny (Cougar, that is)! But could this comics hero make a comeback today?
It’s a Christmas Cracker! The Christmas Beano is On Sale Now ›