Here’s a quick round up of comics-related news items, recalling Marvel UK, Alan Moore‘s partnership with Gene Ha on Top 10, a look at some gorgeous Doctor Who art and more… 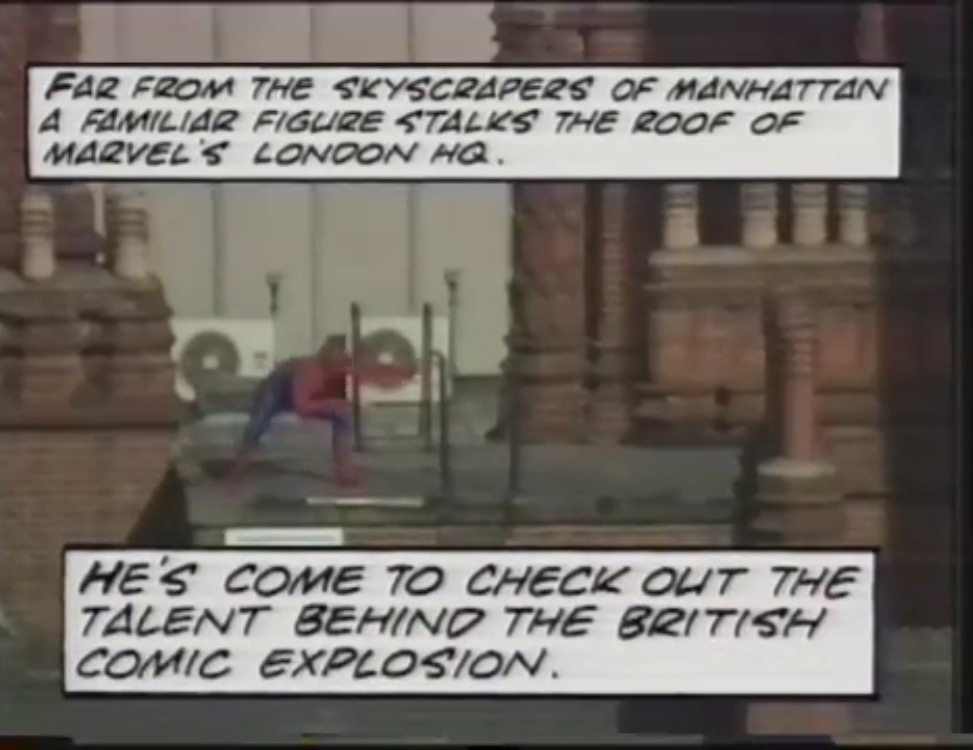 Tim Quinn had a big hand in bringing this documentary about. 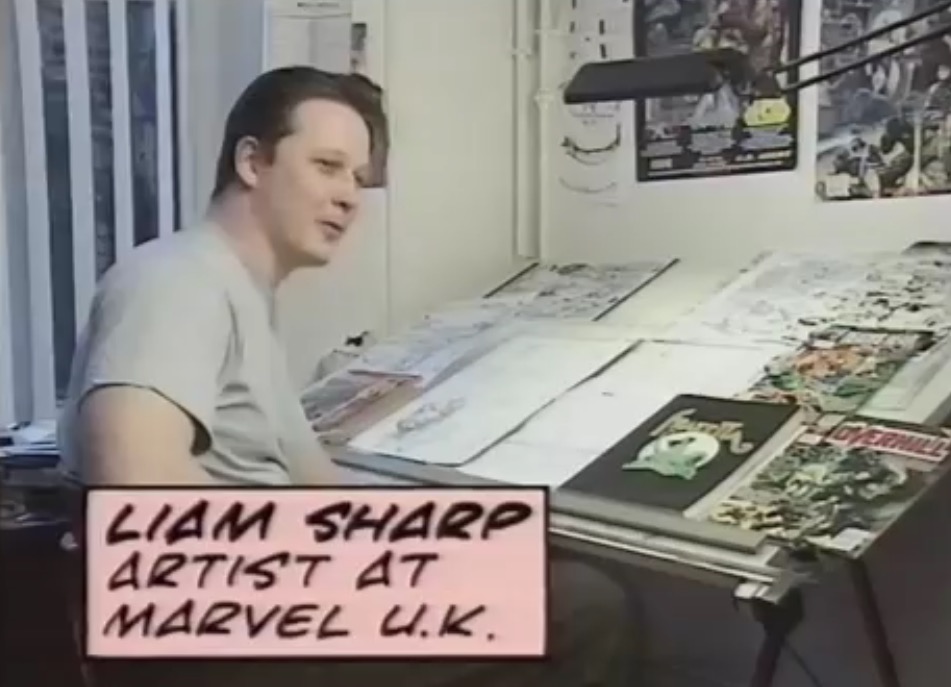 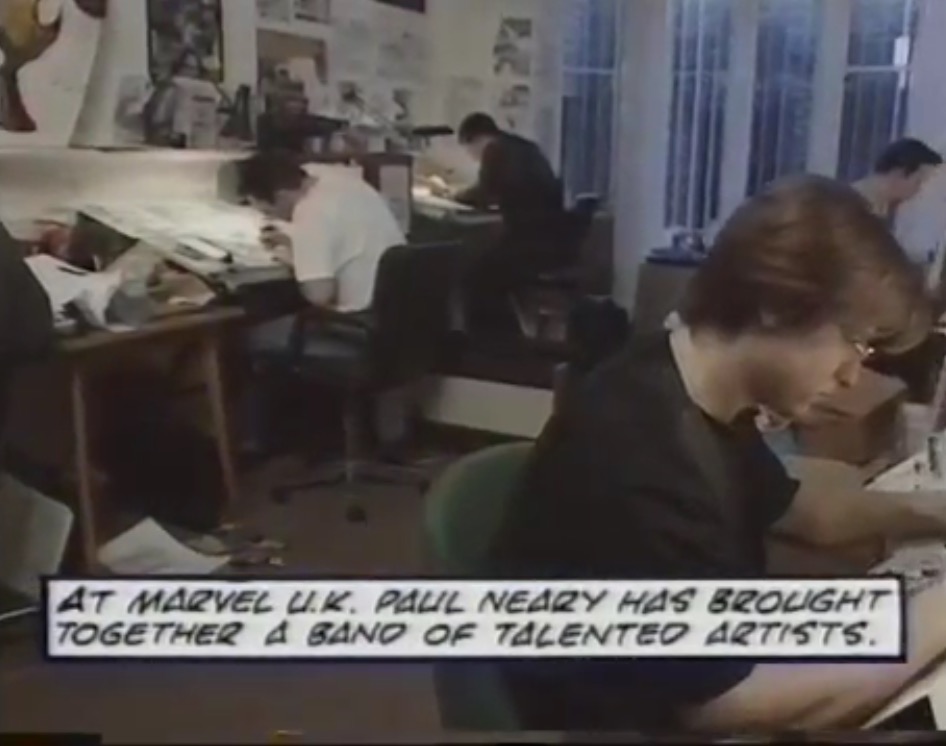 The Marvel UK Bullpen, mid-1993. Pictured here are Andy Lanning, Bryan Hitch, Martin Griffiths and Liam Sharp. Artist Andrew Currie is just in shot on the left. Colourist and artist Steve Whitaker was also a regular in the basement, as was Edmund Perryman, among others

It’s a great show, for all its use of Marvel animated shows and sequences from the live action Incredible Hulk TV series. Fascinating to hear Stan’s views on bringing comics to the big screen and see some 1990s computer games, too. My betting is that it might not be on YouTube long – it would be great to see Channel 4 release it professionally.

Liam Sharp was  by the way recently interviewed by Comicosity about his work on Wonder Woman, which is drawing to a close. 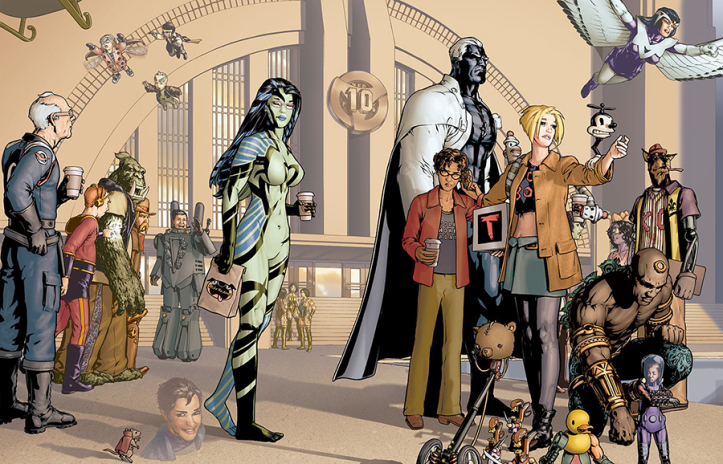 • Artist Gene Ha talks about working with Alan Moore on Top 10, published by America’s Best Comics (ABC) line, an imprint of Wildstorm Comics – and creating a new future as the setting for Cable’s early years in The Adventures of Cyclops and Phoenix in an interview for MoonMythic.

Advised to approach Alan by Alex Ross, thinking he might get the Promethea assignment, which Ha felt (at the time) might be the easiest ABC project, he was surprised when Moore tasked him with Top 10, a book that had hundreds of colourful, superpowered characters in a mishmashed retro-futuristic world.

• Lew Stringer takes a look back at the first issue of the DC Thomson humour comic Cracker, which launched in January 1975. It lasted just 87 weekly issues before merging into The Beezer in 1976. He’s also recently covered the short-lived tabloid comic Buzz, launched in 1973. Both items well worth a look.

• Over on Bear Alley, comics archivist extraordinaire Steve Holland reveals he is working on a project indexing old British comics annuals… and if you’ve listed the contents of an annual you’ll know that it, too, is surprisingly time consuming. “Especially if, like me, you spend a couple of hours trying to figure out where all of the strips and features were reprinted from (as was the case with many annuals from the 1970s),” Steve notes, “that can be made doubly hard if the strips were originally Italian.” Good luck with it, Steve.

• Congratulations to Ex-Tharg David Bishop, who has been awarded a Robert Louis Stevenson Writing Fellowship which, he says, he will use to write a novel.

• The latest Mega City Book Club podcast (Episode 33) offers everything you wanted to know about Strontium Dog but were afraid to ask.

Just kidding!” say the team. “Nearest thing to it though.” Host Eamonn is joined by Steve Green, co-director of the Strontium Dog Fan Film, and they talk about ‘The Search and Destroy Files 01’. Get it here

• Talking of podcasts, congratulations to Dan Butcher, Vince Hunt and Tony Esmond, who have just released their 100th episode of the Awesome Comics Podcast, crammed with its usual indie comics craziness and silliness. Listen to it right here!

• Smashed reports Poland’s Warsaw Comics Festival will lose three years’ worth of city subsidies, totalling $44,500, because a comic ridiculing Polish nationalists was distributed at this year’s event. Tomasz Lesniak and Rafal Skarzycki’s Poland: The Champion of Poland, lampooned nationalists, racists and anti-Semites, and that didn’t sit well with the local nationalists, who complained to the city council. The council released a statement saying, “After reviewing the comic we explicitly declare that we do not accept its content,” and announced it would sanction the festival.

• The internet is these days awash with great art -including Doctor Who art. Richard Piers Rayner, a guest at Lancaster Comics Day on Sunday 11th June, has just posted this gorgeous convention commission: Paul McGann as the Eighth Doctor and ‘The Oncoming Storm”. Richard has a new web site in the works, but you can follow him on Twitter @RPiersRayner 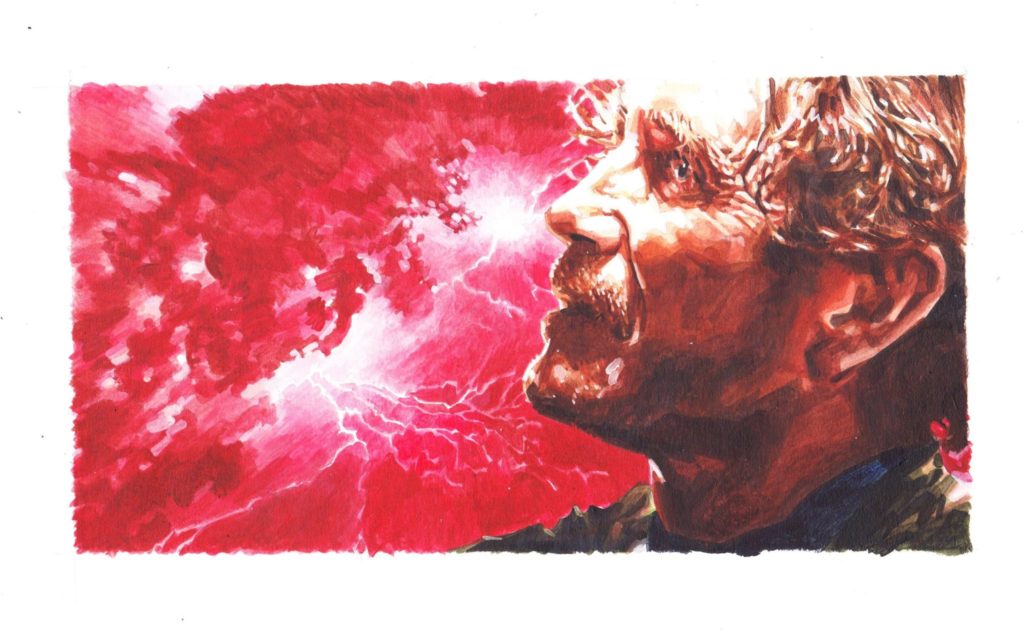 Paul McGann as the Eighth Doctor and ‘The Oncoming Storm”. Art by Richard Piers Rayner

• And Finally… Battling barnacles! Nick Frost is to play Captain Pugwash in a live action movie to shoot next year, based on the cult children’s character created  by John Ryan.

“Besides Winston Churchill and Henry VIII, Captain Horatio Pugwash seems like a role I was born to play,” he says. ‘I can’t wait to get going.” Chortle reports the film, which starts production next year, will have the pirate travelling to Botany Bay, where he eventually finds himself at the helm of The Black Pig on a mission to rescue Tom the Cabin Boy’s father, who is marooned on a volcanic island.