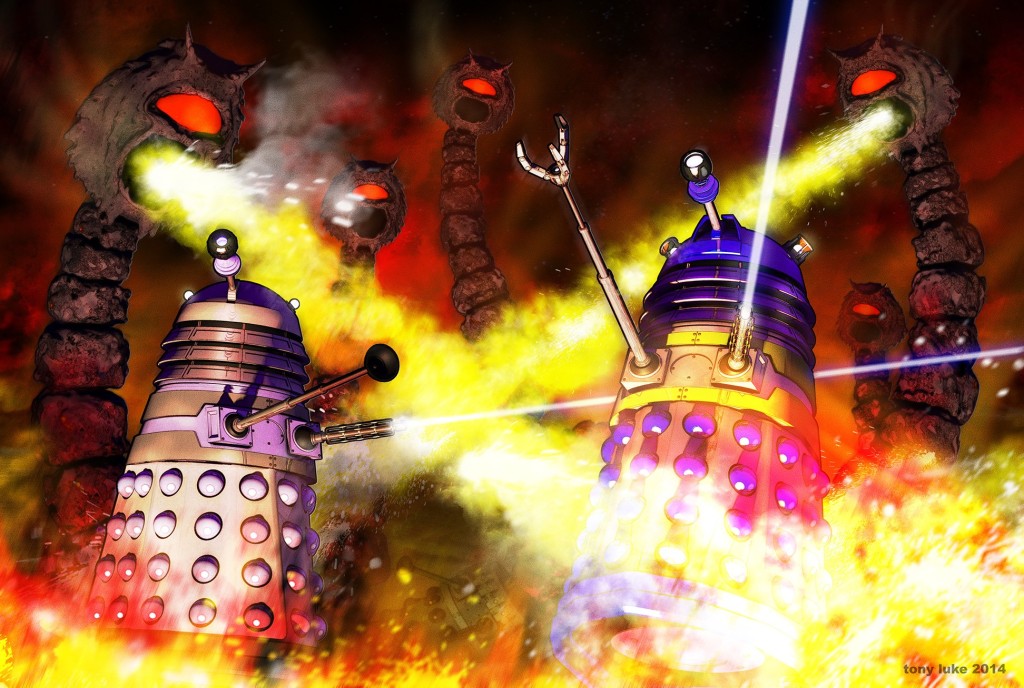 Daleks versus Rock Snakes by and © Tony Luke

The art is a private commission, inspired by a conversation Tony had with fellow artist Steve Pugh who suggested this “Scene We’d Like To See” featuring the Daleks mixing it up with the Martian Rock Snakes.

Despite ongoing health issues, Tony is prepping a new and very hush-hush comics/ manga project with regular collaborators Alan Grant, Yasushi Nirasawa and Les Lindon Garner of Sixus1media, and special guests. He also recently put some of his archive comics media clips up on his YouTube channel RengaCentral, and you can see a selection of more recent artworks over at the venerable DeviantArts site http://tonyluke.deviantart.com/gallery/.

In his spare time he ‘jams’ impossible scenes like the Dalek one seen here, or the Godzilla vs. Cthulhu smackdown here.

While it’s rare Martian Rock Snakes and Daleks are seen together (except drawn by artists like Tony for fun), like the Daleks, the Rock Snakes have appeared in comic strip form, most famously, perhaps, in a newspaper strip for the Daily Mail, drawn by none other than Trigan Empire co-creator Don Lawrence. The Gerry Anderson Complete Comic History has a feature on the strip here. The Rock Snakes also appeared in some Captain Scarlet comic strips for TV21.

The Daleks comic strip appearances are too numerous to mention here, but we think they’ve rarely encountered such a fearsome opponent as they have in Tony’s painting!

Writing on Facebook, Tony says “One short college film project that I tried to do back in the early 1980’s was a story involving a colony of Mysterons on Venus sending Rock Snakes to Earth to cause havoc, climaxing with the snakes being taken out by Angel Interceptors and Graham Bleathman and Graeme Bassett’s AC21 team. ITC, of course, said ‘no’….

“Bassett and Bleathman were two of the best and most talented people I’ve ever had the pleasure of working with; back in the day, I pushed a whole bunch of their stuff under the noses of then-TV bosses in the naive hope that we could get some kind of series up and running somewhere; I did manage to namecheck them on Blue Peter, though, despite Biddy Baxter expressly telling me not to!”