Some new wooden Star Trek DIY models from Incredibuilds are on their way to stores later this year – and look terrific.

The IncrediBuilds collection, which also includes animals, famous buildings, Star Wars items and Marvel Superheroes, features do-it-yourself, customizable, freestanding models, made of Earth-friendly, FSC-certified wood. Intended for all ages of fan, all their products include step-by-step directions and colouring and crafting ideas. No glue or tools necessary.

An imprint of Insight Editions, Star Trek author Dayton Ward has revealed he was asked about writing material for the range last year, and is writing the booklets that will supplement special releases of their new U.S.S. Enterprise models.

IncrediBuilds releases two models – one of the original Enterprise, the other the NCC1701-D from Star Trek: The Next Generation – on 12th June 2018. 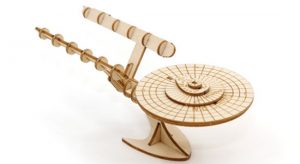 “Several of the IncrediBuilds kits are offered in what are called ‘Deluxe Editions,’ he explains on his blog, where he has some sneak peeks of the new titles, “in which the model comes with a special 32-page book that offers all sorts of juicy details about the item being… you know…built. For example, the book accompanying the Millennium Falcon build offers some history of the ship, ‘tech specs’ and a tour of its features, its owners, ‘famous flights’, and so on.

“There’s also a bit of ‘behind the scenes’ info about its creation for the Star Wars films, including an interview with one of the people responsible for designing and building the original model.

“For both Enterprise editions, I took a similar approach, so you’ll get a brief rundown of the ship and their place in Starfleet history, as well as a look at each filming model’s design and creation for their respective television series. Lots of pictures are jammed into both books, as well.”

“… I had a ton of fun with these,” Dayton enthuses. Writing anything Star Trek with a younger audience in mind is something I’ve been wanting to do for a long, long time.”

• More advance info on the IncrediBuilds Star Trek range is here on StarTrek.com