The Dandy: What Just Happened?

British comics haven’t had so much media coverage in years, if not decades, in print and on radio and television than in the last few days since The Guardian broke the news that DC Thomson were considering cancelling The Dandy. But just how much of the publicity over The Dandy’s print cancellation and rebirth as an e-comic was stage-managed to gain publicity for the title?

Why Tuesday 14 August?
The story began with a piece about the possible closure of the comic on The Guardian website at 8:04pm on Monday 13 August. Having had just over two weeks of solid Olympics coverage across the British media when other stories were squeezed for space and time by the achievements of British athletes and the British public becoming intrigued with sports they had never watched before, Monday 13 August was the day after the closing ceremony in London with news outlets reviewing the ceremony and the games in general.

That meant that the first day of the news cycle that would not have major new Olympics coverage was Tuesday 14 August, the day The Guardian went to print with the story and by which time the rest of the papers and media outlets had picked up on the on-line story as well. As we know, the potential cancellation got massive media coverage on Tuesday.

Why The Guardian?
In September 2009 The Guardian published “free” reprints of DC Thomson comics for their readers to enjoy over the course of a week and, as well as the behind the scenes commercial contacts that this would have provided between the two organisations, The Guardian sent a reporter to write a piece on the comics side of the DC Thomson business.

In addition to this something else happened on Monday 13 August that went unnoticed by most. At 5pm at the Edinburgh International Book Festival, the largest literary festival in the world, The Heart And History Of The Dandy talk took place with author Andy Stanton chairing a talk from DC Thomson archivist, and 20 year veteran of The Dandy editor’s chair, Morris Heggie ably helped on sketching duties by artist Gordon Tait. The talk was filmed by the camera crew that are currently filming a television documentary about The Dandy for broadcast around the comic’s 75th birthday in December.

The BookFest always has a signing session after each talk and The Dandy one was attended not just by Morris and Gordon but also by Craig Graham, the current Dandy editor. They weren’t the only DC Thomson staff members in attendance that evening with management in evidence from both the main company and their book publishing subsidiary Waverley Books, who published The Art And History Of The Dandy history book that the talk was based on. The Guardian article went live on the newspaper’s website less than two hours after the signing session concluded at the Edinburgh BookFest. Who is the headline sponsor of the Edinburgh International Book Festival this year? Yes, it’s The Guardian.

How to keep the publicity going?
As the Tuesday media storm subsided on Wednesday, the next step to keep the publicity going after the initial tease of the possible cancellation was to make an announcement of what was actually going to happen. On Thursday 16 August DC Thomson confirmed via Twitter that the print Dandy will reach its 75th birthday in December before regenerating into an as yet unknown entity, the e-Dandy. After the build-up over the previous couple of days, that announcement was widely reported in print, on the internet and on television. It even made it on to the BBC News at 6pm that evening.

Is there a bigger picture?
Perhaps. Travelling from Cactusville to Beanotown, The Beano is running a major Golden Ticket competition promotion during August with a grand prize of a family trip to the Universal theme park in Florida, hundreds of smaller prizes and, in addition, consolation prizes of a three month free subscription to the electronic version of The Beano for every reader who doesn’t win something else.

While not all will take up that offer, and social media has already thrown up a number of persistent complainers who think that such an e-subscription is of no value, with weekly sales of around 38,000, that is a lot of readers that will potentially get the e-Beano during September, October and November. Indeed so many people tried to log in to The Beano website to register their prizes that it crashed under the server load.

Come December when the publicity push about the print Dandy celebrating its anniversary and the e-Dandy launch is in full swing, all those e-Beano subscriptions will run out but the title will be able to feed off that Dandy publicity to try to get those subscribers to pay to continue their e-Beano subscription. 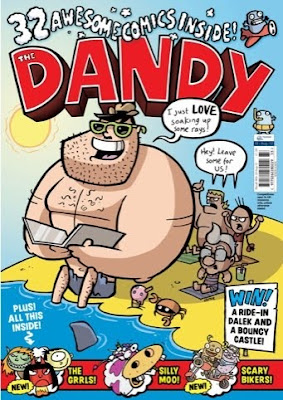 Do we want an e-Dandy rather than a print Dandy?
So what we have all feared for the last year or so is now official, The Dandy went down on our watch, and those of us that grew up with paper comics will mourn its demise whether we read it or not. However e-publishing is here, and here to stay. We may not remember a time without televisions, but today’s young readers of the Dandy do not remember a time without i-Phones or i-Pads.

Critics who say that e-comics will not work because children don’t own i-Phones or i-Pads have apparently never been in a household that has both children and modern portable technology. The children may not own the devices but they know how to use them and they do use them, often just as much and with more knowledge about their operation than the adults.

In a family home an i-Pad is often treated as a item for all the family just as the then new video recorder was 30 years ago. Indeed as videos helped television watching became a bigger part of children’s lives then, DC Thomson were able to get their characters on to television screens. As it made commercial sense for the company to get its characters into the other media that children used in the 1980s, so it makes commercial sense to bring their characters to today’s portable electronic devices and, when it comes down to it, a revamp of The Dandy into an e-comic is better than no Dandy at all.

How do we sum this all up?
downthetubes is written by British comics fans for British comics fans and we do our best to promote British comics and their creators wherever they and their work appears, in comics, magazines, newspapers, books, apps or on the internet, whether that work is decades old or brand new. With The Dandy we are about to lose an old friend that we will mourn, but we look forward to seeing its future offspring.

Let’s hope that we are not the only ones.

The official Dandy website with its countdown clock to the aniversary changeover is at www.dandy.com.

Dandy and Beano are copyright DC Thomson and Co Ltd.