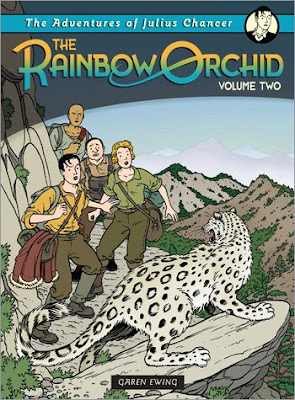 Writer/artist Garen Ewing has put up the cover of the eagerly anticipated Rainbow Orchid Volume 2 over on his blog. This shows hero Julius Chancer and his companions being menaced by a snow leopard and he advises that the book will be available for sale from 5 July 2010.

Garen also gives a list of convention appearances that he will be making this year including the Bristol International Comic Expo at the end of May and Caption at the end of July.

It is also good to see that, in addition to the comics cons, he will also be appearing at two of the major British literary festivals. While both festival’s programmes have yet to be published, Garen will be appearing at the Hay Festival in the Hay-On-Wye booktown on the Welsh border on 3 June 2010, while on 23 and 24 August he will be in Scotland at the Edinburgh International Book Festival. It is good to see his bande dessinee style Rainbow Orchid getting this sort of attention from the literati.

More details of Garen’s appearances are available in the events listing on The Rainbow Orchid website.