Harrogate-based Thunder Road Touring Theatre‘s new touring co-production The Body Snatcher opens on the 23rd October – and they have a fantastic poster to promote their UK tour, created by Loose Nut Studio. 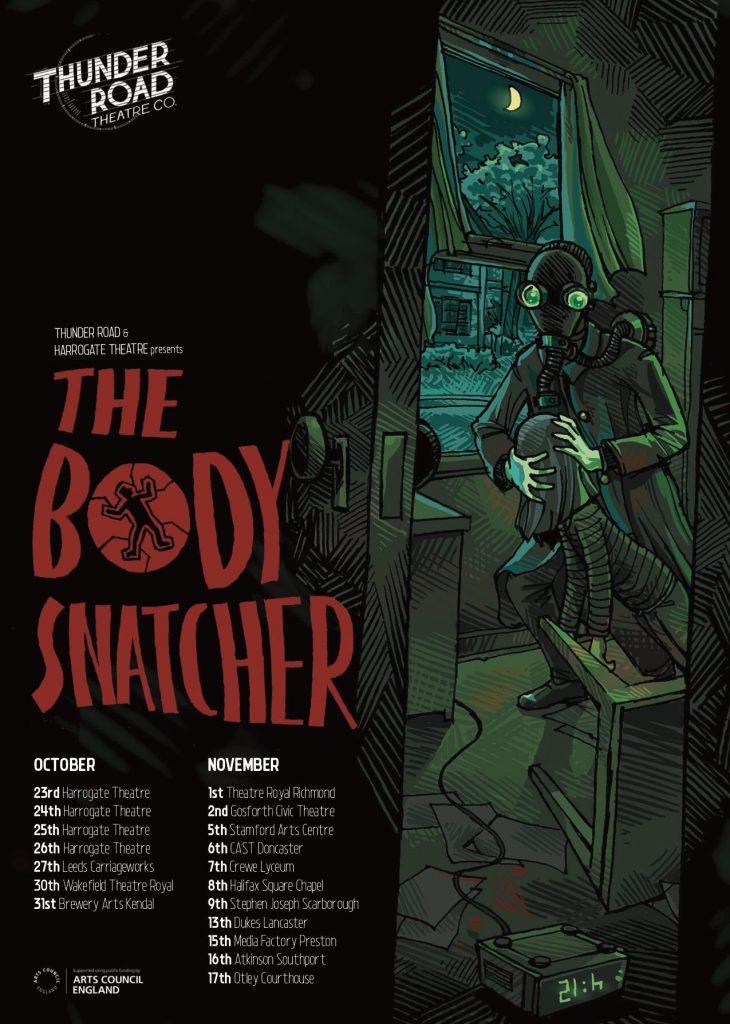 The Body Snatcher is the company’s  most ambitious project to date, touring to 15 venues across the North of England, offering hair-raising horror with live music, inspired by the Robert Louis Stevenson short story. The show is written by Ian Townsend, performed in association with Harrogate Theatre and supported by Arts Council England.

Loose Nut Studios is actually Brandon Bolt, an artist who has been working in the illustration industry for over seven years, six at Voyager Expanded Learning, but who is now freelancing.

“My full-time job having been what it was, most of my professional illustrations have an educational, kid-oriented angle, but I specialise in cartoons for any occasion,” he says. “I adapt swiftly to new circumstances, which may be a product of my fancy liberal-arts education, or maybe it’s just survivability; I can’t really tell anymore.

“I’ve gotten to draw dogs, cats, birds, firemen, doctors, astronauts, velociraptors, goddesses, talking clams, talking lungs, boneless children, and there was that one time they had me do a picture of some guy getting tarred and feathered. That’s just the stuff I’ve been paid for!

“We won’t go into what’s in my high school notebooks. Everyone will be better off, trust me.”

• The Body Snatcher opens at Harrogate Theatre on 23rd October, running until 26th October, and then goes on national tour | More about Thunder Road Theatre at www.thunderroadtheatre.org | Facebook | Twitter