On 8th May 2020, ground-breaking Finnish creator Tom of Finland would have turned 100 years old – and many celebrations have been planned internationally, despite the Coronavirus Pandemic and lockdowns in many countries. The Tom of Finland Foundation is encouraging fans of his work to mark the anniversary, too, with events that include “Up for It“, a challenge to artists on Instagram.

“We celebrate this centennial to honour what this one artist contributed to humankind,” says Durk Dehner, President and Cofounder of the Tom of Finland Foundation, which will announce the Tom of Finland Emerging Artist Competition with its judges on 8th May, a contest to encourage, showcase and reward artists.

“Tom devoted his life, his artistic career that spanned over five decades, to the vision of Homosexuals being free to be happy in loving whomever they desired – and in turn, for all of society to be supportive of his view. In many parts of the world it’s not safe to be LGBTQ+, so there is still much work to be done.

“On 8th May, we encourage all to make something beautiful and share it – bake a cake, open a bottle of wine and raise a toast to Tom for all that he created and left us in his legacy.”

Born on 8th May 1920, Tom of Finland (Touko Laaksonen, who died on 7th November 1991) has long been recognised as one of the 20th century’s great visual innovators. As he confronted the stigmas and stereotypes that long burdened homosexual desire, his depictions of empowered gay men fully enjoying their sexuality proved liberating on social and aesthetic levels alike. The sheer range of his influence on the culture at large is immeasurable.

His work assumes a key role in the art historical discourse (Tom’s drawings are in the collections of institutions like The Museum of Modern Art, New York and regularly appear in museum shows throughout the world), but also occupies a place in every corner of the popular imagination.

For a preview of the year to come, Let’s Go Camping With Tom of Finland ran in Kendal, UK from 28th September – 19th October 2019 as part of the Lakes International Comic Art Festival line-up, and charted the artist’s career including his famous comic series.

In February, Brooke Wise curated a Tom of Finland Foundation fundraiser exhibition, I Won’t Bite as part of Frieze Los Angeles and included a range of artists who support the Foundation’s mission to protect and promote LGBTQIA art and artists.

Tom of Finland: The Darkroom opened on 21st February and has been extended to 19th June at Fotografiska Tallinn in Estonia.  It is temporarily closed but offers an online tour, a recorded TV interview and podcast with curator Berndt Arell. The exhibition concentrates on photographs by Tom and his artistic process, and travels to Stockholm and New York.

Tom of Finland: Love and Liberation opened on 6th March at House of Illustration in London and is scheduled to end 27th June. It is temporarily closed but offers several online tours currently with Durk Dehner, and he will be in a live online conversation with the show’s curator, Olivia Ahmad on Tom’s birthday at 6p London time. The exhibition features iconic, previously unseen drawings and will be slated to travel to other institutions.

Tom of Finland: 100 Years opened online at David Kordansky Gallery in Los Angeles on 14th April and is on view through 12th May. The exhibition, which can be viewed online, features never-before-exhibited drawings in pencil and pen and ink, as well as Tom’s personal collages.

Tom of Finland’s work will also be seen at Art Basel in September and The Community in Paris will curate a large-scale exhibition of Tom of Finland Foundation’s permanent collection.

Tom of Finland: Made in Germany will have an autumn opening at Gallery Judin in Berlin. Tom’s first ever exhibition was in Hamburg in 1976 and he did many commissions for German clients; the gallery has devoted a show and publication to these seminal years. An accompanying book, edited by Juerg Judin and Matthis Katstens, will be released in November, from Skia Editore.

Two more publications on Tom of Finland will be released this year on the occasion of the artist’s birth. The first, from Finnish publisher Like, Tom of Finland, will be released on 8th May and is an updated Finnish language book that sheds light on Tom’s private life, his art and his spirit of joyfulness; the publishers will host a Live Instagram at 7.00pm Helsinki time on the day. Find out more about their Tom of Finland books on their web site (in Finnish) or follow them on Instagram.

The second, a new edition of Tom’s biography from Cernunnos, Tom of Finland: The Official Life and Work of a Gay Hero, is fully illustrated and reveals a life of art, pleasure and liberation with texts authorised by Tom himself and a foreword by Jean Paul Gaultier.

“I should say, if I remember right, it was in the beginning of the ’70s,” Gaultier recalls. “I saw some drawings in Kake. It was one of those little stories that were quite funny. I just saw it and thought: ‘Oh my god! What is that?’ I was super impressed and shocked in a very good way.

“I must say after that I just wanted more and more and more. The men were shown as sexy, beautiful and gentle, and almost feminine, refined, etc. It was that type of men you have to love. So it’s Tom’s drawings that show that you can be attracted to sexy men.”

Men.com is releasing an anthology series based on, and inspired by, the classic works of Tom of Finland with Cory Krueckeberg, Bruce LaBruce, Terry Miller, Matt Lambert and François Sagat directing and bringing their interpretations of the Tom universe to life.

“Tom of Finland’s drawings have always intrigued me and turned me on as a kind of burlesque of gay male sexuality,” said Bruce LaBruce of his involvement in the series. “It’s a performative masculinity that also happens to be extremely hot. There is much joy in the representation, as well as an underlying current of humour and irony.”

In 2017, the country of Finland celebrated its 100 years which included the release of the biopic, Tom of Finland, from award winning filmmaker Dome Karukoski, an account of a vital chapter of Gay history, that also had its own exhibition in Turku, and now available on Blu-Ray and DVD.

In 2016, Taidehalli in Helsinki presented Tom of Finland: The Pleasure of Play, a major exhibition from Artists Space that portrayed the artist’s work on wider scale than ever seen before. This year, member organisations of the Finnish Cultural and Academic Institutes are supporting the Tom of Finland exhibitions in the United Kingdom and Japan, as is the Embassy of Finland in Tokyo.

The Finnish Diplomatic Missions in the US produce a Suomi–Finland Podcast series in English. The Consulate General of Finland in Los Angeles visited TOM House earlier this year and will release a podcast episode on 7th May, that reveals an intimate side of Tom and his contributions to society. Available on Spotify, Apple Podcasts and SoundCloud.

A memorial plaque will be placed on an apartment house where Tom lived in Helsinki, the Postal Museum in Tampere will present an online talk with Susanna Luoto about Tom’s correspondence, and on Tom’s birthday MSC Finland – TOM’s Club will do an Instagram presentation of posters Tom created for his own club.

“When I was a young man in the late ’50s, Tom of Finland invented an impossible-to-live-up-to Gay male look that defied stereotypical Queerness before I ever realised there was such a thing,” notes filmmaker John Waters. “I wanted to meet the men depicted in his drawings but struggled at the time, because the only people that I saw in Baltimore that looked that butch were Lesbians.

“He’s still a god to me, a great artist, one of the founders of filth, a spiritual leader from the gutter. If you ever want sex today, just pray to him and it will happen.”

•  Are you an Insta artist, or better yet a BOLD Twitter artist? Or both? All artists who love #TomOfFinland are invited to participate in this challenge for his birthday. Create an illustration in your own style and post it on 8 May with #TOMs100 – more details here

THE TOM OF FINLAND FOUNDATION 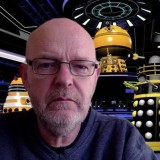 The founder of downthetubes, John works as a comics editor, writer, as Creative Consultant on the Dan Dare audio adventures for B7 Media, and on promotional work for the Lakes International Comic Art Festival.

Working in British comics publishing for over 30 years, his credits include editor of titles such as Doctor Who Magazine, Star Trek Magazine and Babylon 5 Magazine. He also edited the comics anthology STRIP Magazine and edited several audio comics for ROK Comics. He has also edited several comic collections, including volumes of “Charley’s War and “Dan Dare”.

He’s the writer of “Crucible”, a creator-owned project with 2000AD artist Smuzz, published on Tapastic; and “Death Duty” and “Skow Dogs” with Dave Hailwood for digital comic 100% Biodegradable.