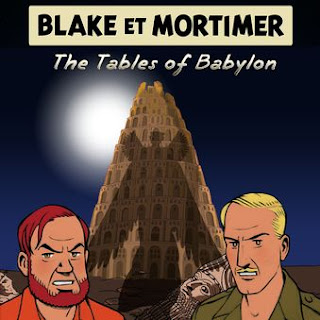 Fans of Blake and Mortimer, the bande dessinees adventure saga published in the UK by Cinebook, may be interested to know a new PC game based on their adventures is now on sale.

Explore, enjoy and think is the key formula of Blake and Mortimer and The Tables of Babylon (which we suspect has been wrongly translated from French – that should be ‘tablets’), an adventure full of mini-games that will lead to the search of the first origins of writing in the ancient Sumerian empire.

1956: The Suez Crisis. While Paris, London and Tel Aviv are under pressure from Cairo, mysterious murders decimate the very select circle of archaeologists. Is there a link between those facts and the various threats that are terrorising the free world? You will have to be clever and work alongside with Blake and Mortimer to investigate in riddles, as well as scientific fantasy. This will take you all around the world: the sources of civilisation … into the ruins of ancient and mysterious Babylon.

But it will not be easy: the clock is ticking! Will you be successful in time? Prepare to take on a twenty mini-games that will challenge your sense of deduction: quizzes, puzzles, teasers, cryptography…

The suspect translation of the title aside, the screen shots on Get Games suggest this could be positively fiendish to complete.

• Blake and Mortimer: The Tables of Babylon is available from Adventure Shop

• A Mac version is in development: bookmark this Get Games page for info