Home › Features › Creating Comics › In Review: Over the Line, an introduction to comics poetry

In Review: Over the Line, an introduction to comics poetry 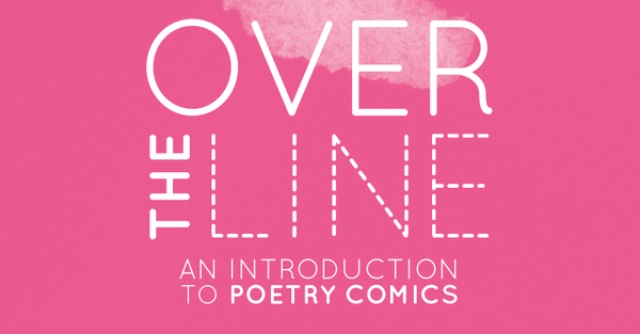 Sidekick Books has just published Over The Line, an introduction to comics poetry edited by poet and comics editor Chrissy Williams and comics artist Tom Humberstone, a project that has earned high praise from the likes of Alan Moore, who described the project as a “spine-tingling moment when two attractive and sophisticated forms, both admired for their rhythm and sense of timing, eye each other across the cultural dance floor.” 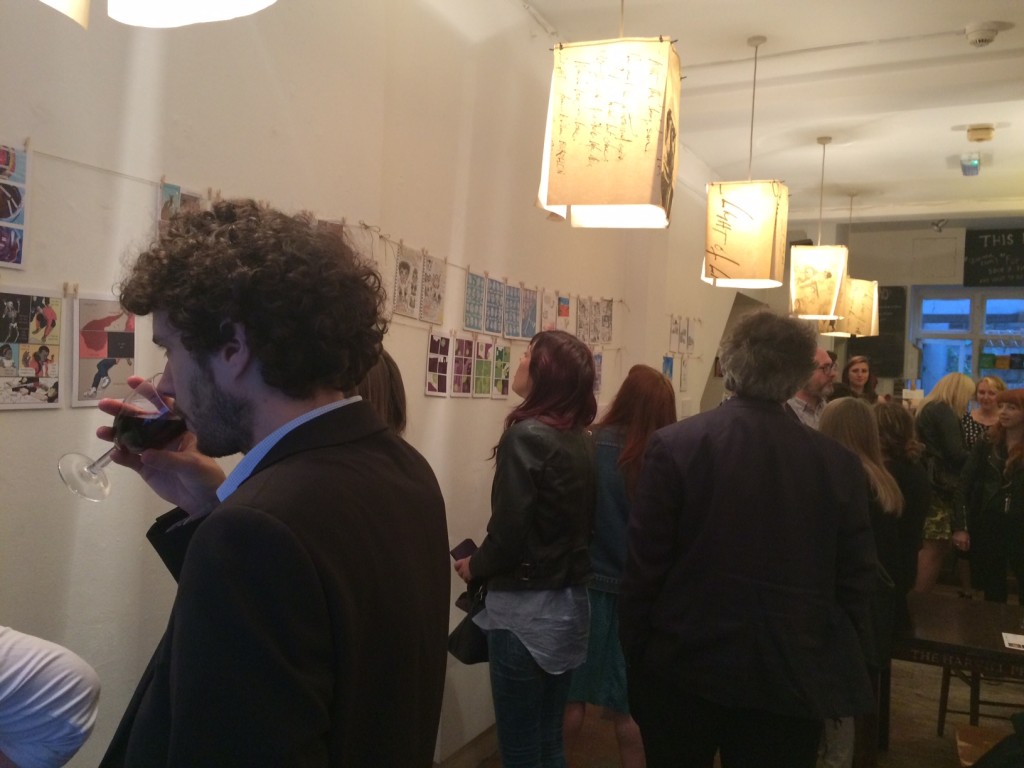 The launch of Over the Line at the Poetry Cafe, London

The book had its launch at the Poetry Cafe in Covent Garden, London last night and I was lucky enough to be there. Readers embracing the poetry side of the project included Sophie Herxheimer, Anna Saunders, Amy Key, Chris McCabe, John Aggs, Chrissy Williams and others.

(Chrissy is back at the Cafe tomorrow to deliver aPoetry and Comics workshop, and the comics side of the project will be celebrated on 17th September at Gosh, details below).

Comics, when they are at their best have an element of the poetical.  Whether it be in the flow of art, the words spoken or the story told it combines to make a thing of individuality to our chosen hobby. But we all know that, right? What Over the Line does is combine the two worlds of comics and poetry together, not for the first time but in a way that is both hugely ambitious and brilliantly satisfying. 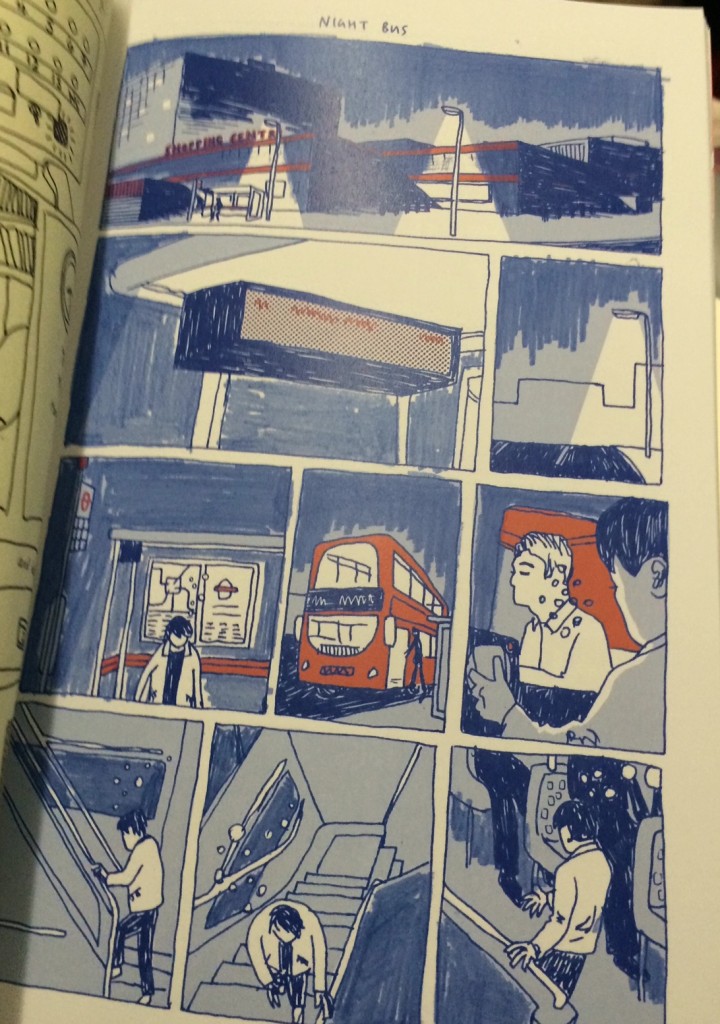 Over The Line is both the name of the exhibition at The Poetry Cafe and the name of the anthology that its curators, Chrissy Williams and Tom Humberstone, have brought together.

I grabbed a few moments with Chrissy at the launch and she said it was time for a project like this. The worlds of poetry and comics are vibrant and inventive in the UK and this is a book that she hopes reflects this fact.

Part funded by the Arts Council of England, she and Tom have grabbed some great talent who are both already established and new to the scene. Coming from an open submissions call-out, there are some great talents on show in this anthology. 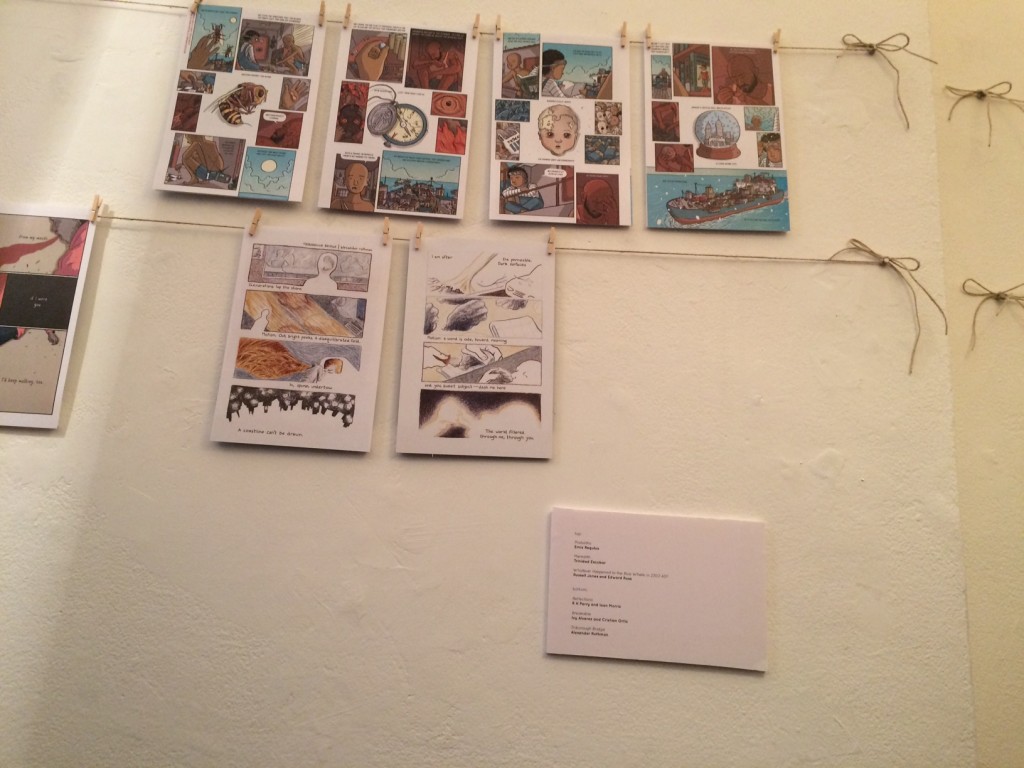 Artwork from Over the Line on display at the Poetry Cafe. The exhibition runs until the end of October.

The walls of the cafe are adorned with actual pages that look pulled from the comic itself. Chrissy says that this is a stylistic choice that allows the reader to experience the flow of the book on a wall with the only movement needed being that of the human eye. To me, it also seems like the scattered pages of a well read book pinned to a wall, cared for and loved. 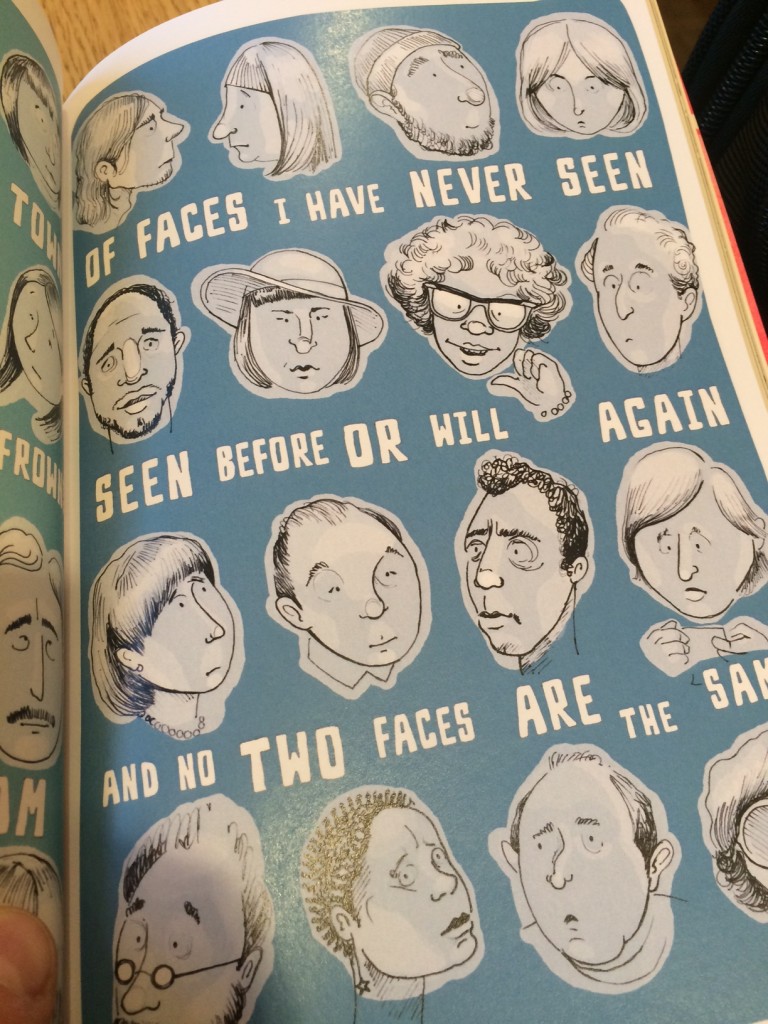 “Sea of Faces” by Anna Saunders

For me, poetry is a hard thing to pin down as an idea.  We often speak of a visual poetry, yet a more formal poem, in a book for example, has a tempo and a rhythm to its flow and storytelling. This is different from that of a comic. A comic reader (I can only speak from my experience) pauses more, you drink in the image as well as the words, perhaps… A poem with images needs almost an enforced slow down or a reread. The motion of the eye from right to left needs adjusting ever so slightly.

This occurred to me as I read this anthology and got me thinking. Being (I hope) open minded, this whole project is something I find really intriguing. It allows for the closer examination at certain points of the rush, rush of a reading experience these days. It slow it down, gives you time to stop and think, combining the motion of the words with the stillness of some of the images in your head. This is something I implore you to explore on your own. 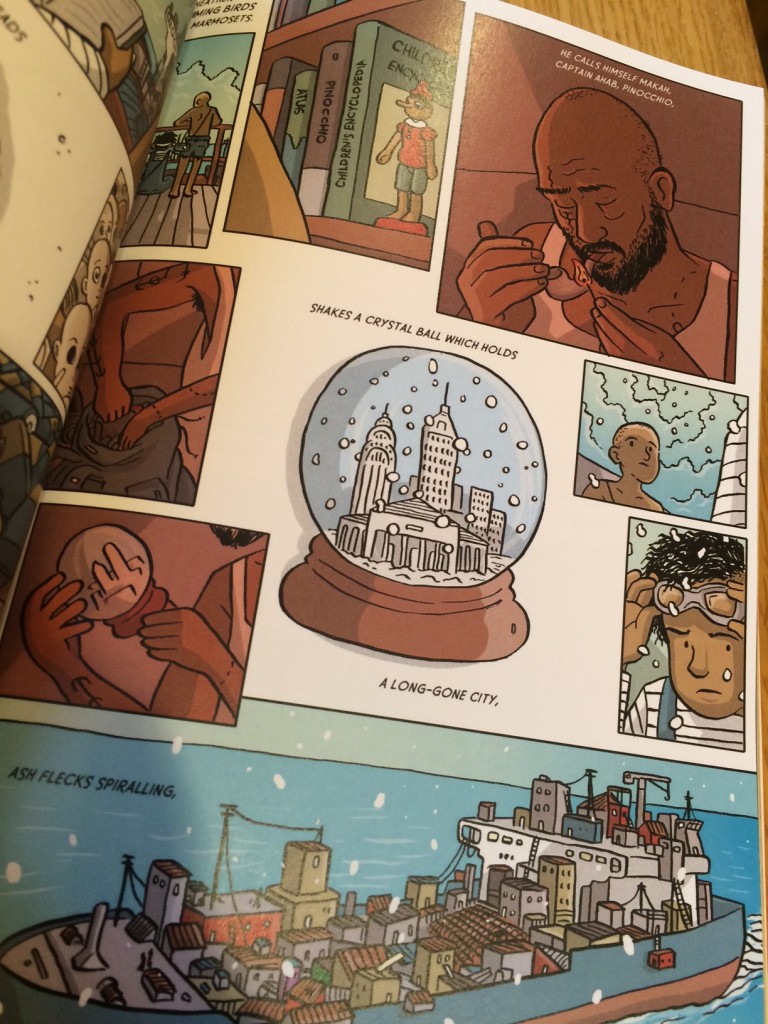 There are loads of comics in this spine bound anthology and a couple of the standouts for me are “Night Bus” by Tim Bird, “Whatever Happened to the Blue Whale in 2302AD” by Russell Jones and Edward Ross and “Sea of Faces” by Anna Saunders. Exceptional work.

The book itself isn’t just a book of comics. It also explains the history of Poetry Comics and the style and offers comparisons of both mediums. It’s a big dose of thoughtful and inspiring work with over 70 pages of brand new work from 35 poets and artists.

Cleverly introduced and written with real care, this is an eye-opening anthology – and the Poetry Cafe is a great venue to visit.

• You can still catch the exhibition until the end of October at The Poetry Cafe, 22 Betterton Street, London, WC2H 9BX. The cafe will host Poetry and Comics workshop with Chrissy Williams this Saturday (5th September 2015) from 11.00 am – 5.00 pm

Many thanks for reading.