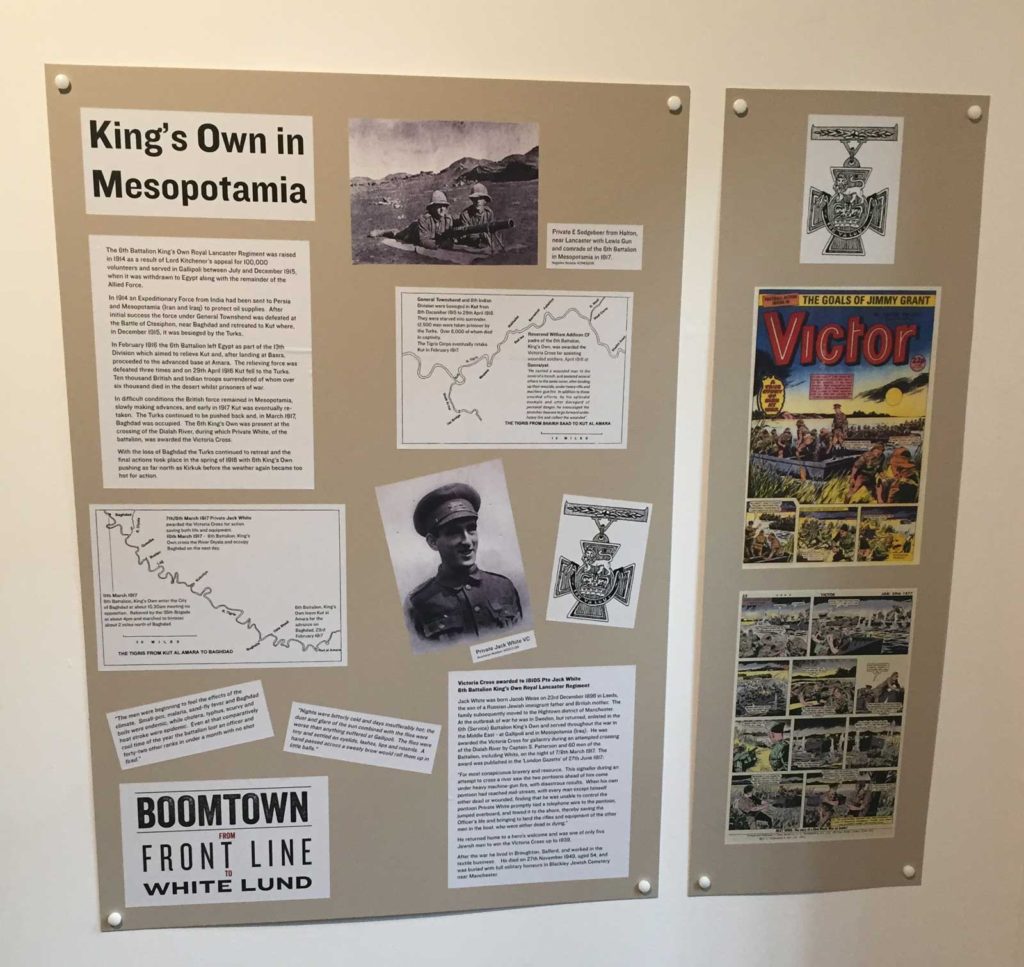 Running at the Lancaster City Museum, Lancaster, until Sunday 12th November 2017 is “Boom Town“, combining the story of the King’s Own Royal Lancaster Regiment in action on the Western Front, Salonika and Mesopotamia in 1917, and tragic events on the home front in Lancaster and Morecambe.

The King’s Own Royal Lancaster Regiment aspect of the exhibition includes the story of Private Jack White, one of only five Jewish men to win the Victoria Cross up to 1939. Serving throughout World War One in the Middle East – at Gallipoli and in Mesopotamia (Iraq), he was awarded the Victoria Cross for gallantry during an attempted crossing of the Dialah River by Captain S. Patterson and 60 men of the Battalion, including White, on the night of 7/8th March 1917.

The exhibit includes images of a 1987 issue of the weekly war comic Victor (Issue 1358), which retold the action on its front pages, drawn we think by Spanish artist Frederico Maidagan, one of the many Spanish creators who worked on the comic, also known for his Commando work and his adaptations of the James Bond movies Octopussy and A View to a Kill in the 1980 for Scandinavian publisher Semic, for whom he also drew several Phantom stories. 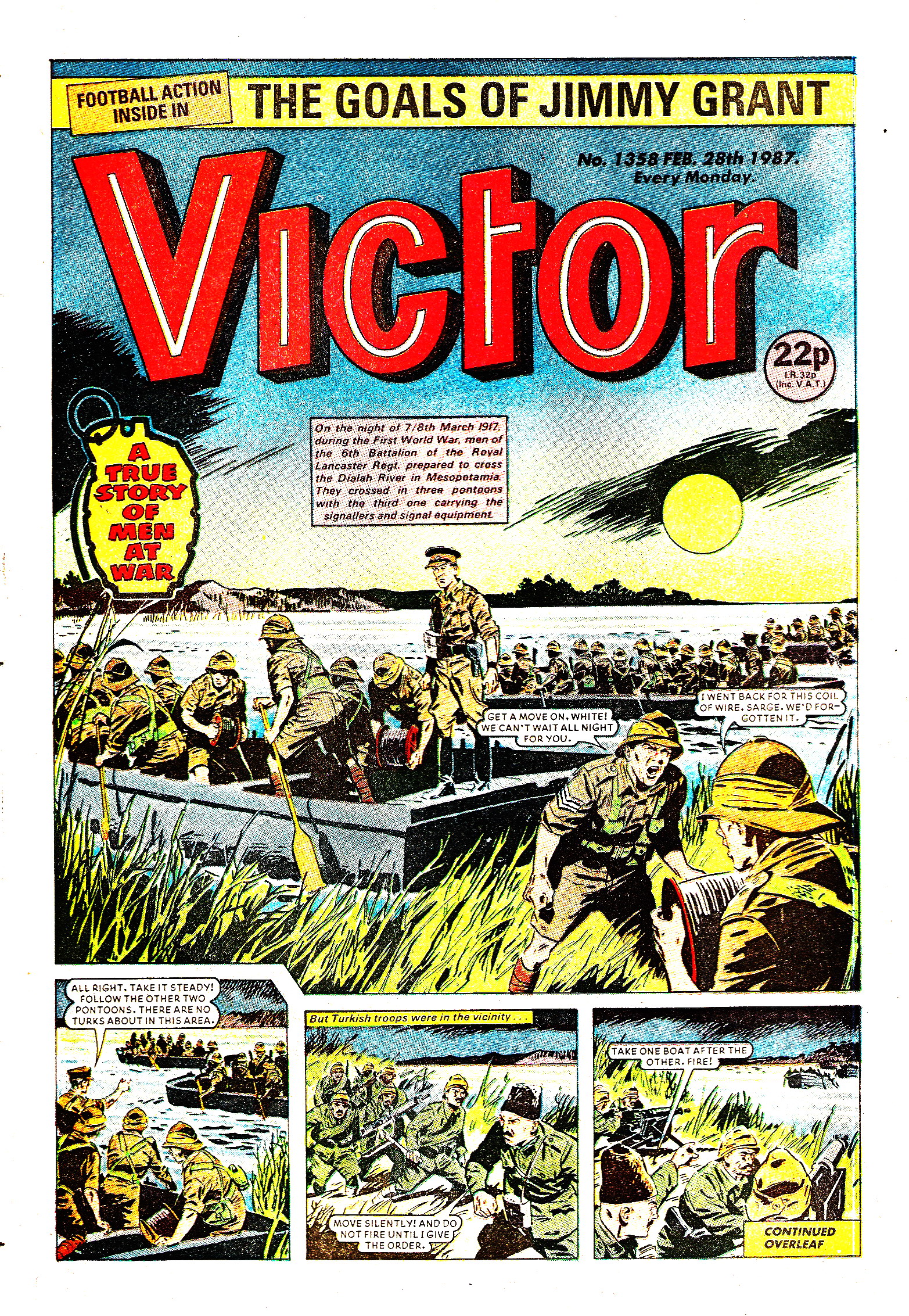 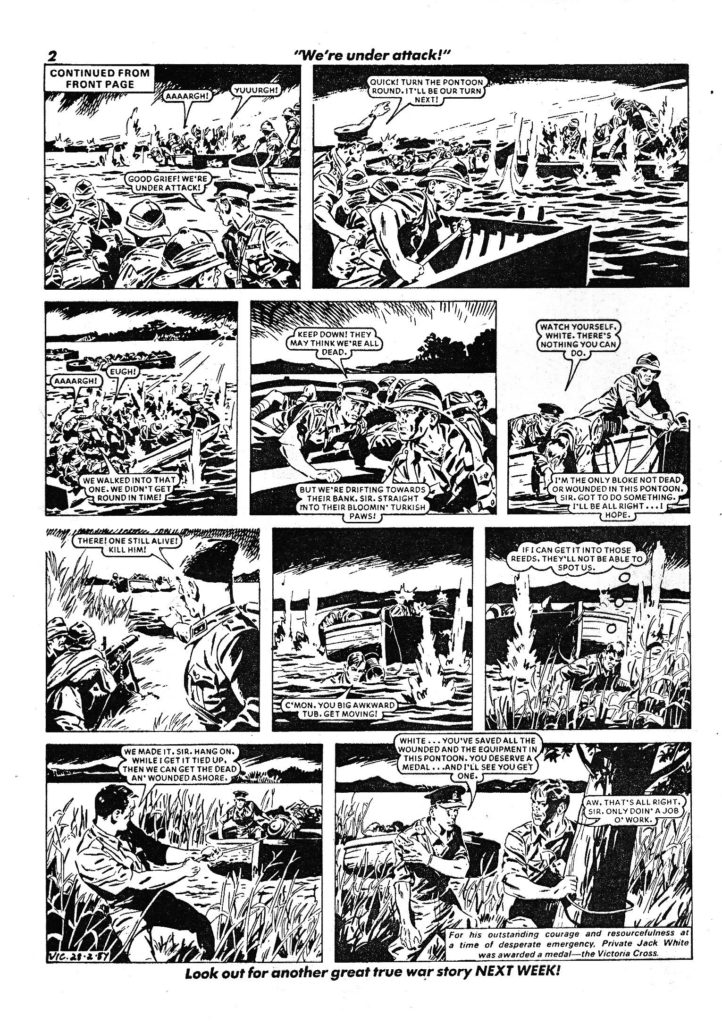 First published in 1961, Victor continued as a comic until 1994, ending on Issue 1657. There is a fantastic guide to the comic (and some other DC Thomson adventure weekly comics here – www.victorhornetcomics.co.uk

There’s also section on the King’s Own website devoted to the the regiment’s appearances in in comics. The Victor ran stories for years, and then repeated them at least once. Jack White’s first appeared in January 1977  and then again in 1987.

Issue 1358 also include strips such as “Hammer Man”, a former blacksmith turned knight in the reign of Henry the Fifth, on a mission to the Far East, “Hallam’s Hardest Mission” the story of an SBS operative in Kalanistan, “The Goals of Jimmy Grant”, a football tale, “You’re in the Navy, Now”, a naval tale set during World War Two, a one-page “Figaro” gag strip, “The Jewel in the Sword”, a fantasy tale. “Grasshopper Green”, another WW2 tale and “Sheppard’s Flock”, set during the Prussian War and centring on a hero war artist. The issue rounds off  with the bizarrely titled “Suddenly, the Raiders Were There”, set in Greece and also taking place in World War Two. While largely war centred, that’s quite a range of strips and styles. 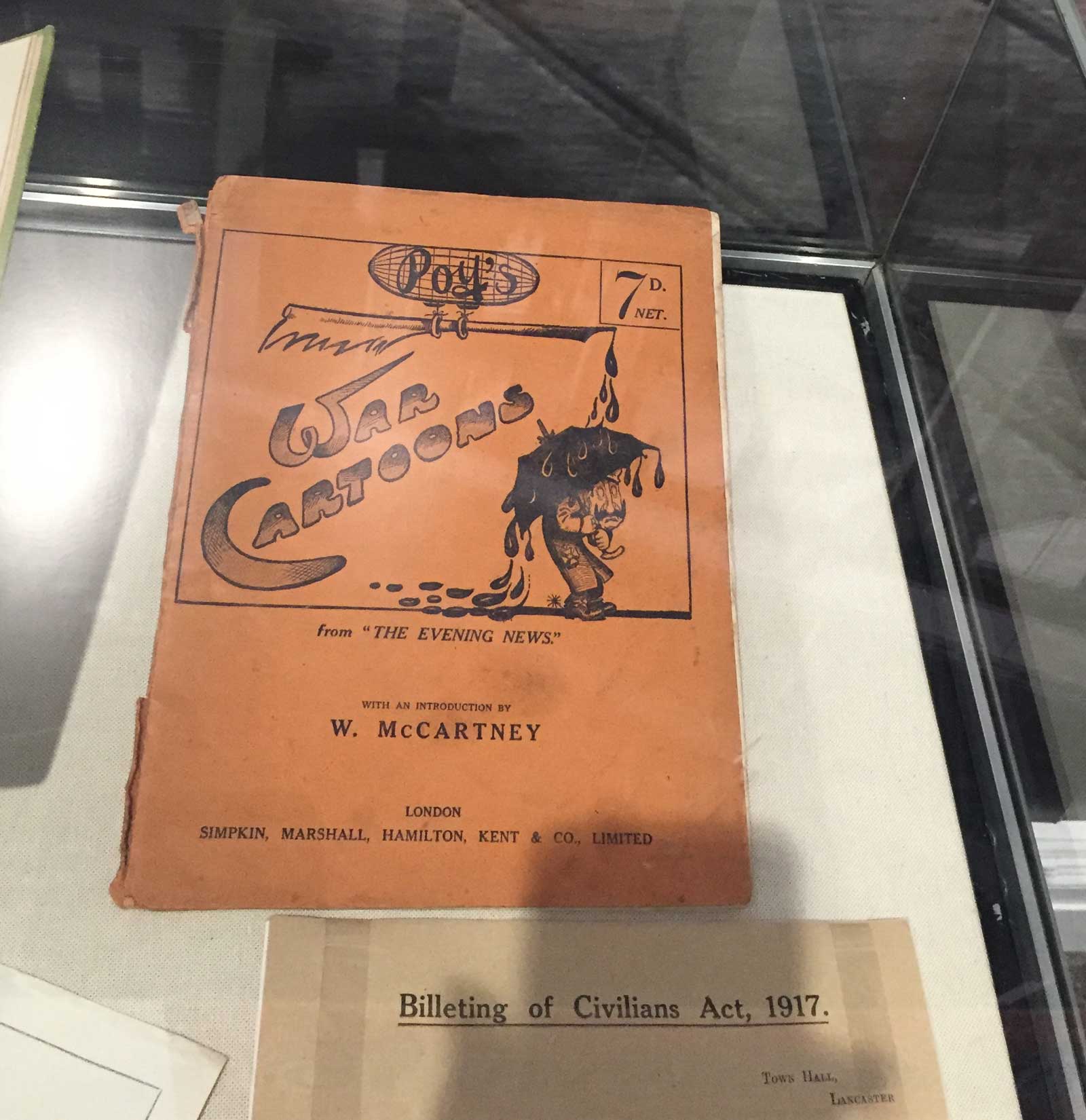 Along with paintings from the Museum’s huge collection of King’s Own -related art, there’s also memorabilia such as this intriguing-looking :War Cartoons” book on display

The “Home Front” aspect of the exhibition covers the Royal Visit of May 1917 and the local war production, including the massive National Filling Factory at White Lund, Morecambe, which was a town itself (and was totally dismantled after the war).

This year marks the centenary of devastating explosions at the Filling Factory which took place over 1st – 3rd October 1917. The exhibit explores the need for supplies and shells for front line troops, focussing, of course, on the local King’s Own Royal Lancaster Regiment; the building of shell-making and filling factories in Lancaster and Morecambe; war work and changes it brought to the district; the explosions and remarkable acts of bravery that saved so many lives at the works and around the area. 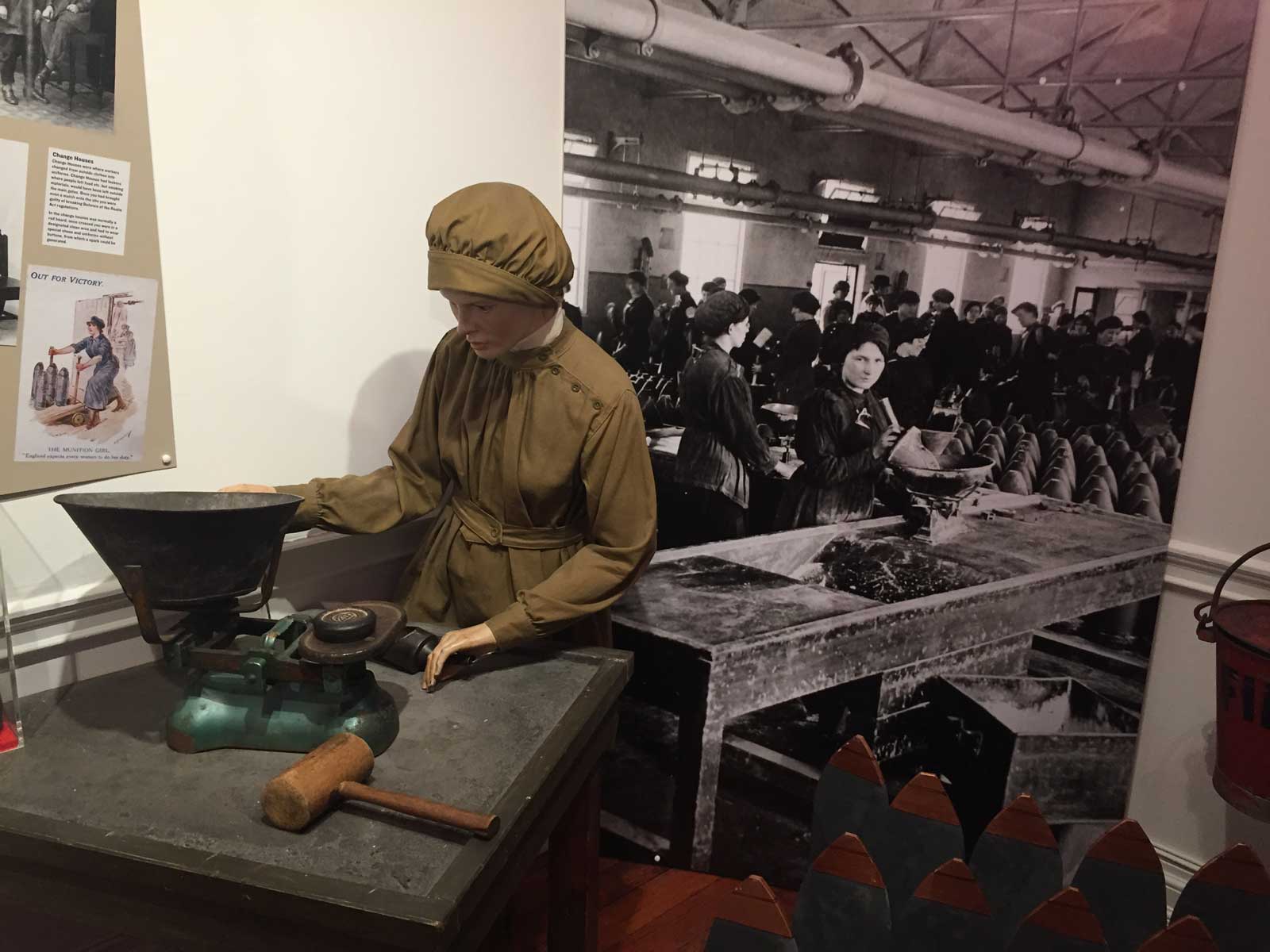 Visitors are encouraged to cast their vote as to how the fire started. It was, of course, not the only munitions factory to have been destroyed during the war and, incredibly,although it brought such devastation and many deaths, the event was not fully reported at the time and there were, apparently no prosecutions as the cause of the blast was unknown – and remains so to this day. 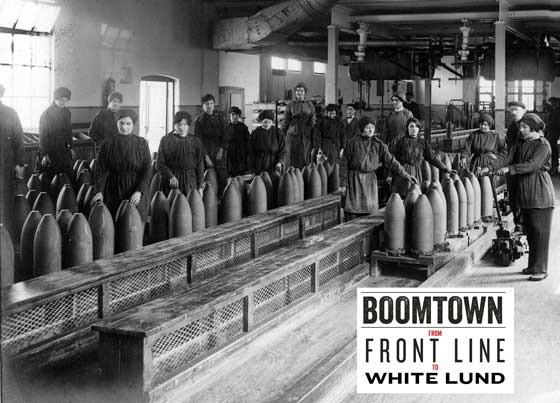 Fans of “Charley’s War“, written by Pat Mills and drawn by Joe Colquhoun, will recall a munitions factory featured prominently in one arc of the Battle Picture Weekly story. (You can read more about “Charley’s War” on our micro site here)

A programme of events and activities accompanies this exhibition including talks, walks and an Exploration Day at the Storey on 30th September, organised by the Regional Heritage Centre at Lancaster University.

• Go to the King’s Own Museum website for all events details and lots more information about the collections and this anniversary: www.kingsownmuseum.com

Victor © DC Thomson. With thanks to Colin Noble for artist identification