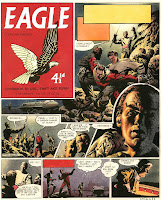 Courtesy of downthetubes contributor Jeremy Briggs, here’s a handy list of links to pages about, and featuring the art of,  just some comic creators who arguably created some of Britain’s best comics up until the 1990s.

I’m sure there are other creators deserving similar accolade, particularly many modern creators working on 2000AD and other titles, but this is a start!

• Frank Bellamy
frankbellamy.co.uk is a terrific web site devoted to the man who not only drew strips for Eagle but also TV21, Swift and the Radio Times.

• Luis Bermejo
Luis drew mainly war stories and made many contributions to the Thriller Picture Library, and took over the Eagle character Heros the Spartan from his creator Frank Bellamy.

• Jesus Blasco
The artist who brought chilling life to The Steel Claw. British comics expert Lew Stringer points out that the images on the page are not not his most representative style.

• Geoff Campion
Personally, my favourite Campion strip is Spellbinder, which appeared in Lion, but he also
drew Stonewall Jackson for Eagle

• Mike Noble
Probably one of the best ‘likeness artists’ ever when it came to bring comics life not just to puppet series such as Captain Scarlet for TV21 but live action shows like Robin of Sherwood for Look In.

• Ken Reid
Ken’s hilarious characters such as Faceache and Frankiestein are as funny today as when he first drew them. 2000AD co-creator Pat Mills wanted Ken to draw a strip for the title, but managers balked at the idea of there being anything funny about the survivor of a nuclear war living in a fallout shelter. Some of the samples on this page aren’t actually by Ken Reid, but the pages does lead to some great links about this important cartoonist.

• Dudley D Watkins
Creator of Oor Wullie and many striops for an assortment of DC Thomson titles including Topper.