Den of Geek Celebrates B Movies 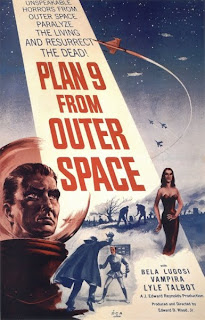 The Den of Geek website is taking a week long look at the phenomenon that is the American B movie. Today, Karla Helion presents an overview of B movies, examining the circumstances under which they emerged, and over the next few days the site will be looking at how the films developed through the decades. Tomorrow, it’s the 1940s and 50s. There’s also a countdown of the top 11 ‘So Bad They’re Good’ movies and, naturally, Ed Wood and Roger Corman are both in there!
Usually made using pre-existing sets, low paid actors and stock footage, B movies tended to be less than 80 minutes long and were shown at cinemas following a more expensive and glossy ‘A’ feature. Whilst they were naturally often in the shadow of the films they accompanied, many B movies have gone on to have a huge following of their own.