How to be a Super-Hero, by Stan Lee

British writer and editor Tim Quinn both worked with and interviewed Spider-Man co-creator Stan Lee, whose death has been announced, aged 95.

Here, he pays tribute to the American writer and publisher who did so much to shape Marvel Comics in the 1960s, and whose work continued to inspire many creators and fans across decades… including young children in Merseyside recently, through a poem published for Tim’s FAB 4000 comic project…

I was working with children of seven and eight years of age, creating brand new stories in pictures.

The children were fantastically inspired in their work.

Each class lasted well over two hours and the concentration was intense.

We kicked off drawing hedgehogs and bananas and ended up turning each child into a brand new super-hero.

When I mentioned the name Stan Lee, every child looked as if Father Christmas had just entered the room.

I loved him back when I was seven and read one of his Twilight Zone mystery and monster tales in his pre super-hero days.

Once he started letting rip with his countless super types in 1961 and on through the 1960s, for me he was the comic book equivalent of The Beatles. The magic they were producing in music was so similar to what Stan was doing with his words in the comics. By 1966 and 1967, his Silver Surfer character, Jesus Christ returned as a super-hero, captured the times so perfectly with his musings and commentary on the foibles of mankind.

Years later, we had a flurry of letters between us as I invited Stan to work for me on a project with The Saturday Evening Post magazine. Work for me! Stan! And he did, finishing off his first piece with the words “let me know if it’s not right and I’ll try again”. He always told me that. I never asked for him to try again. Kind of wish I had now.

Cut ahead a few more years…

I’m walking down a corridor at Marvel Comics New York offices. I’m going to meet and interview Stan for The South Bank Show, a TV documentary series. Although by this time we have talked many times on the phone, I can’t help worrying that it would be a drag if my lifelong love of the man should be altered by meeting him in person.

Of course it wasn’t. He was even more Stan in the flesh. A funny guy. Even funnier when the cameras stopped rolling and he gave us the lowdown on Marvel behind the scenes. By this period, the little company he had built up was a huge global concern. “I don’t know three quarters of the people here any more,” he told me. “I actually don’t want to know half of them!”

Stan wrote this poem for me. It shows how we can all be super-heroes. You don’t need to be born on planet Krypton or bitten by a radioactive giraffe. Just let your humanity kick in. It most certainly is a poem for our troubled times. I read it out in each school I go to and I can see lights going on in the eyes of children of all ages.

No flags at half mast for Stan this evening. He was always a full mast kind of guy. And now, with a single bound he is up, up and awaaaaay.

TO BE A SUPER-HERO

Just give your heart
To those who are ailing
Let them know
That they’re not alone!

Inspired by the amazing students from St Vincent’s School for the Blind in Liverpool, England; and brought to life by a team of marvellous talent from the comic book world, the Fab 4000 – which has support from across the globe, including musicians, comic creators and more – is a regular comic series featured on #CreateChange. The stories are meant to help young people find their inner hero to deal with bullies and societal pressure—all the while building the World’s Largest Super-Hero Team on Earth! Find out more on Facebook 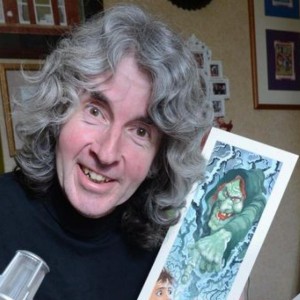 Accentuate the Positive: Comicraft’s Richard Starkings on the state of the comics industry