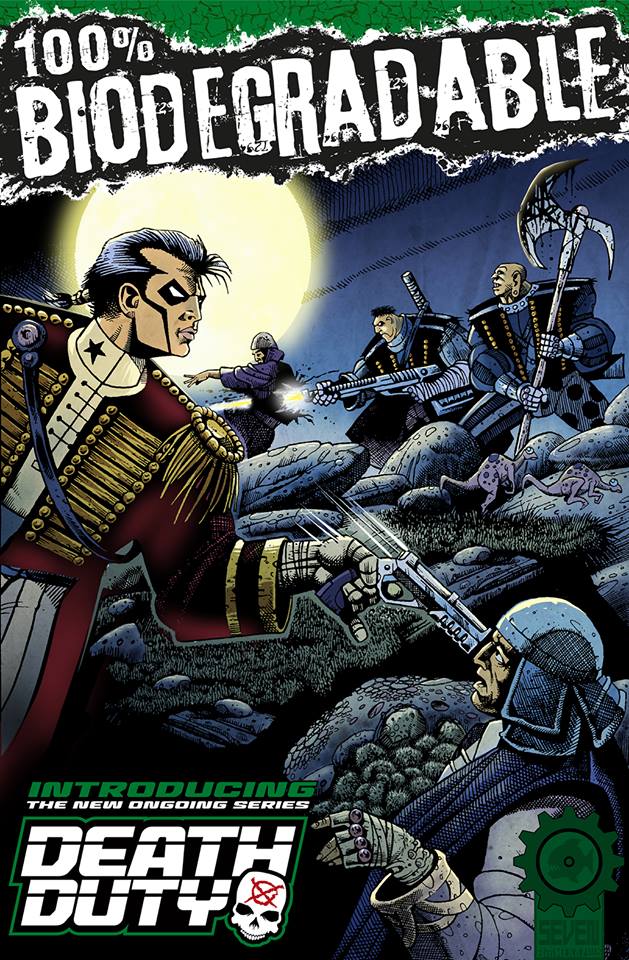 Issue 7 of the digital anthology 100% Biodegradable – edited by Dave Hailwood and John Kirkham – is now available to buy on Comicsy or Drivethru for just 69p/$0.99.

Along with your usual smattering of brain munching goblins, boneheaded barbarians and delusional psychiatric patients, this issue features a new ongoing series – “Death Duty“, by John Freeman (that’s me) and Alan Burrows (Commando, Starblazer, 2000AD) with letters by Ken Reynolds.

‘In a war-torn future, crime and disloyalty to the Terran Empire are punished with conscription into mercenary law enforcement squads: soldiers consigned to do or die in order to prove their commitment to the common good. The average life expectancy for a recruit is four months, hence the street slang for the job: Death Duty.

Dissidents in the Terran Empire are put on the infamous “List” – tracked down by Death Duty squads and terminated for their rebellion with extreme prejudice. For most of the Dutymen, exactly who they kill doesn’t matter – until one of their number, Travis Wilson, begins to question the missions they’re assigned and goes AWOL – a wanted man.’

This is the first ever publication “Death Duty”, a spec strip I wrote some time ago now as part of a wider “WarWorldz” concept, (other stories are in the works, including one with art by Dave Thomson). I’m grateful to Alan for permission to run it and to Liam Sharp for permission to use a character I co-created with him, Rourke of the Radlands.

“Death Duty” will continue in future issues of 100% Biodegradable, written by myself and Dave Hailwood, and drawn by Brett.

• 100% Biodegradable – 30 pages, colour and B/W – is available from Comicsy and DriveThru. It’s probably worth grabbing a copy before 1st January 2015 if you’re going to do so, in case the VATMESS causes any unforeseen supply problems!