Despite the sad cancellation of Hi-Ex in Inverness, there are an increasing number of Scottish comics events in 2013.
The Glasgow Charity Comic Mart returns to the Panopticon Music Hall on the Saturdays of 2 March, 1 June, 7 September and 30 November, the Glasgow Film Festival continues its comics strand courtesy of Mark Millar in late February, the Glasgow Comic Con returns for its third year at a date and location that have yet to be announced, the Edinburgh International Book Festival from 10-26 August has turned up some very interesting comics events in previous years, Collectormania will be at Glasgow’s Hillhead Arena again on the weekend of 24-25 August and, while it is too far ahead to be announced yet, we would be disappointed if the Dundee Comics Day didn’t run again at the end of October as part of Dundee University’s Literary Festival.
In addition to these old favourites, the Dundee University manga/anime convention this year is Doj-Con, following the D-Cons and Dee-Con of previous years, which is on Saturday 13 April, the Scottish capital gains the Edinburgh Toy And Comic Mart at the RAF Club on Saturday 20 April, while MCM Expo comes to the Glasgow SECC for the long-winded Memorabilia And Scottish Comic Con on Saturday 31 August. 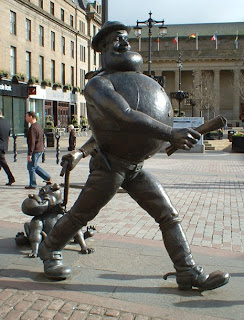 The University Of Dundee has been a consistent part of the Scottish comics scene for some years now hosting the Dundee Comics Day and the name changing D-/Dee-/Doj-Cons and they have just announced a new comics event – the Dundee Comics Expo.
This free Expo will take place in the University’s Tower Building, where the annual Comics Day is held, on Saturday 30 March 2013 from 11am to 4pm. The Tower Building is a short 10 minute walk from Dundee’s train and bus stations, and not that far from the imposing statue of Desperate Dan, Dawg and Minnie The Minx in the city centre.
In addition to signing tables for artists including Gary Erskine and Alex Ronald, and sales tables for dealers including Plan B and small pressers including Team Girl Comic, the event will be welcoming artist/writers David Lloyd and Karrie Fransman to Dundee for the day, both of whom will be giving free talks.
More guests are planned and will be announced on the event’s Facebook page.