Charley’s War collection draws to a close with ‘The End’ 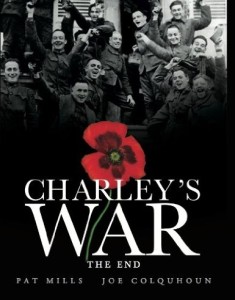 Charley’s War Volume 10: The End, published by Titan Books, goes on sale in all good book and comic shops on 25th October 2013, wrapping Charley’s World War One adventures and bringing the current the current collection of the comic to a close.

In The End, written by Pat Mills, we finally reach the epic conclusion of Charley’s story, and the harrowing final days of World War One.

(Titan Books have previously stated they will only be publishing the World War One Charley’s War stories, and have no plans to publish the only partially completed World War Two saga, which was not written by Pat.)

As with some of the more recent volumes of the series, the result of discussion between Pat Mills and former Titan Books series editor John Freeman and Joe Colquhoun’s estate, this volume again includes reproductions of some strip pages from Joe Colquhoun’s original artwork.

These stunning pages, returned to Joe at Pat’s insistence during his lifetime, have been lovingly restored by Moose Harris for the project.

The tenth action-packed volume of Charley’s War is rich in the detailed minutiae of the terror-punctuated existence of a Tommy, and includes a feature on the Treaty of Versailles and Germany’s capitulation.