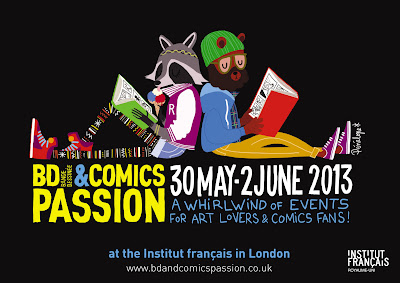 The rise of the comic book in the past few years has been staggering, and even to the casual observer, unavoidable. With the likes of Nemo and Habibi topping the charts, and comic book artists such as Chris Ware, Bryan Talbot and Neil Gaiman becoming household names, the genre, after being looked down on for so many years, is finally being recognised as a creative powerhouse, and given the consideration it truly deserves.

Appearing under different guises – hardback, softback, tall, short, thick, paper, digital – and under different names – comic books, graphic novels, comix, bandes dessinées – comic books are taking over our bookshops, our films, our clothes, our museums… To celebrate this momentum and to explore the many influences of comic books, the Institut français launched a new festival in 2011, the BD & Comics Passion, bringing together legendary creators for innovative events and thrilling discoveries.

Once again, the programme will prove “as imaginative as the work itself” (Metro) with groundbreaking events such as Drink & Draw, a one of a kind event mingling live drawing and wine tasting led by renowned British Master of Wine Tim Atkin. Due to popular demand, this edition will feature not one but two Drawing Jams, with French stars La Grande Sophie and GiédRé providing an entrancing soundtrack to the guest illustrators’ drawn improvisations.

In addition to talks and workshops, the festival will host its trademark event, the Drawing Duo, which encourages a French artist and a British artist to collaborate on a series of drawings before the eyes of the audience – an emblem of the festival in a sense. This year, the Drawing Duo is back with two Franco-British collaborations: Posy Simmonds with Etienne Davodeau, and Hunt Emerson with François Boucq.

This festival is also an opportunity to explore the links with literature, and show that the genre of comic books is not cut off or quarantined. In previous editions, well-known literary figures such as China Miéville and Audrey Niffenegger talked about their favourite comic books, and this year, Glen Baxter will unveil his literary influences – from Apollinaire to Jarry – while I. N. J. Culbard, David Zane Mairowitz, Mark Stafford discuss the challenges, and ultimately the magic, of turning a literary classic into a graphic novel. Another highlight of this year’s edition is a talk with French underground literature legend Virginie Despentes, who will reveal her “graphic greats”.

Children will be able to attend workshops to create their own comic book on paper or iPad, masterclasses with celebrated authors to draw their favourite characters, and films for the whole family.

All the French guests have had English translations of their works, with four of them coming out during the festival: 3” (Marc-Antoine Mathieu, Jonathan Cape), Apocalypse Baby (Virginie Despentes, Serpent’s Tail), Peter (Régis Loisel, Soaring Penguin Press) and The Initiates (Etienne Davodeau, NBM).

Drawing Jam with La Grande Sophie
£12 | See both concerts for only £15!