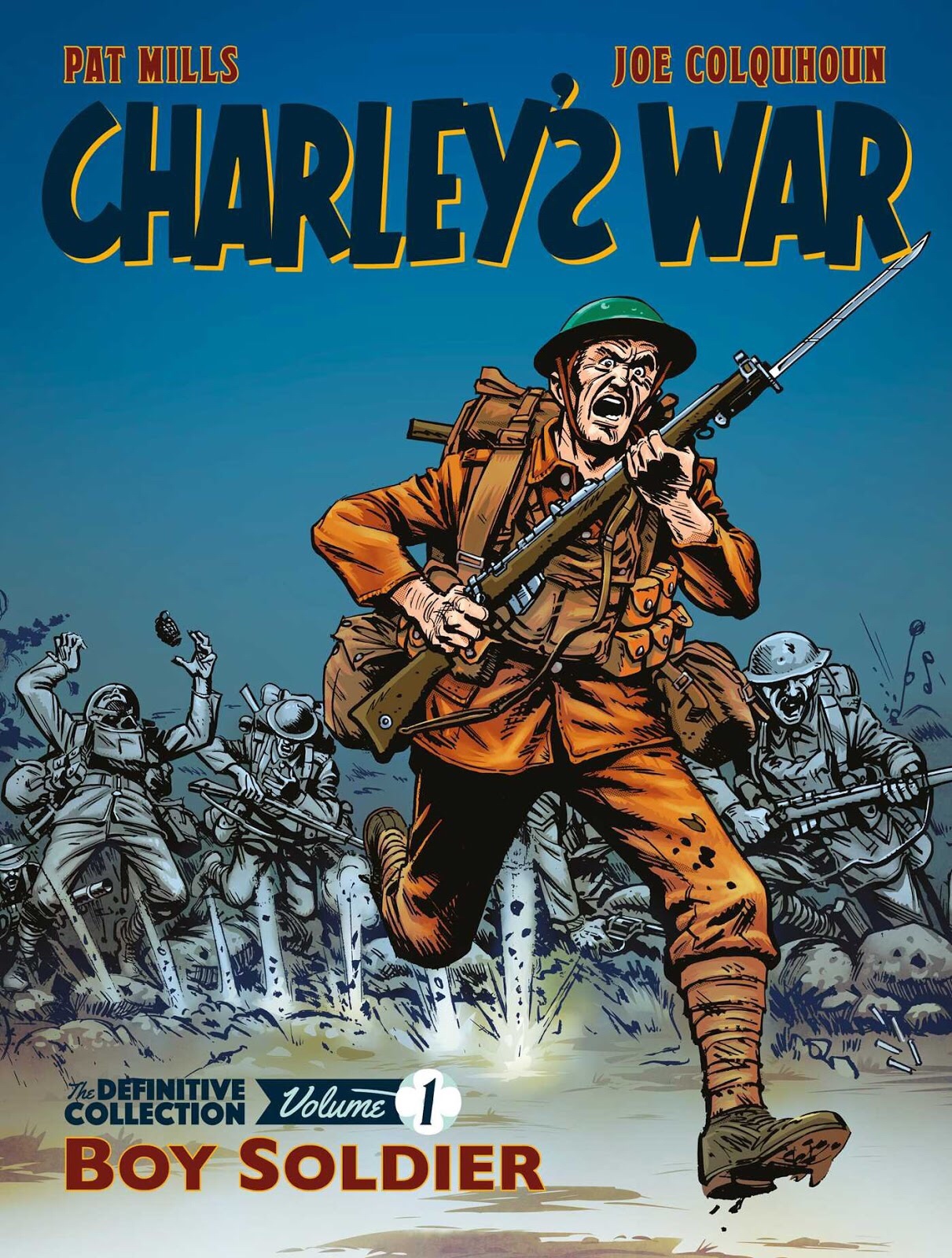 Here’s some details about three bumper collections of the critically acclaimed “Charley’s War” that are in the works for next year, to be published by rights holder Rebellion.

The 20000AD publisher acquired ownership of Battle Picture Weekly, where “Charley’s War” by Pat Mills and Joe Colquhoun first appeared from Egmont last year, along with many other classic comics. The strip, largely set on the Western Front during World War One, had previously been collected and published by Titan Books in ten volumes under licence from Egmont, each volume including background to the setting of the stories and “Director’s Commentary” features from co-creator and series writer Pat Mills.

Information on Amazon indicates these collections will feature the colour spreads from the comic for the first time in English.

(The ten-volume French collections of the strip, published by Delerium as La Grande Guerre de Charlie, previously featured these colour spreads and covers).

Several “Charley’s War” fans have asked about the “re-lettering” mentioned in the previews for the new editions. While later episodes of the strip were hand lettered, early episodes were “machine lettered” for the original Battle publication, which although standard at the time now looks extremely dated and top-notch letterer Jim Campbell has  been assigned the task of giving this vital aspect of any strip a uniform look.

“This new collection of one of British comics’ finest strips is going to look fantastic,” Jim enthuses. “I’m incredibly proud to have had a small hand in its preparation.

“A significant chunk of the machine-lettered pages were re-lettered by John Aldrich (I think) for the original Titan edition,” he reveals, “but not all of them. I’ve basically re-lettered all the non-Aldrich pages. Later on, the strip went to hand lettering anyway, so it’s really only some of early episodes that needed any attention).”

Jim is no stranger to this kind of task, having worked on a number of episodes of “Hookjaw” and “Dredger” for their updated publication in the short-lived STRIP Comics Magazine, but his work on “Charley’s War” was not as complex. (Jim detailed the huge amount of work he did on the “Hookjaw” restoration here on his blog).

“There was neither the budget nor, realistically, the time for a “full ‘Hookjaw’,” he says. “I’ll confess to being slightly relieved — Colquhoun’s art is so detailed and so good, the idea of doing any significant amount of redrawing was pretty terrifying. However, the new lettering doesn’t always sit exactly over the top of the old, so I did some minor re-touching where needed.”

Here’s the full details of each new volume as featured on amazon.co.uk. Note publication dates may change – Amazon isn’t always 100 per cent accurate…

THE MOST RENOWNED WAR STORY IN COMICS HISTORY RE-MASTERED TO MARK THE CENTENARY FIRST WORLD WAR.

Join 16 year-old Charley Bourne as he eagerly signs up to fight on the Western front in 1916. The idealistic working class boy experiences the perilous arena of trench warfare, where every waking moment is a bitter fight for survival.

As visceral, thrilling and compelling as on its debut, this intensely dramatic war story is the finest the comic book medium has ever produced. Written with acute political and historical insight by British comics legend Pat Mills, it is illustrated throughout with the breathtaking artwork of Joe Colquhoun.

This first volume of Charley’s War includes Charley’s harrowing participation in one of the bloodiest encounters in human history – The Battle of the Somme.

• This is both a thrilling comic for readers of any age and a sensitive chronicle of an extraordinary struggle.

• This new edition is re-lettered, with original colour spreads added back in to complement the extraordinary black and white artwork. 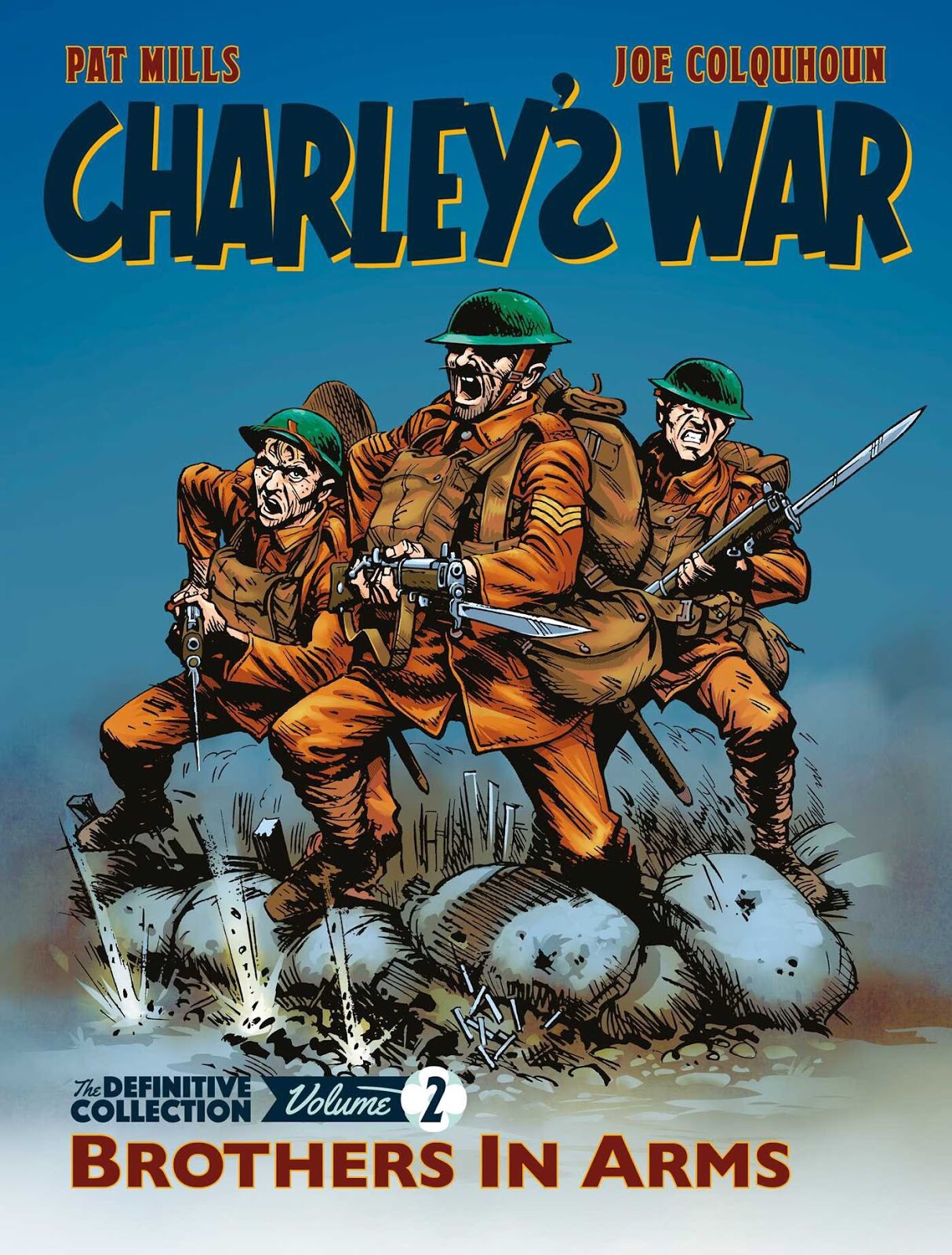 THE GREATEST ANTI-WAR STORY EVER TOLD.

Injured in The Battle of the Somme, Charley returns to wartime London and meets a deserter from the French Foreign Legion, Blue, who tells of his brutal experiences of the Battle of Verdun. All too soon Charley returns to the front line at Ypres where the threat from the German army is matched only by the inhumanity of his superiors! In the face of suffering and injustice, seeds of mutiny begin to grow among the ranks…

This second volume of Pat Mills and Joe Colquhoun’s masterpiece continues to tell the story of an ordinary soldier’s experiences in World War One, including the vibrant re-mastered colour pages from the original comic. 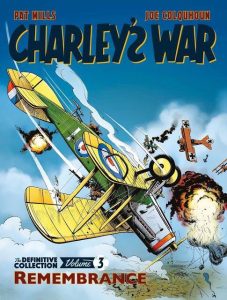 Volume 3 of the most celebrated war comic of all time, re-mastered and collected in a full size edition.

THE GREATEST ANTI-WAR STORY EVER TOLD.

This third volume of Pat Mills and Joe Colquhoun’s masterpiece continues to tell the story of an ordinary soldier’s experiences in World War One, including the vibrant re-mastered colour pages from the original comic.

Pat Mills is the creator and first editor of 2000AD. For the Galaxy’s Greatest Comic, he is the writer and co-creator of ABC Warriors, Finn, Flesh, Nemesis the Warlock and Slaine. He also developed Judge Dredd and helped write one of the early Dredd serials, The Cursed Earth.

With thanks to Richard Sheaf for the information