Amazing & Fantastic Tales #1 out this week 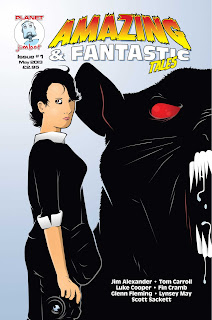 Pulp gets a modern twist with comic strips and text stories combined in Amazing & Fantastic Tales #1, due to be released later this week by Planet Jimbot, the indie publisher set up by Jim Alexander and Jim Campbell.

The first US-format issue includes ‘A Mischief of Devils’; another dramatic day in Hell by Tom Carroll, with art by Fin Cramb; ‘The Last Posse’ by Jim Alexander with art by Scott Sackett in which, to find a missing child Wyatt Earp gathers up a posse, including the Cisco Kid and Belle Starr, of famous character from the Wild West.

‘Kroom’ by Jim Alexander with art by Glenn Fleming opens with a mysterious alien falling from a portal in the sky; what does he hope to find; what is he escaping from?

‘The Roustabout’ by Lynsey May and Fin Crumb is suspense-filled horror story set on a wind-swept oil platform.

Finally, in ‘Deadlines’ by Luke Cooper (probably my favourite story in this issue) just what is the Wererat of London?

• Amazing & Fantastic Tales #1 cost £2.95 plus p&p and is released on 30th March 2013. To purchase, contact Jim Alexander direct  at planetjimbotATgmail.com or find them on sale for Jim at a con or mart.

• Jim Alexander will be selling his titles at the Dundee Comics Expo (Table 7, College Hall) on Saturday 30 March 2013.