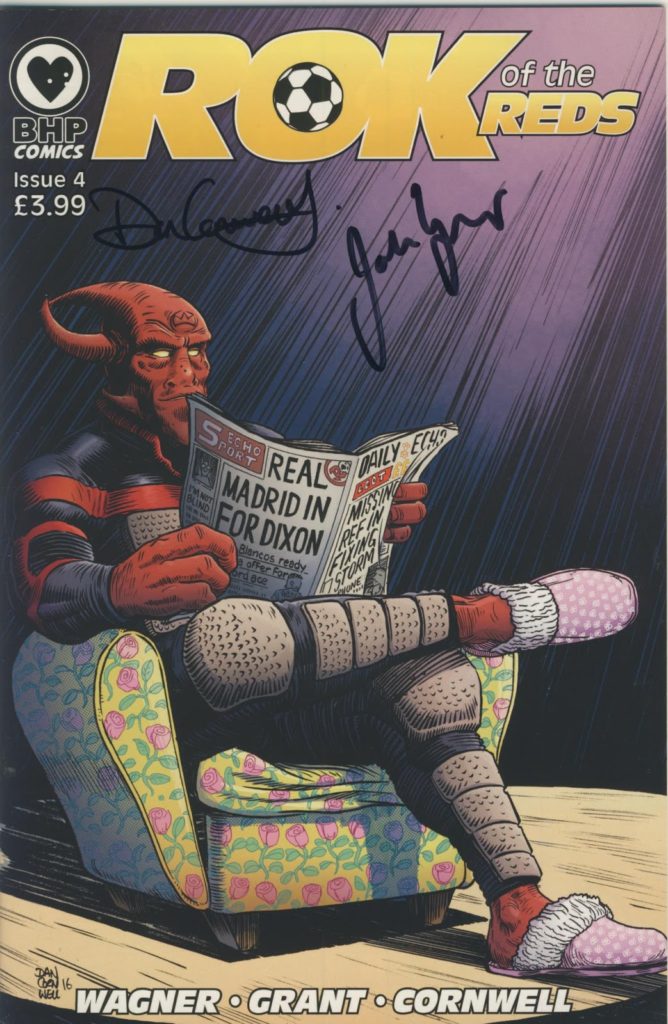 Note that not all copies of “Rok of the Reds” are disfigured by the creators autographs.

Industry legends John Wagner and Alan Grant (Judge Dredd, Strontium Dog, Judgement on Gotham, A History of Violence) team up once again to bring you Rok of the Reds alongside stunning art by Dan Cornwell.

Rok of the Reds is a six part series showing what happens when the lives of a dangerous intergalactic outlaw and an arrogant footballer collide. With his home world destroyed, Rok of Arkadi is on the run and needs a hiding place. And that hiding place happens to be troubled football star Kyle Dixon.

Without giving away too much, in the latest issue, as Rok/Kyle start to consider the future via a classic Roy of the Rovers-style cup run, trouble is brewing behind the scenes via the Fourth Estate and his own parents!

Rok’s days of sitting on the comfy flowery armchair in his slippers appear to be numbered – but only once the cup semi-final is out of the way, surely?

A black comedy about revenge, redemption and the ‘beautiful game’, Rok of the Reds is one of the best independent comics out there right now.

Richard Sheaf is a longtime contributor to downthetubes and has written for numerous magazines about British comics.