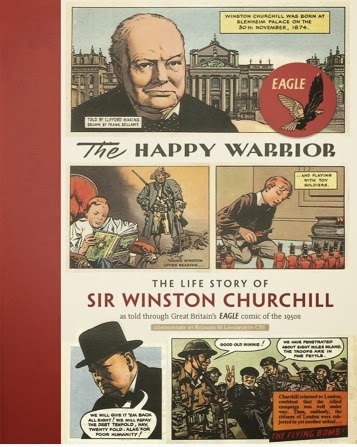 Unicorn Press is to release anew collection of The Happy Warrior: The Life Story of Sir Winston Churchill, written by Clifford Makins and drawn by Frank Bellamy, in March.

The strip was last re-published in the United States only in 2008, by Levenger Press (see the excellent Frank Bellamy checklist for details) and in the UK by Dragon’s Dream in 1981, as High Command: the Stories of Sir Winston Churchill and General Montgomery.

“To so many British children growing up in 1950s and 1960s Britain, Fridays meant only one thing – thousands of youngsters would race to their local newsagents, pennies in hand and sometimes parents in tow, to buy the latest edition of Eagle comic,” notes Unicorn Press in its press for the collection. “Each issue of the Eagle was chocablock with adventures and exciting new pastimes for boys – from Dan Dare, to Extra Special Agent Harris Tweed, from tips from the pros on boxing and jiu jitsu, to advice on the care of goldfish.

“In the 1950s, the comic embarked on an ambitious series chronicling the life of some of Britain’s most famous men – Nelson, Baden Powell, Alfred the Great, Montgomery and Churchill, to name a few. Here we have the complete set of Eagle comic strips which tell the story of Winston Churchill’s life – his birth at Blenheim, his education at Harrow and Oxford, his time in the army as well as his appointment to government and eventually to his stint as War Leader. The Eagle Comic nurtured the imagination and garnered the ambition of a generation brought up in a grey postwar Britain, and helped to shape the nation we know today. This book is a reminder of how the Eagle helped to inspire a generation.” 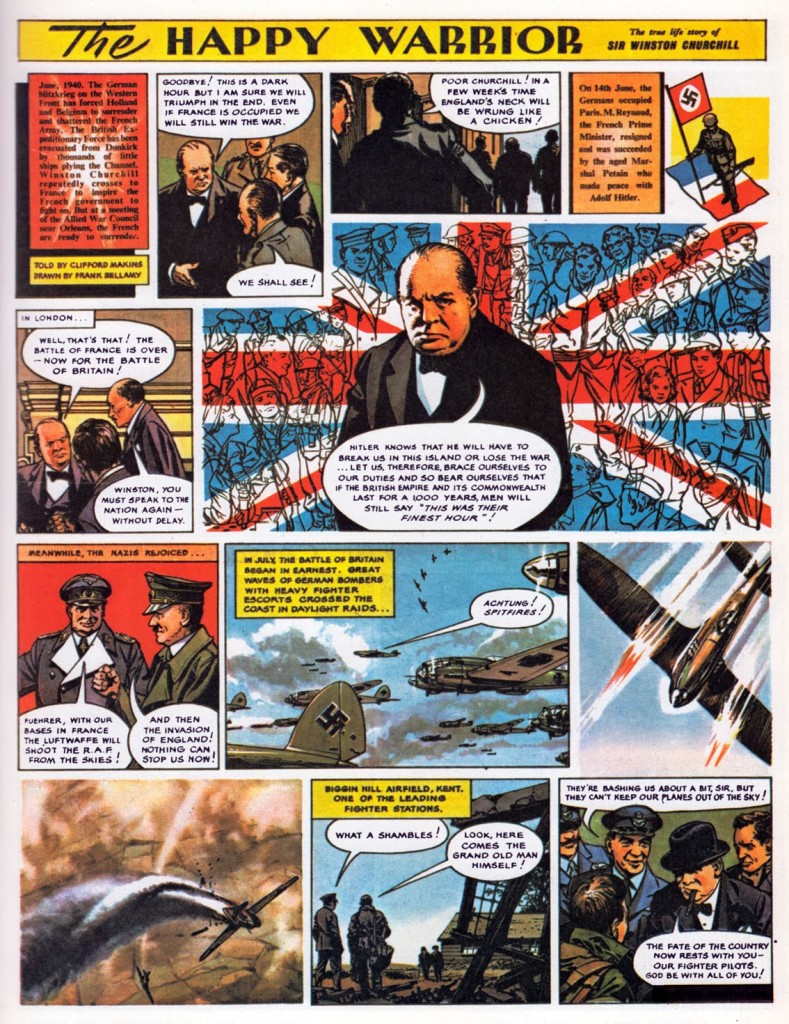 A page from “The Happy Warrior” by Clifford Makins, drawn by Frank Bellamy

The Happy Warrior, the life story of Winston Churchill, written by Clifford Makins, first appeared in Eagle in 1957/58. The strip ran on the back page of Eagle, a spot previously reserved for heroes of the past. The Frank Bellamy Checklist site notes that creating the full colour strip worried Bellamy, but it has been acknowledged as one of his best over the years. Such was its initial success that Eagle’s publisher, Hulton Press, quickly re-packaged and published the first collection of the story back in 1958, accompanied by ten pages of photographs. 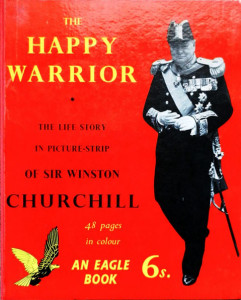 The Happy Warrior: the Hulton Press edition, published in 1958

“Frank Bellamy’s dynamic artwork and inventive layouts made quite an impact on comic readers of the 1950s to 1970s,” enthuses Lew Stringer on his blog post about this new release. “Sadly the artist passed away far too young at the age of 59 in 1976 – but he left us with an incredibly high standard of work that still impresses readers old and new.

“I recall that this weekly, full colour series of full pagers was collected before, about 30 years ago, but that book is long out of print.”

This new collection of The Happy Warrior joins other books featuring Frank Bellamy’s art, including his work on for Thunderbirds and Garth, as well as Robin Hood: The Complete Adventures for Swift and the stunning Book Palace collection of Heros the Spartan.

Unicorn Press has been publishing high quality cultural history and art books since 1985. Their imprints  include Uniform Press (dedicated to military history). The company has published a number of Winston Churchill books, including Sir Winston Churchill: His Life and His Paintings, last year.

With thanks to Lew Stringer for spotting this