2000AD incarnation of Dan Dare to be reprinted at last 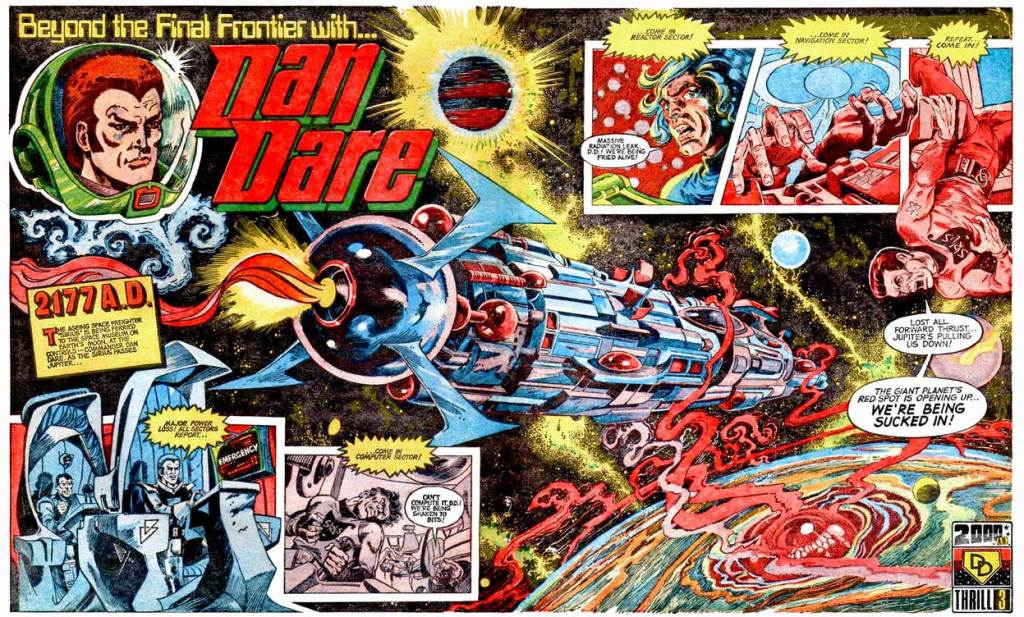 Rebellion, the publishers of 2000AD and Judge Dredd Megazine, have announced collections of the “Dan Dare” stories published in early editions of the Galaxy’s Greatest Comic.

The company says it is planning to release the first of a two-volume series in autumn 2015, featuring five main stories comprising a total of 47 episodes, with an additional six standalone stories. It will include rare art by Dave Gibbons, a regular contributor to the series. It is, says Rebellion, “the last, great unreprinted story from 2000AD’s first issue”. 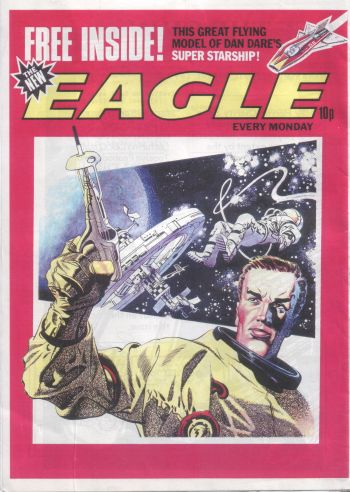 A 1970s dummy for a proposed new Eagle featuring art by Frank Bellamy.

Rebellion will not be drawn at this stage on whether these collections will feature new covers or supporting material that might officially reveal what 2000AD‘s plans for Dan Dare were before his series ended in the comic in 1979, curtailed by IPC’s plans for a new Dan Dare comic that would have been shaped around the aborted Dan Dare TV series from ATV.

The gritty, hard-nosed Dan Dare of 2000AD was a very different character to  the original from the 1950s Eagle. But it is that characterisation that appears to have shaped his most recent mainstream incarnation for Virgin Comics in 2008, written by Garth Ennis and drawn by Gary Erskine. (Spaceship Away continues to publish stories featuring the original Dan Dare).

Although the original “Dan Dare” ceased regular publication in 1969, there were several attempts to revive the character which we have previously detailed here on downthetubes, including one that featured sample artwork drawn by Joe Colquhoun, better known for his work on “Charley’s War” and “Johnny Red” for Battle. But it was not until the debut of 2000AD in 1977 that Dan reappeared as a regular comic character.

Initially written by Ken Armstrong and Pat Mills, followed by Kelvin Gosnell and Steve Moore, the first adventures were drawn by Massimo Belardinelli and saw Dan revived from suspended animation after two hundred years to find himself in a different world but still, on occasion, pitted against The Mekon.

Belardinelli’s 23-issue run on the strip would appear to have been one step too far for Dan Dare fans, as, after a one month break, the strip returned with a more realistic makeover in the hands of writers Gerry Finley-Day and Jack Adrian (Chris Lowder) and drawn by Dave Gibbons.

With Dare sent on a deep space mission, Gibbons’ art was far more akin to the original, reflecting the popularity of Star Wars at the time with realistic, high tech spacecraft as well as the kind of hard-hitting action 2000AD is well known for. A grim storyline pitting Dare against the “Star Slayers” left him the only survivor of the mission, cast adrift in space.

When the strip returned in 1979 in 2000AD‘s 100th issue, an amnesiac Dare was rescued from space by the Mekon and indoctrinated into the Mekon’s army before eventually recovering his memory. Written by Tom Tully but still drawn by Dave Gibbons, at this point he became more of a superhero-styled character, even gaining a “Cosmic Claw” – but he and his Treen companion Sondar are branded traitors to Earth after he helps the Mekon acquire the mystical Crystal of Life.

Dare’s run in 2000AD ended in Prog 126,just before 2000AD merged with Tornado, with him on the run and trying to clear his name – but the storyline was never to be resolved and he never returned to the comic.

The final pages of Dan Dare in 2000AD Prog 126, with Dan on the run and branded a traitor. This image includes part of the announcement for the cancellation of the planned Dan Dare TV series which featured in Prog 197.

“The ending showed Dan leaving Earth to track down a shapeshifter and thereby clear his own name of crimes committed by the shapeshifter while in his form,” notes artist Gavin Aslett in a response to a feature by Paddy Brown on the 2000AD Dan Dare, who created a his own conclusion to the 2000AD incarnation with a 36-page strip, “Journey Through Time“.

“This was only intended to be a temporary resting of the strip necessitated by the merger.

“The plan was for Dan Dare to return to wind up all the loose ends of the final story,” Gavin says, having written to 2000AD in 1979 asking why Dan Dare did not return, “and to then travel back through time with Sondar, who had come forward through time to find him. The time trip would end in a fatal crash, killing the 2000AD version, but in doing so saving his original self from the accident that would lead to the 2000AD version in the first place.

“The reasoning behind this planned temporal anomaly was to pave the way for a new Dan Dare comic to tie-in with a live action TV series starring James Fox which was quite close to production at the time. The TV series was cancelled and 2000AD never bothered to wind up the story.”

Eventually, a New Eagle comic with another take on Dan Dare (this one a descendant of the original) was launched in 1982 and the 2000AD take on the character was forgotten, although a speculative issue of 2000AD published in 1997 called 3000AD , featuring stories based on strips from Prog 1, did include “The Return of Dan Dare” and the return of the Mekon.

“Dan is still, to this day, seen as something of an old-fashioned hero – the original strips in the Eagle were formed from a very British idea about space exploration and the future, very different to the ‘wild new frontier’ of most American fiction,” feels 2000AD‘s spokesperson Michael Molcher, quoted in The Guardian. “So that’s why 2000AD’s Dan Dare is important – his popularity in 2000AD not only helped kickstart the 1980s revival of Eagle, but also showed the character could adapt to a new age.”

“From uniting slave races against the oppressive Star Slayers to being left adrift in space and then indoctrinated into the Mekon’s army, transplanting him into alien surroundings meant the strip could have a darker edge than before,” Molcher says of the 2000AD incarnation of Dan Dare that, despite its striking art, left fans of the original, stiff-upper-lip character cold.

Molcher, noting the impact of Star Wars on SF in the 1970s notes the, Boys’ Own Adventure feel of the original stories was left behind “in favour of stories full of dangers even the Mekon was afraid of.

“At the time, this was a radical departure, and many of his older fans didn’t take too kindly to it.” 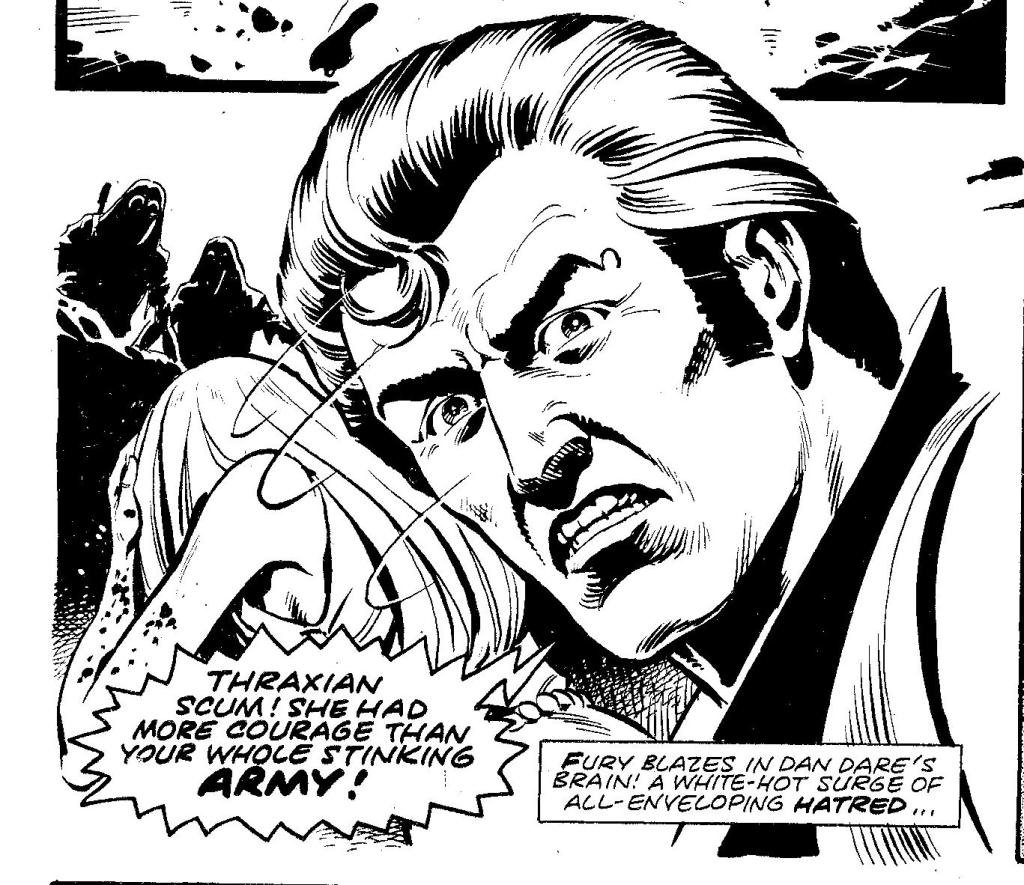