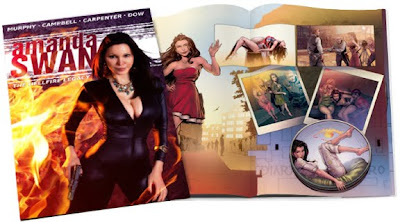 Glasgow based Rough Cut Comics have impressed before with their vampiric Rose Black and Rose Black: Demon Seed graphic novels. As part of the publicity for Rose Black, the company used British model Amanda Swan to portray the character of Rose but they soon realised that there was the possibility of basing a comic around the model herself. Amanda Swan: The Hellfire Legacy re-imagines her as a reality show IT girl by day and a leather-clad motorbike riding vigilante by night – a 2012 vigilante who has a strange connection with the Hellfire Club of 1858 London.

Written by Ed Murphy and Tom Campbell with art by Joel Carpenter and colours by Derek Dow, the same team as Rose Black: Demon Seed, Amanda Swan: The Hellfire Legacy is a 32 page prestige format, full colour comic and is currently only available from Amanda Swan’s own website for a cover price of £4.99. The title will be released to shops on May 2012 when the creative team and Amanda Swan herself will be appearing at the Kapow comics convention in London’s Business Design Centre.

There are more details of Amanda Swan : The Hellfire Legacy on the Rough Cut Comics Facebook page and blog and the title can be bought directly from the official Amanda Swan website shop.

Amanda Swan and Rose Black writer Ed Murphy will be appearing at at the Graphic Novel Night at Meadowbank Library in Polmont near Falkirk on Saturday 21 April 2012. There are more details of the event on the library website.