The Mystery of Tharg’s 3rillers 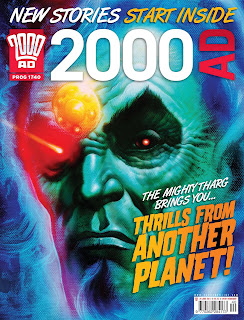 (Above: The cover to Prog 1740 by Liam Sharp. Click on the image to see a larger version.)
Prog 1740 of 2000 AD (released in shops next Wednesday, 29 June 2011) is designed as a potential ‘jumping-on point’ for readers. Its line-up consists of a new Dredd story, fresh installments of three already established series and something called Tharg’s 3rillers. The latter has been a bit of a talking point online, with fans speculating as to what Tharg’s 3rillers might be. Of course, here at downthetubes we’re fairly pro-active. Instead of speculating therefore, we sent intrepid reporter Matt Badham to speak to Tharg’s human representative, Matt Smith, about what this new series is.

The following mini-interview was the result:

Matt Badham: Lots of discussions online about Tharg’s 3rillers, which debuts in Prog #1740. Prevailing theories are that these are either three-page one-shots or three-part mini-series. What are they?

Matt Badham: Why have you come up with this new strand?

Matt Smith: I had a nine-part slot going free, and I thought, rather than commissioning a standard series, I’d try something a bit different – 3 three-part stories, complete to themselves, not tied to any other 2000 AD property. I thought readers (especially new readers) would appreciate something that didn’t require knowledge from 2000 AD’s thirty-four-year history. They’re a mix of genres too – the first one (The Silver-Tongued Exploits of Cosmo Nibs by Tom Eglington and John McCrea) is an SF comedy, the second (Six Brothers by Alec Worley and Mike Dowling) is a supernatural crime thriller, and the third (Wolves by Arthur Wyatt and Steve Yeowell) is a dark future-war story.

Matt Badham: Can people send unsolicited pitches for Tharg’s 3rillers or are they a way for you to nurture already established writers (those, say, who have got a fair few Future Shocks under their belt)? And what about artists?

Matt Smith: I’m not looking for any 3riller submissions. If they prove popular, I’ll commission more as the schedule permits, but I’ll punt them out to writers and artists that have already got a bit of experience.

Matt Badham: Are these 3rillers going to act as ‘pilots’ for ongoing series?

Matt Smith: Possibly, if the potential is there. I’d prefer the ‘three hits of Thrill-power and you’re done’ approach – one story, bang, move on.

Matt Badham: Prog #1740 is a potential jumping-on point for new readers (or, I suppose, old readers who have fallen out of the habit of picking up the Prog). Please tell us what other strips are in that issue and why people should pick it up.

Matt Smith: Judge Dredd: The Dasterdly Deeds of PJ Maybe by John Wagner and Colin MacNeil; Savage Book 7: Secret City by Pat Mills and Patrick Goddard; Zombo: The Day the Zombo Died by Al Ewing and Henry Flint; and Sinister Dexter: Charon’s Crossing by Dan Abnett and Anthony Williams. Plenty of action, irreverence, bullets and people’s eyes being sucked out by balloons. Try finding that mix of elements in any other comic out there. Thirty-two pages for £2.25 (Earth money) – zarjaz value, as the Mighty One would say!

Matt Badham: Thanks, Matt, for taking time out of your schedule to answer my questions.
Matt Smith: My pleasure.
Update: There are more details over at the Everything Comes Back To 2000 AD blog.
For more on 2000 AD, go to their official website.

‹ Major comics conference in Manchester in July
Commando’s Half Century ›