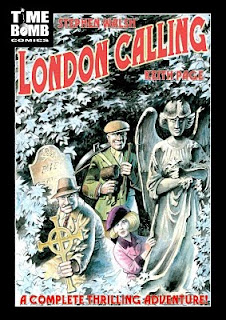 Artist Keith Page, best known for Commando but who has also illustrated Thunderbirds and Dan Dare over the years, has an unusual character in the form of dimension hopping French agent Charlotte Corday whom Page considers to be something of a Jerry Cornelius figure — although Garth or Adam Eterno might be closer from a comics perspective.

With a story by Commando writer Stephen Walsh, London Calling places a confused Charlotte in 1950s London in which not everything is quite as it should be. During World War II, the French experimented with giving their troops vampire blood to try to make them impervious to bombs and bullets but post-war this backfired with an outbreak of vampirism in the country. To prevent the vampires taking over Paris the city was taken out of time using captured Nazi technology and now, as it tries to return, it is causing ripples in the fabric of time that are affecting Charlotte Corday in her undercover mission in London.

There, befriended by a charming vampire called Luca and while looking for another French agent, she gets caught up in a raid on a vampire club by the Metropolitan Police’s V-Squad and is arrested suspected of being a vampire herself.

The whole plot is book ended by a different Charlotte recovering her children from a flooded London and telling them the story of the book to pass the time.

As the above might suggest the main story is a little bizarre. This is partially deliberate, due to the time ripples caused by the French which throw up images of a Nazi-occupied London, HG Wells’ Martian invasion and Orwell’s 1984, but also because there is just too much trying to happen.

As much as I would like to read more about the French vampire problem, I think that a straight French agent caught up in the London vampire underworld would have worked better without the whole out-of-time-Paris trying to contact a confused Charlotte, which only serves to confuse the reader as well.

That said, there is much to recommend the book. Stephen Walsh’s script revels in in-jokes from TV film, radio and novels – they come thick and fast and I’m sure that I didn’t even catch them all. Keith Page’s black and white artwork, so familiar from his many issues of Commando, has more depth and detail that that title allows for and his designs for the V-Cars squad with their black cars, Vespa scooters and crossbows will raise a smile while he manages to get many faces familiar from 1950s and 1960s film and TV into his crowd scenes.

Charlotte Corday has had a somewhat unusual history with stories appearing on the ROK Comics mobile comic platform and on Keith Page’s blog before finally appearing in this softcover black and white book and now in the hardcover colour book, The Iron Moon. Full marks must go to Steve Tanner of Time Bomb Comics for choosing to publish this first paper version of the Charlotte Corday character. With the majority of Time Bomb’s output being colour US size comics, a 52 page, A4, black and white graphic novel is a step in a new direction for the publisher.

With its story and artwork brimming over with ideas, London Calling is an impressive first outing for Keith Page and Stephen Walsh’s Charlotte Corday character which is worth looking out for.

• There are more details of London Calling and how to purchase it on the Time Bomb Comics website. Keith Page’s blog with previews of future issues of Commando and other graphic novels that he is working on is here.