Will Sci-Fi Star George Be King of the Jungle? 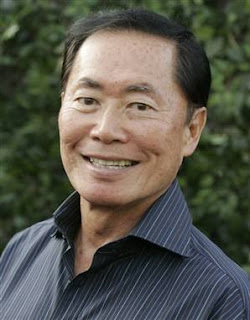 Sci-fi icon George Takei, Star Trek‘s Mr Sulu, is one of the finalists in this year’s series of ITV’s hit reality show I’m A Celebrity Get Me Out of Here!

ITV viewers will discover tomorrow night whether George will beat the other two contestants to make it through to the final, tennis legend Martina Navratilova and former Eastenders star Joe Swash.
Aged 71, George has more than proved to be up to the physical challenges of the show, with his many and varied experiences including skydiving from a ‘plane, falling down a steep drop and being taught a bawdy cockney song by fellow star Joe Swash.

Reality TV highlights a person’s real character perhaps more than any other type of television show, and it’s great to know that George has proved to be a real gentleman. He thoroughly deserves his success in becoming one of the last three from the original group of 12 celebrities.

‹ Dark Inheritance by Roberta Leigh
Planet of the Apes – Down the Tube! ›

Please note - some interviews and feature items from older versions of the web site are still archived. We continue to add these as time permits. The Internet Archive "Wayback" has archived downthetubes since its inception